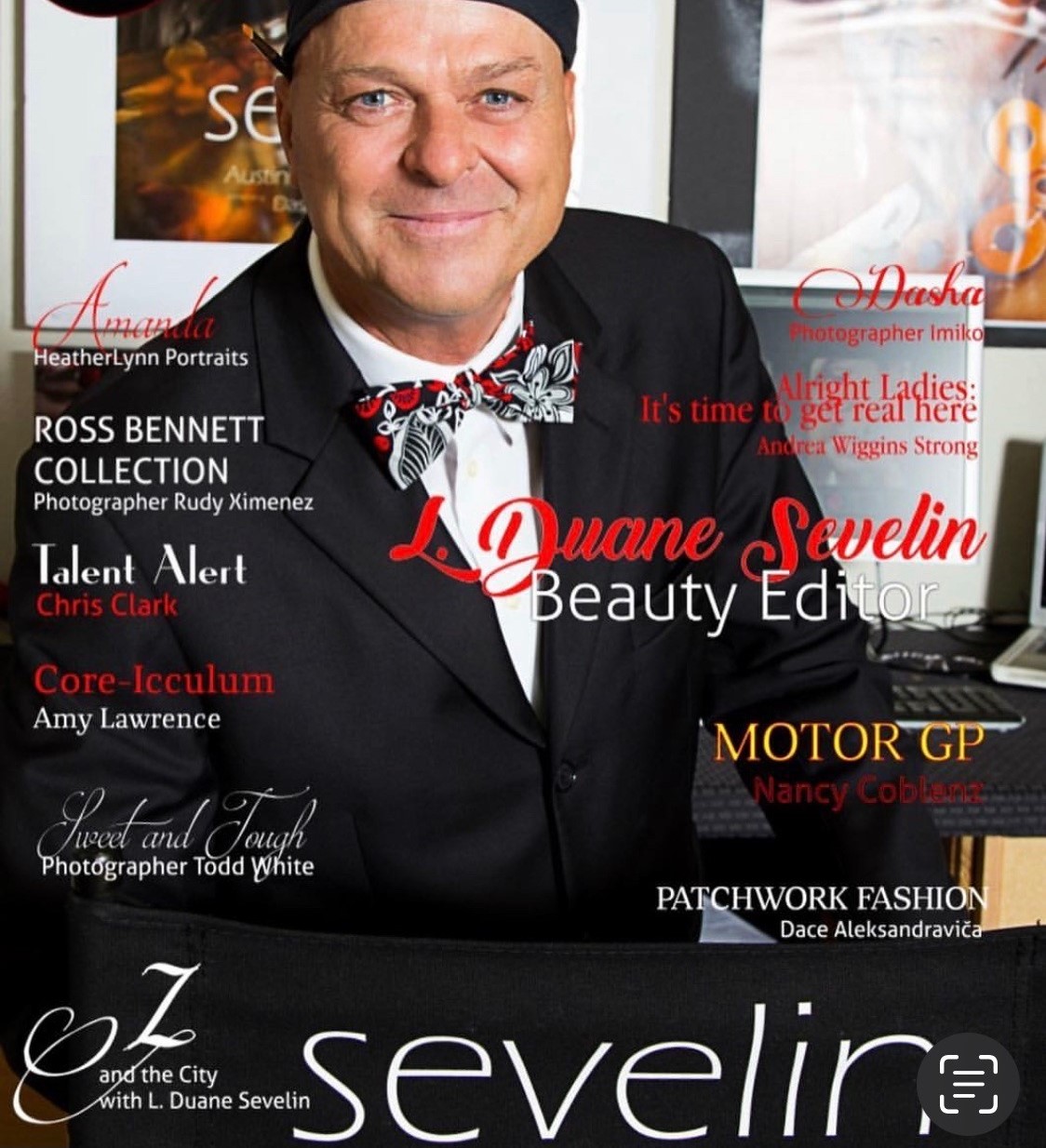 Alright – so today we’ve got the honor of introducing you to L.Duane Sevelin . We think you’ll enjoy our conversation, we’ve shared it below.

L.Duane , appreciate you joining us today. Earning a full time living from one’s creative career can be incredibly difficult. Have you been able to do so and if so, can you share some of the key parts of your journey and any important advice or lessons that might help creatives who haven’t been able to yet?

We’ll to be honest my story is unique as I’m sure many artist will say. I was raised partly on a hog farm so I learned how to weld, farm, construction, fencing, all these kind of things which is also creative if you think about it you’re using your hands to create your environment.

So wait 20 years… Being a make-up artist in the 70s was not so easy as it is today.
No social media no mobile phones you had to pound the pavement
Personally I was fortunate because I was picked as a model for Aramis which is part of Estée Lauder. Being an artist I was infatuated with make up. I did sell my first piece of art. It was a pastel on canvas for $12.00 And I thought I was a working artist. I was in seventh grade maybe But really got into make up in theater in high school So back to cosmetics I worked behind the counter so apprenticeship is very important. however I was the first guy for Estee Lauder as a counter manager so selling is a really good part especially when you’re trying to sell yourself. selling yourself is going to be the most important part of any creative unless you have a manager that speaks for you but I think you can sell yourself better than anyone, by showing your work. I let my work speak for itself.

In my situation I had two tiers. one was the creative and one was the corporate. although I did not have a large payroll at the time corporate kept me fed and my bills paid so that I could be more creative as a freelancer. 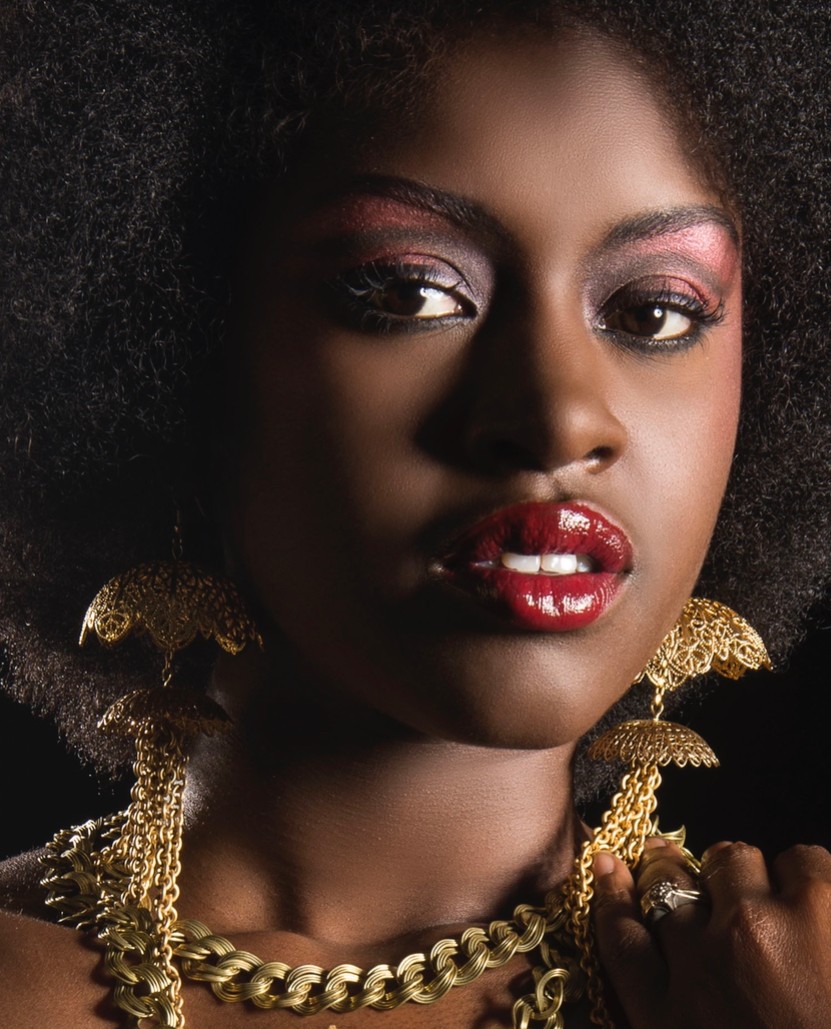 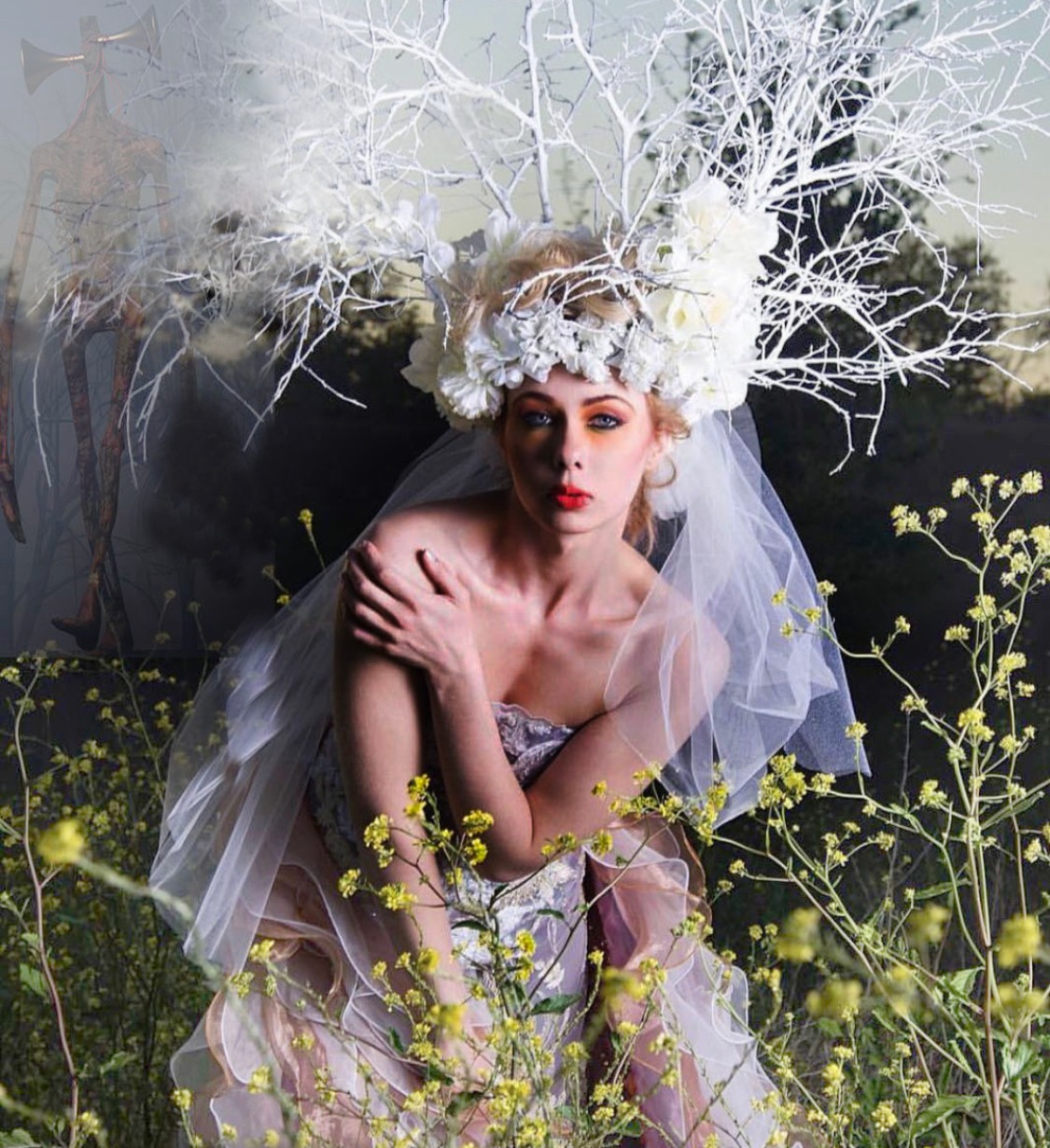 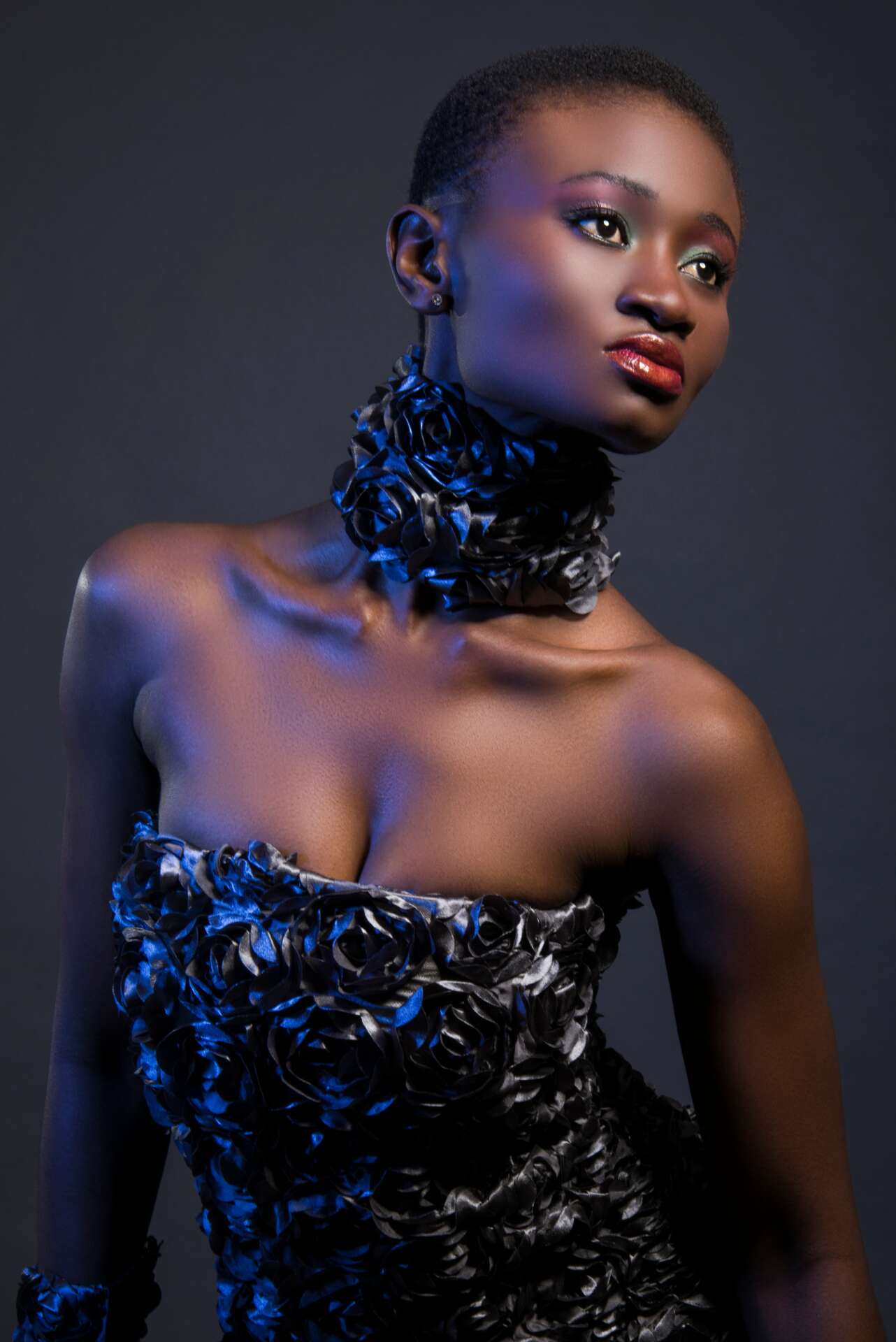 L.Duane , before we move on to more of these sorts of questions, can you take some time to bring our readers up to speed on you and what you do?

Actually even as a preteen I was always creating stuff and although I wanted to be a marine biologist and oceanographer because of my love of science my guidance counselor told me you cannot do the math stick to the arts so I did continue my art theater and modeling got me my first big gig with Aramis. A traveling model for Devon the country cologne of Aramis a part of the Estée Lauder corporation while I was in the store as I saw that Makeup was beginning to be very attractive to me and see the creations that go on just like in the theater but you actually getting paid so I trained for free for about a year and all the different locations in the Tampa Bay area until I finally got my own position as make up artist, The first male counter manager for Estée Lauder in the US . I received “store of the year and soon after it was New York City . I was head make up artist in Bloomingdale’s after my time, with Lauder, I was asked to join Revlon/ Fine Fragrances. As, the RegionalTraining Director for all the Macy stores and the BAltman stores including working directly with Mr. Blass , launching his fragrance in Hearld Square NYC Advancing to world artist in the Far East and Australia my duties were to create new action in the area develop new products suitable for the demographics in Hong Kong Singapore, Indonesia, Thailand , Japan after 3 years of overseas travel, my contract ended.

Soon after I left for Milano to start my freelance career. and believe me it is not for the faint of heart I did go to Milano with only seven photos but I had the reputation from Revlon so that helped a lot but not doing hair at the time kept me from getting a lot of work so I studied with some major Italian hairdressers and begun Stehling and getting more and more jobs I taught myself Italian which is what they prefer and began to working with all the major designers supermodels celebrities from all over Europe and my freelance career began in Milan.Going back to NYC after Paris, London, Munich, Hamburg and all over Italy was bittersweet, but NYC was home.

I worked with Linda, Pat, Jerry Hall Iman, Janice Dickinson, Carol Alt, Kathy Ireland Isme, even GIA. Those were the days, big budgets, and the streets of the city. One of my clients was Eleanor Lambert and I worked with Halston, Akira and many others however I met some producers in the TV business at the time cable was just expanding and becoming really huge I got involved in the Soap magazines and all through the 90s I was Mr. Soap lol.

I worked with Kelly Rippa, Ricky Martin Sarah Michelle Geller and many many other daytime superstars who can be seen in my portfolios with one special exception my dear friend Robyn Griggs from Another World Just recently passed and will be missed by all continuing on I started with Nickelodeon where I was make up for blues clues Rugrats noggin all that for the producers on location the same with lifetime television or USA networks and many other cable stations you didn’t have to be union you could do both hair and make up so I got passed from executive to executive from Oxygen Lifetimetv nickelodeon etc. then 9/11 came and went and clients decided to stay outside of New York City for a while that’s when I decided to move to Barbados I was working there for many years, before so I decided to move my production down there where I stayed for about 10 years I recently came back to the US in 2015 where now I am located in Tampa Florida so it’s become full circle I’m extremely pleased to be back in my southern roots.

I guess for now I’ll be looking forward to launching my cosmetics I based my cosmetics on simple formulations easy to use products all my packaging is sustainable recyclable and soon I’ll be making my packaging out of hemp the organza bags that hold my products will be hemp and then mixing polymers with hemp fabric I will create packaging without paper.

The new sevelin survival kit will be available soon . I did introduce this product about 20 years ago and had some good response but now we’re going to be using hemp products for the packaging for these items as well which will range from pouches mini backpacks arm band which will hold your SevelipsCBD.

Speaking of which I’ve launch the sevelips metallic lip glasses and sevelips CBD@sevelin.com along with some of my other new Face and Cheek palettes, the Dragonfly Collection. Reminiscent of the Phoenix. The dragonfly, also represents rebirth cleansing, focus and “rise from the flames” to begin anew. But one thing the dragonfly has is 360° eyesight which means he can see in front and back, forward and reverse, keeping his eyes focused on everything around.

Please check out all the new products at www.sevelin.com 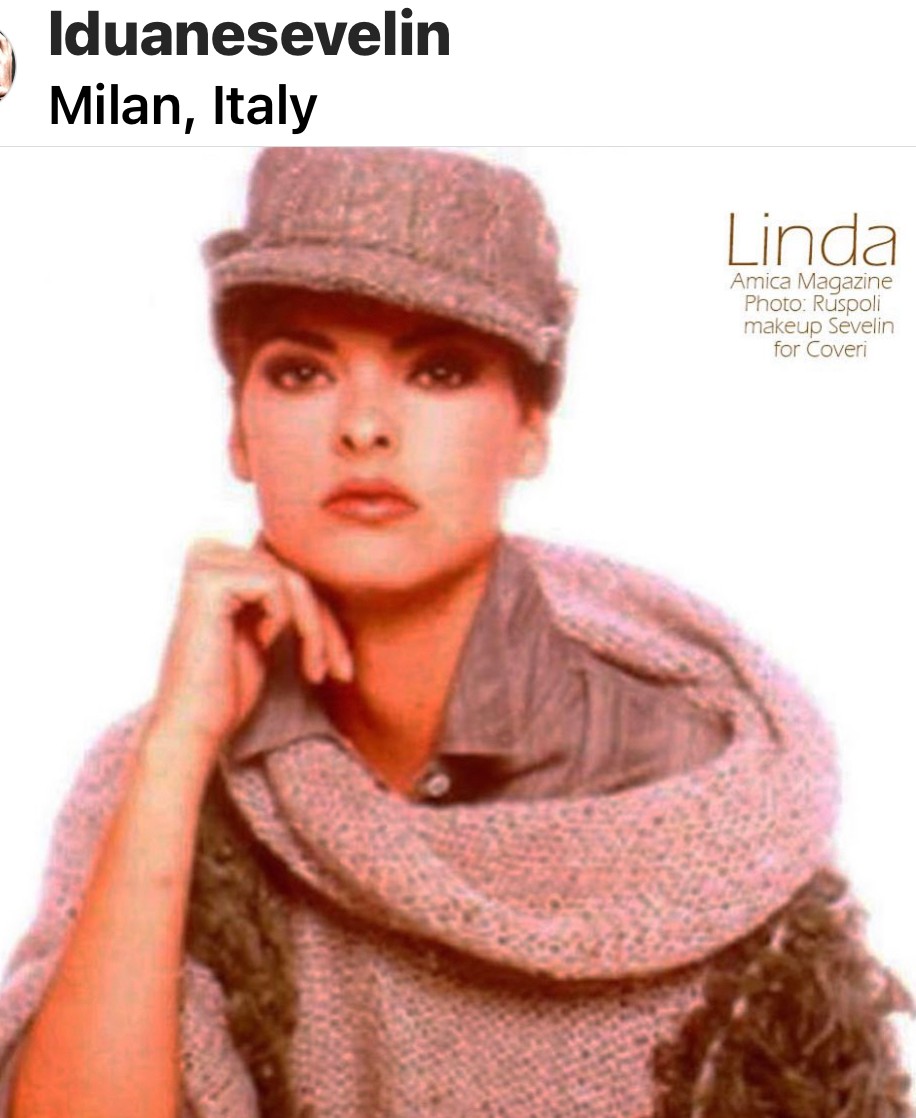 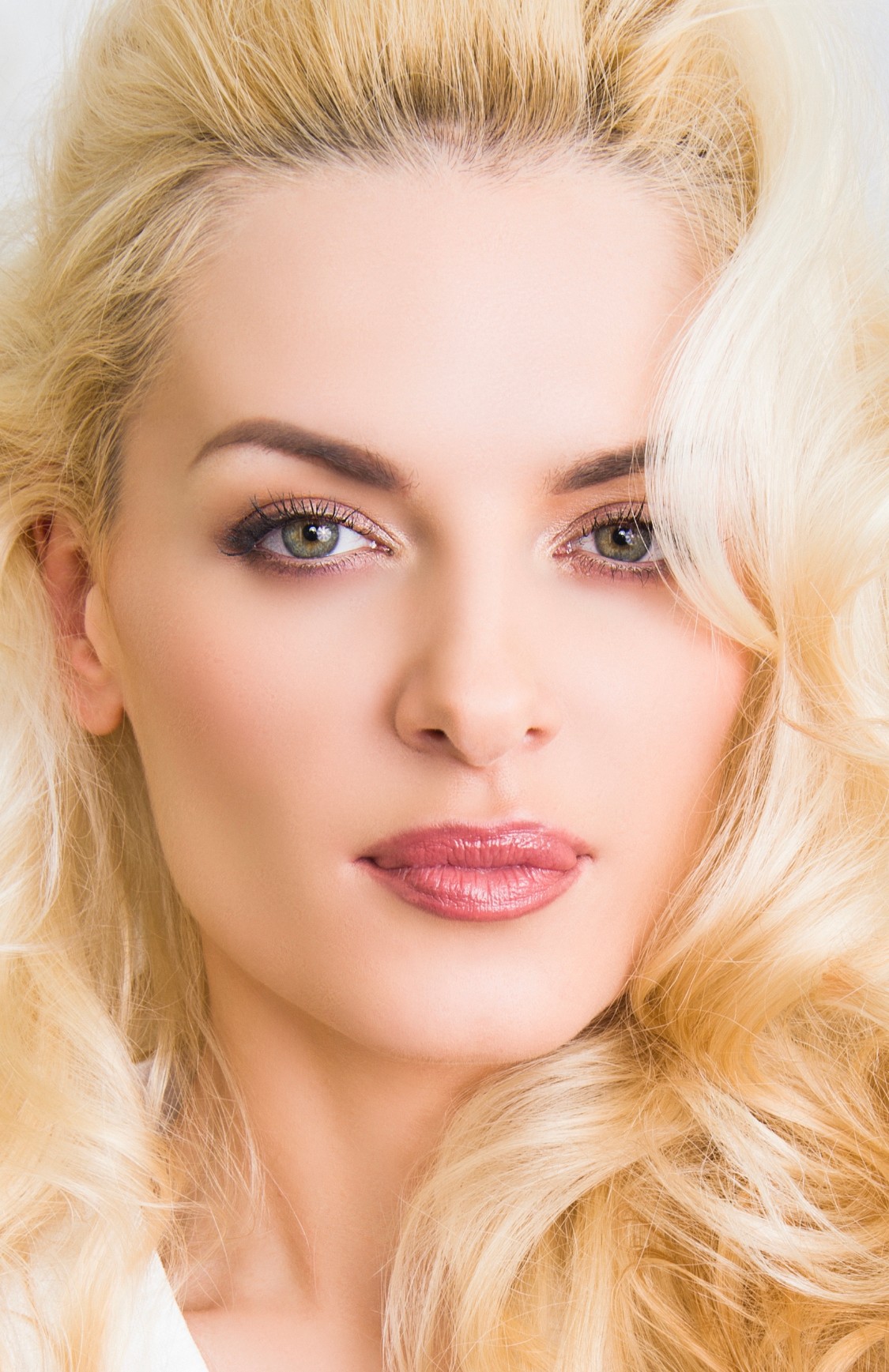 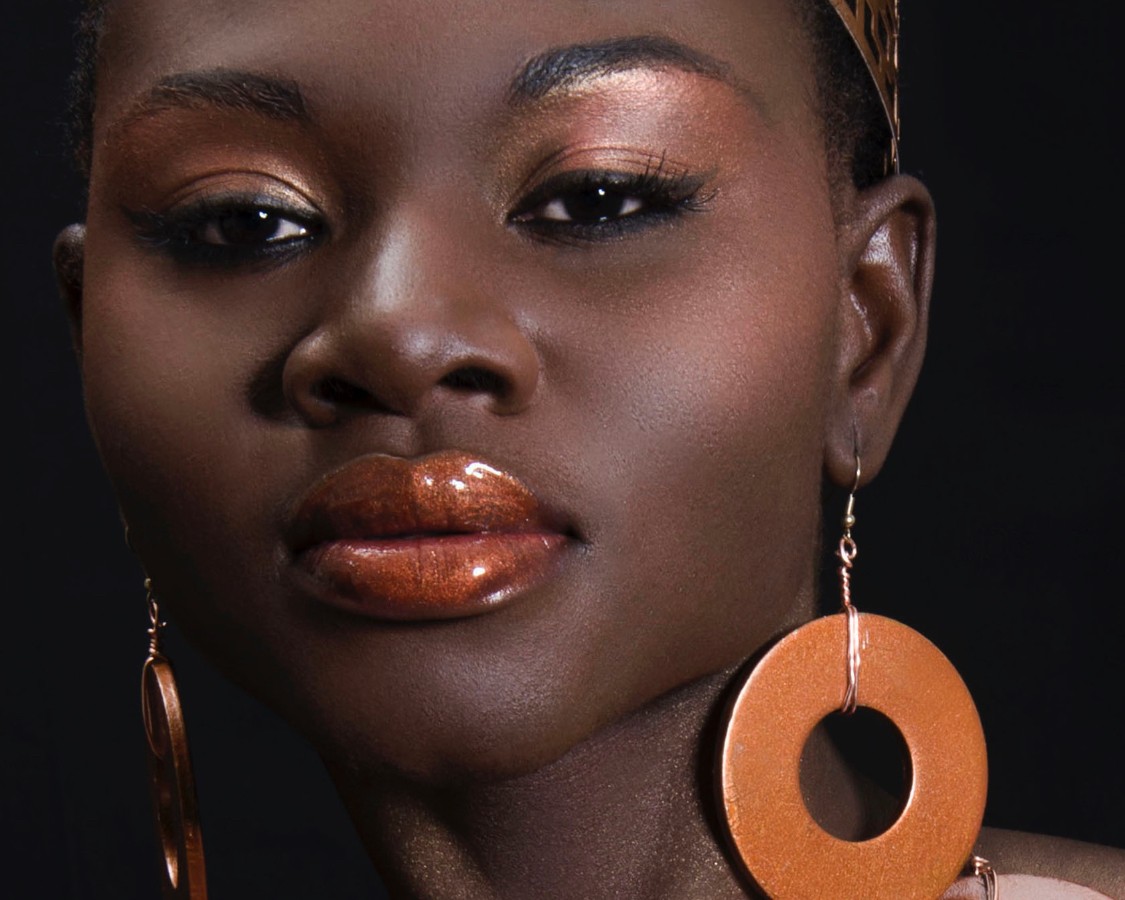 well over the years I’ve changed my mind about this subject so many times I think of the award shows that I’ve worked on celebrities that I’m able to create with the travel around the world and exotic locations and actually making a decent living as a make up and hair artist is more difficult now than it ever was so you’re constantly wondering if the job is really worth it then you land that job you do the make up in the hair for the shoot you look at what you’ve created and all the smiles and all the love that is shared and appreciated from your art yes the money means a lot but to see the smiling face of a person that you’ve done make up in here for that maybe not has had one before is so exciting and satisfying. One moment in my career as world artist for Revlon I was in Australia doing my makeovers in front of about 200 people in the store Davy Jones in Sydney actually and I had a young lady come on my stage and she did have some textured skin after doing the makeover she got out of the chair the audience was clapping she looked in the mirror and said this is the most beautiful I’ve ever looked I started crying in front of everybody and then I started crying and then we all started crying but we had a wonderful time and I would have to say one of the most incredible moments in my career besides having my audience with Princess Grace of Monaco . 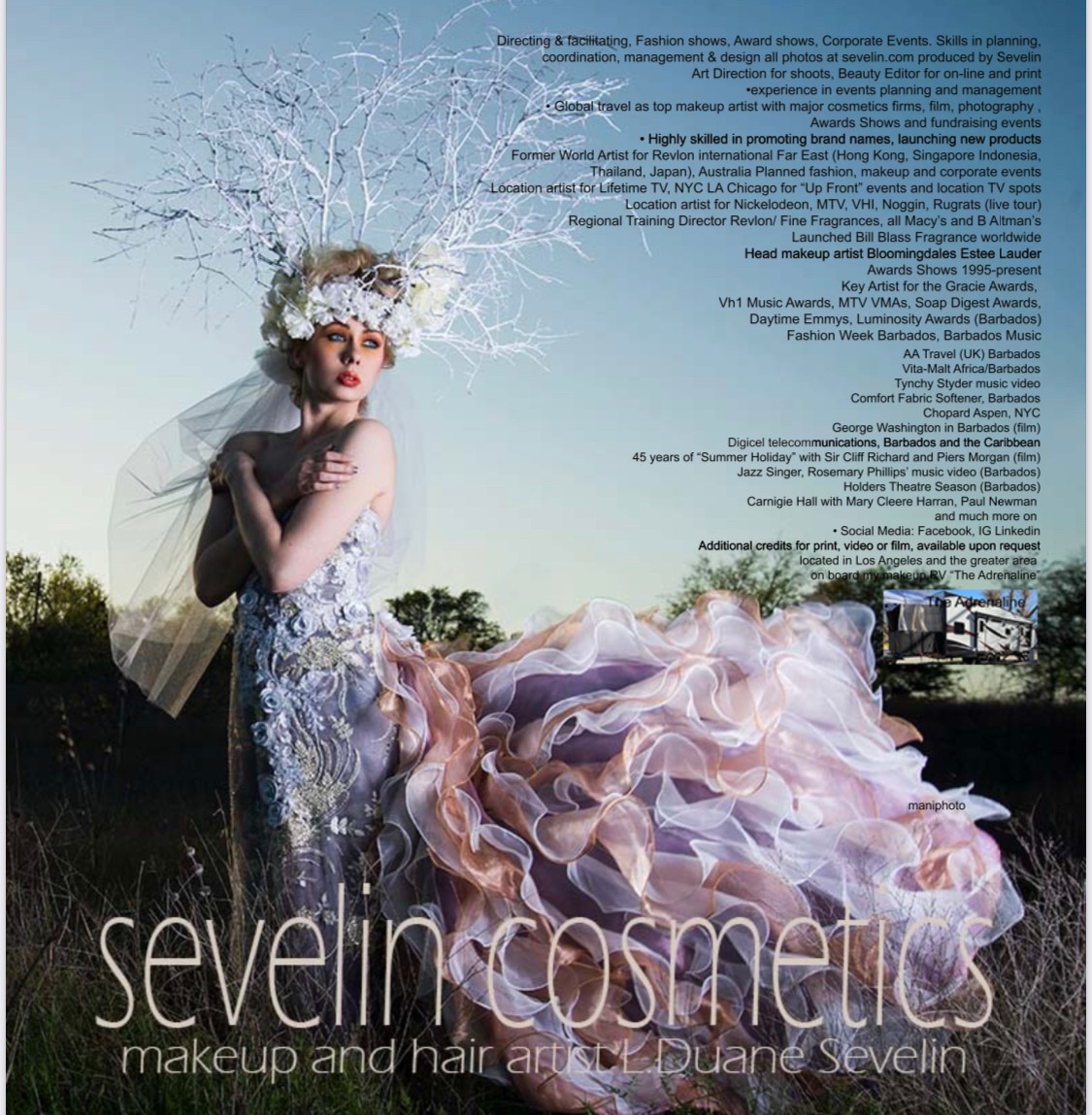 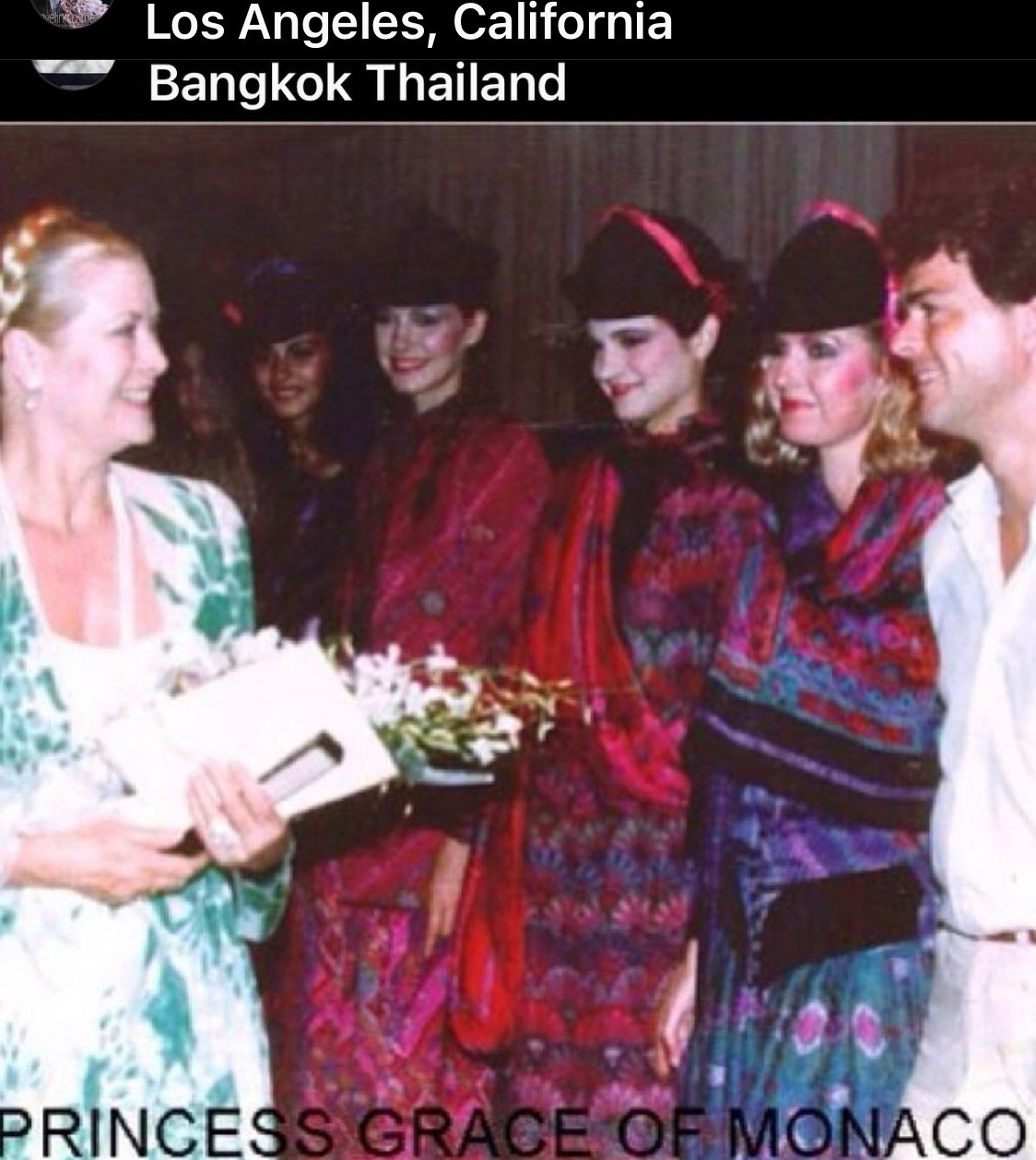 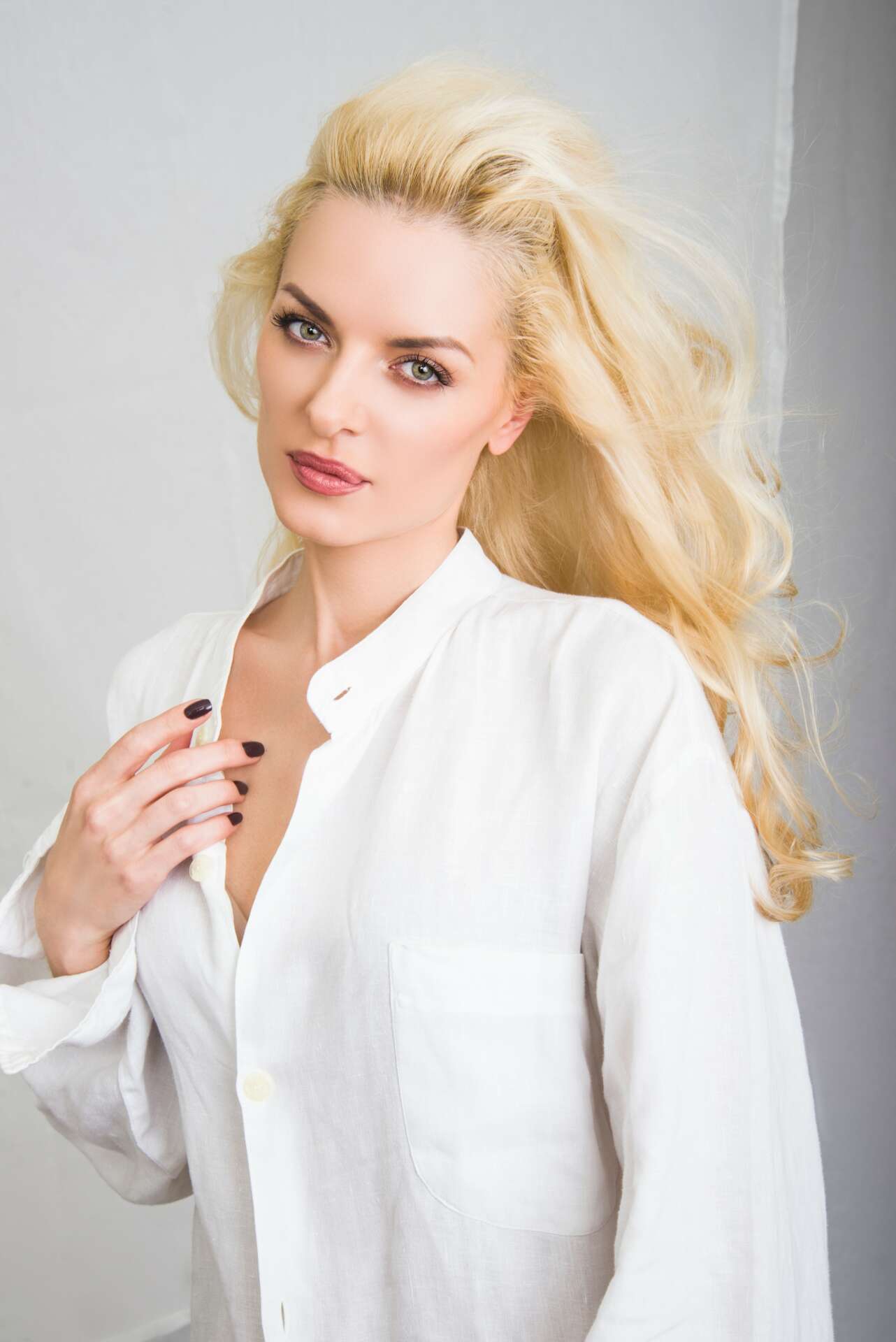 The cell phone living in Barbados until 2015 I did not even know what a cell phone was I barely knew social media but I remember back in the day you’d have to make a real portfolio carry that around with you and show everybody your work, pounding the pavement, every day looking for that special job. In New York City it wasn’t so bad because you could walk,take the subway, take a taxi, take a train, but anywhere else you would have to ship off your portfolio and pay for the delivery expense. . Now with the cell phone social media it makes life as a creative a little bit easier but then you become closed off in your own little world looking for jobs on your phone or on the apps provided. either way it seems like you’re in your own world and it’s gonna be up to you to make your own way sometimes it is very lonely so taking my portfolio in the older days got me out on the street meeting people saying hi getting involved and now everything is sort of digital and non-human and you have to wait for that certain job by text or email. I do reach out all over the world now with social media but there’s really nothing better than home