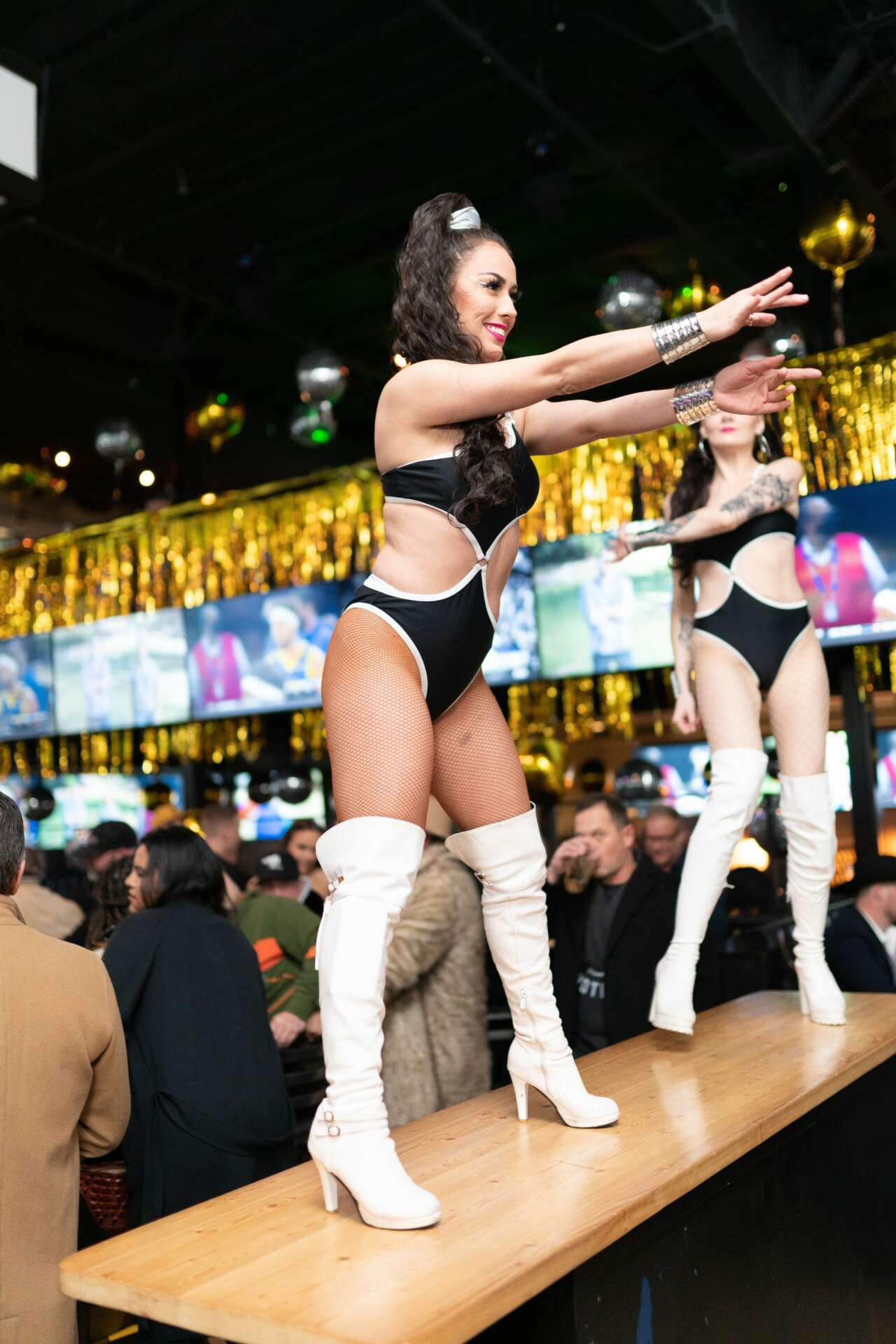 We recently connected with Becca Salazar and have shared our conversation below.

Becca, thanks for joining us, excited to have you contributing your stories and insights. One deeply underappreciated facet of entrepreneurship is the kind of crazy stuff we have to deal with as business owners. Sometimes it’s crazy positive sometimes it’s crazy negative, but crazy experiences unite entrepreneurs regardless of industry. Can you share a crazy story with our readers?

It was a sunny afternoon and I got a call from a longstanding client of mine. Typically when I receive calls it is because of a last minute booking. I answered the call and immediately they started off the conversation apologetically. They needed dancers to be apart of the Dj snoopadellic dog tour in Texas and some of the surrounding states. At the time I was working full time during the week so my mind instantly went into panic mode. The first show of the tour was that following Sunday afternoon followed by a show Monday in Waco and then Thursday in Wichita. The next day I had work and I immediately asked my boss if there was any way I could work a half day Wednesday and then remotely on Thursday to dance at the show. Thankfully she was a big Snoop Dogg fan and was super excited that I got the opportunity and just made me promise to get a picture with Snoop. At the first show which was in Dallas we were booked for about two hours. Halfway through the show one of the production managers pulled me to the side and said they needed two dancers for that same night to drive up to Oklahoma to perform at a weed festival at one of the weed farms out there but we would have to drive out immediately after we had finished the current show. I told the other two dancers that were performing with me and one of them thankfully was able to make it to the last minute show. We were exhausted after dancing outside in the 90 degree weather but with the adrenaline from performing in front of thousands of people we were excited to be given the opportunity. It was about a two hour drive and we pulled up to line of cars going into the dirt road area of a local plot of farm land we had no idea what to expect but when we parked we realized how big this event was. We were directed to a trailer and once we got out of the car we realized this was a whole music festival and we were going to be performing for several thousand people. Throughout the duration of his dj set people were throwing bags of weed, edibles, pre rolls, everything you could think of up on the stage, it was wild to see. After the show we had to drive back and didn’t make it back to Dallas until 4 in the morning. I was able to get a three hour nap before needing to wake up for work and also dreaded the fact that I had to drive out to Waco that following evening. The next days were filled with pure exhaustion and adrenaline trying to scramble and make sure adequate dancers were booked and coordination costuming. the Waco show had a couple thousand people attending and the Wichita show was the biggest one yet. It took us about 6 hours to drive up there and upon arrival to the hotel found out it was a sold out show. Over 10 thousand people were going to be attending. The experience of being in front of that many people is something that is a once in a lifetime moment. That whole week was a complete whirlwind filled with sleep deprivation, adrenaline, and exhaustion but it made me so thankful to be able to be a part of such an amazing industry. 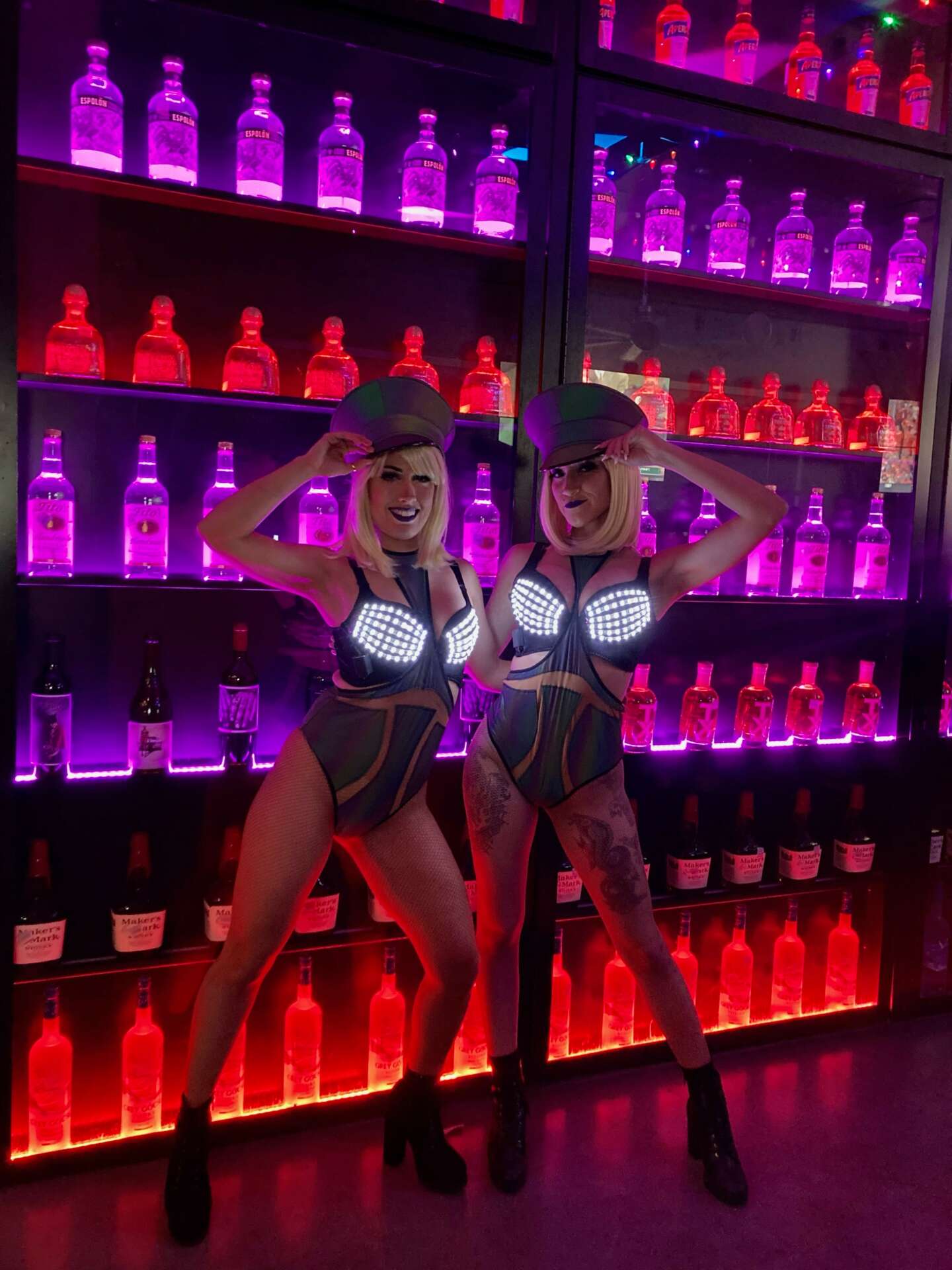 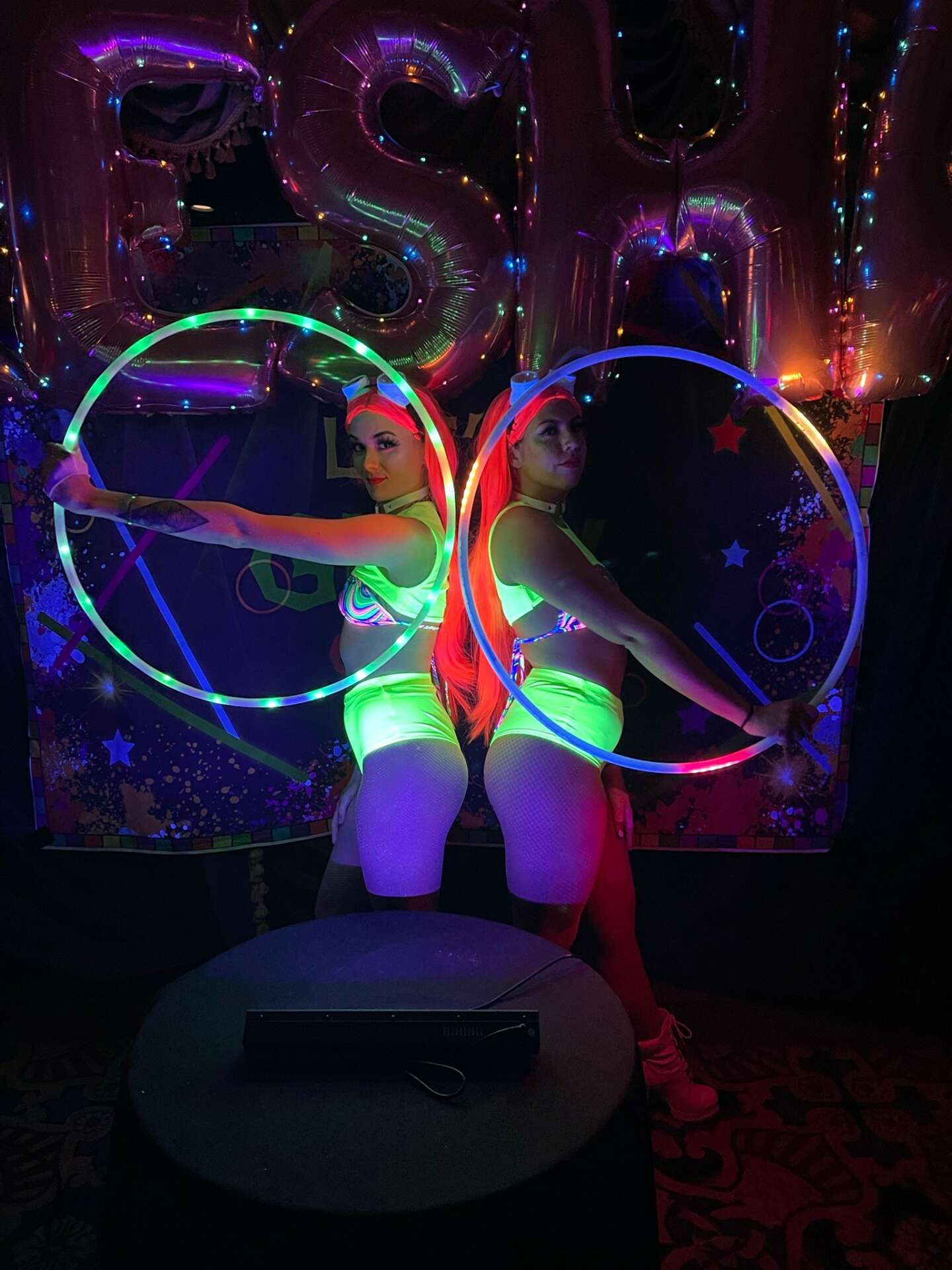 I grew up in Richardson TX, I started off being a gogo dancer when I was 18. I had always been fascinated by the performers at music festivals such as EDC and in night clubs so at about 16 I was determined to get into the industry as dancer. Over the next several years I networked and was able to work in dozens of different nightclubs in the DFW area. During the covid lockdown I slowly realized the need for having a formally organized group of gogo dancers in the Dallas nightlife, there were a handful of entertainment companies in the DFW but nothing that carried out the vision that I had. One day I reached out to a club that was opening and had inquired about multiple different talents such as gogo dancers, fire dancers, and aerialists. This inspired me to get a group of not only gogo dancers but all sorts of specialty acts as well. I had also came into contact with a performer from Houston, Cheyenne, who had reached out to me and wanted to find bookings and we immediately clicked and formed a business relationship since she had over 8 years experience working with and managing a professional group of performers as well as designing costumes. I had no experience with any of that but I did have a lot of networking and potential leads for clients so with both of are areas of knowledge it was the perfect match.

As the months have gone by we’ve developed systems for running the business which has been immensely helpful. But along with running the entertainment company, I have also been going to school full time and found out I was pregnant in mid March. So juggling a school schedule of monday-friday 8am-6pm along with being pregnant and all the curve balls of running Infinite Entertainment it has been a huge undertaking but with the help of my team and family it has been doable. 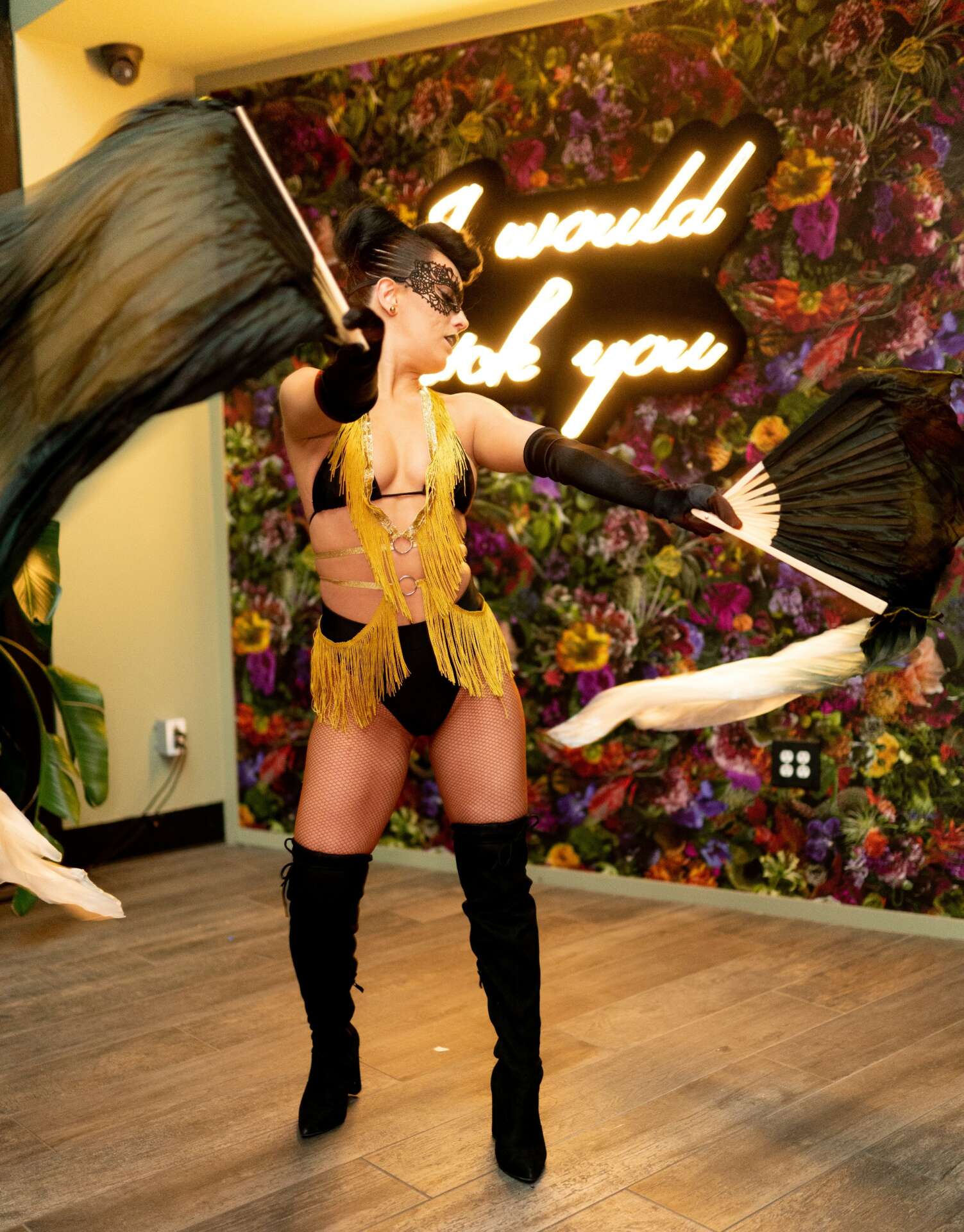 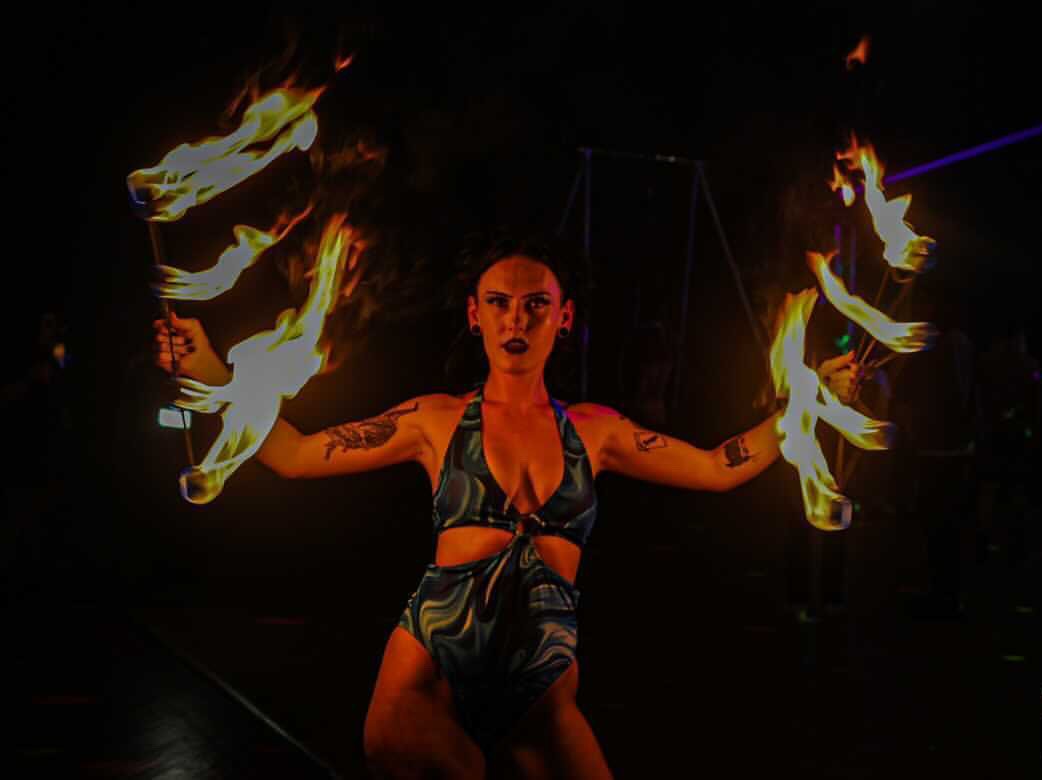 We had been following each other on social media and then one day while I was at work she dm’d me on instagram and asked if I knew of any gigs that needed gogo dancers.