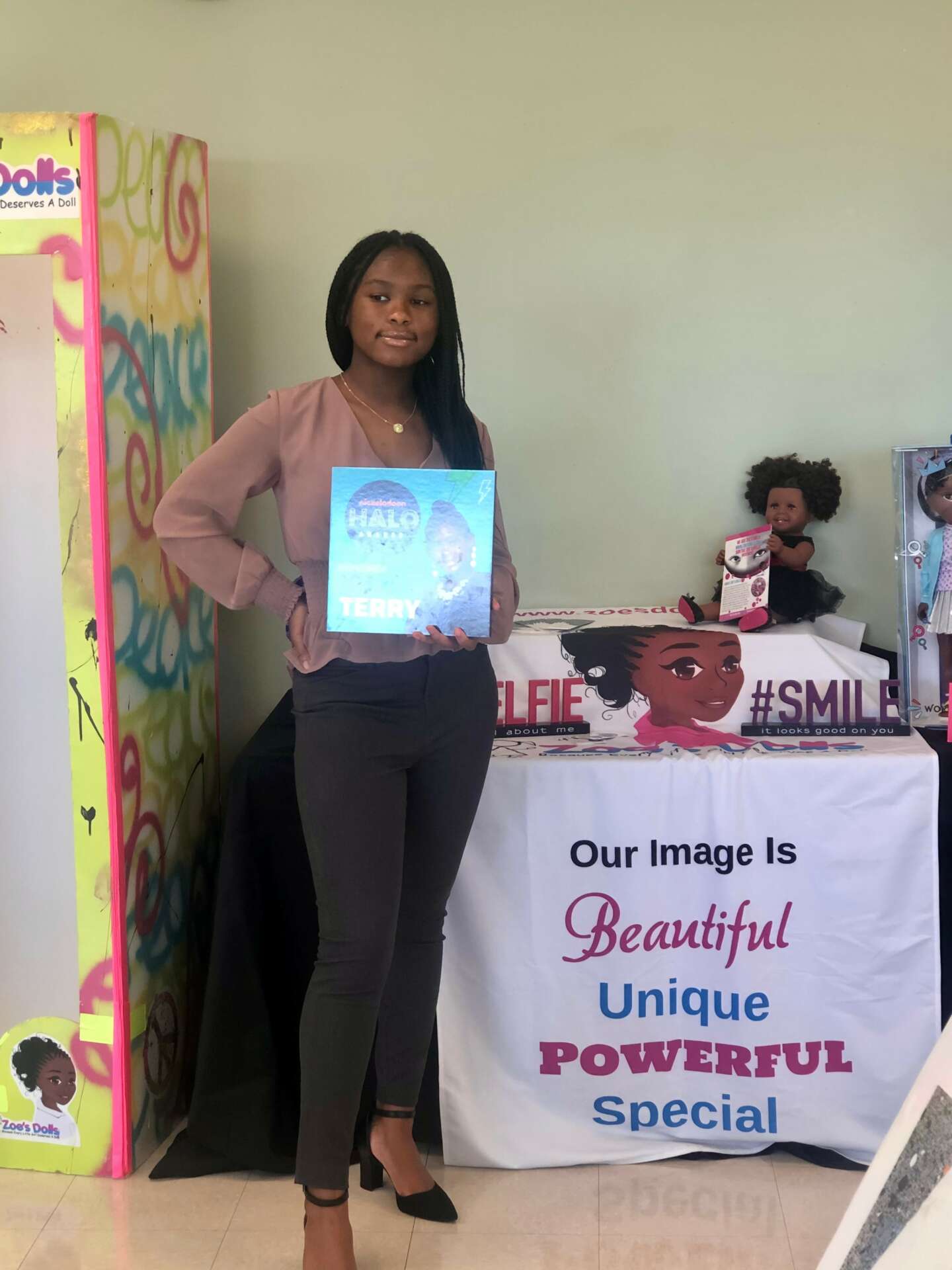 We recently connected with Zoe Terry and have shared our conversation below.

Zoe, thanks for taking the time to share your stories with us today What did your parents do right and how has that impacted you in your life and career?

I feel like I am very lucky and blessed. I am being raised by two strong Black women and a village of strong women. I am being raised by my mother and my Godmother. They are both so different and both of them equally offer something special to my life that has really given me the fortitude to be successful and zealous at just 15 years old.

Everyone who knows my story know that I started Zoe’s Dolls because I was bullied at my school when I was 5 years old. I was bullied because of the color of my skin and the texture of my hair. Basically, I was bullied for basically being the beautiful, black little girl I am. Everyone knows how I turned that negative into a positive by starting Zoe’s Dolls, to give out black dolls to Black girls to let them know that they are beautiful and special just the way they are. I don’t think people understand the significance of what really happened. That’s where my mom and Godmother come in.

My mom could have easily taken me out of the school. She did not. She actually went against what other people were telling her to do. My mom made me stand in my truth. She sat me down and she said, “where ever you go, you are always going to be a black girl. There is always going to be someone that judges you for that. It’s just the nature of the world we live in. What’s important in this whole situation is how you respond to this Zoe. You have to know that you are more than enough. You have to know that you are beautiful and you are special. The only opinion that matters in that is your opinion of yourself. Stand in your truth and love it!”

She did not take me out. She made me go back to that school and stand in my truth. She made me show a sea of mostly faces that did not look like mine that this Black girl was beautiful. Most importantly she encouraged me to be the change that I wanted to be. She said if you don’t like it— change it! Her and my Godmother just went into overload, they started doing daily affirmations with me. They started surrounding me with books that featured positive images of Black girls. They took me to plays and events that featured positive Black girl characters. They just started lifting me up to love who I was and be unapologetic about it. 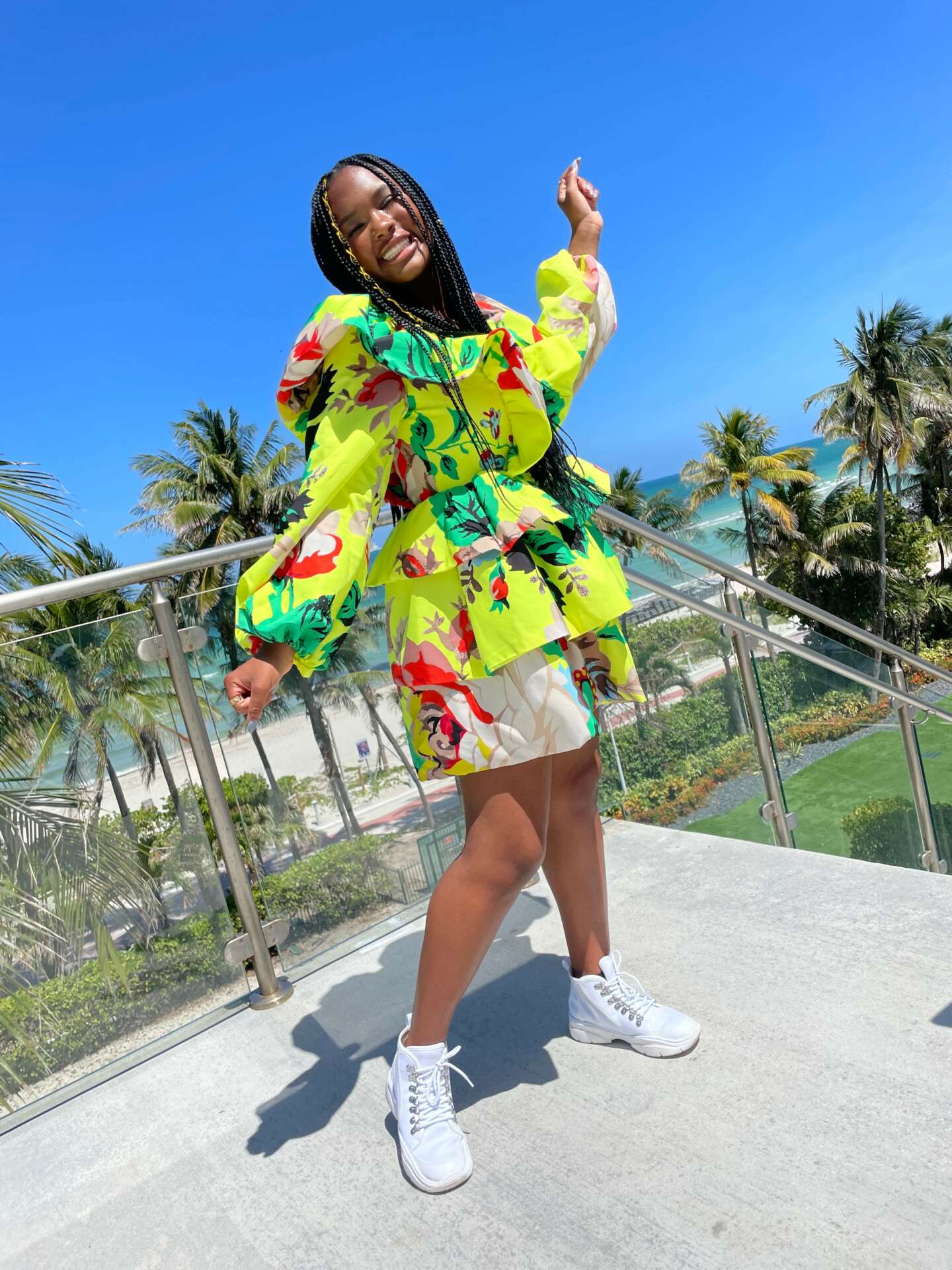 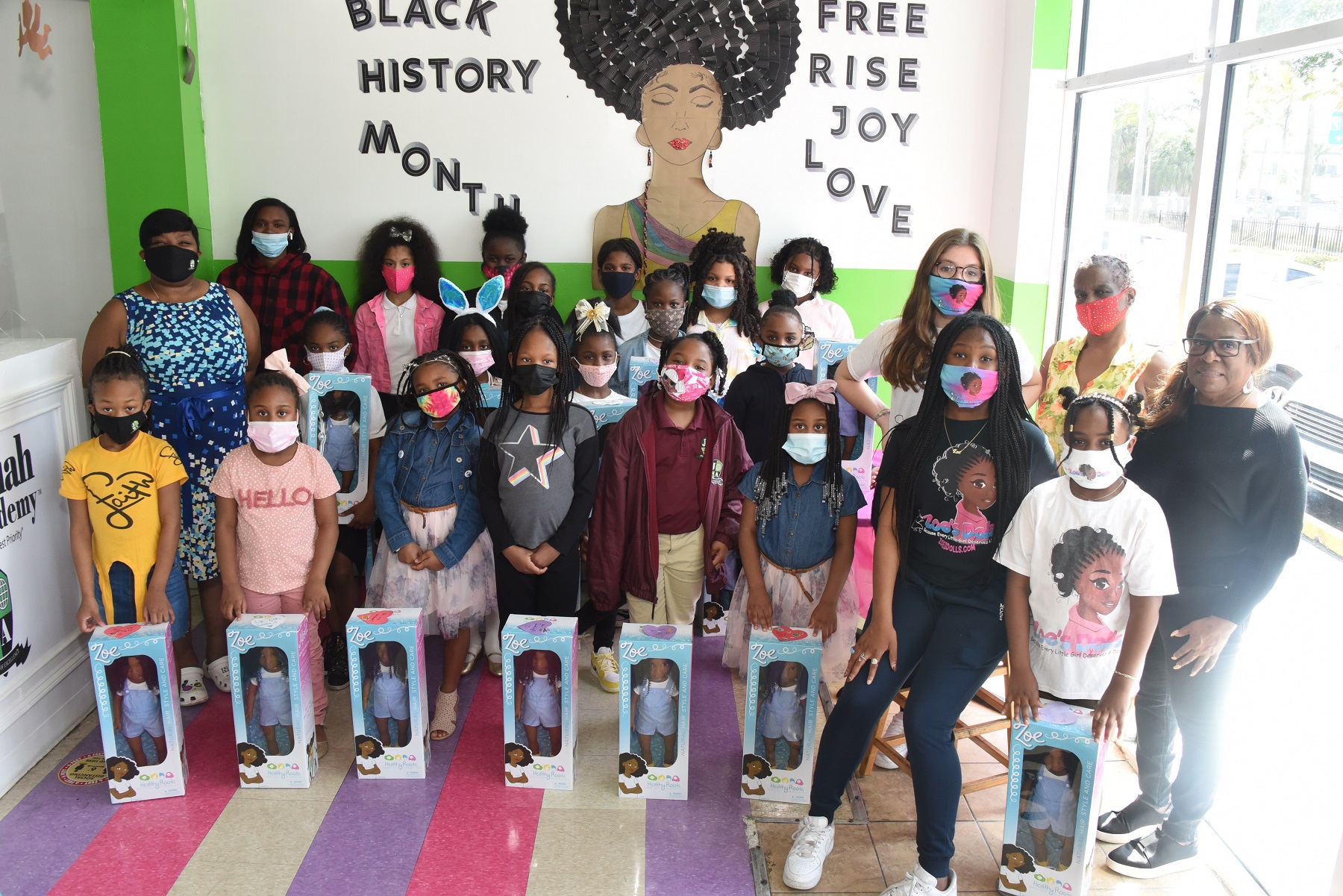 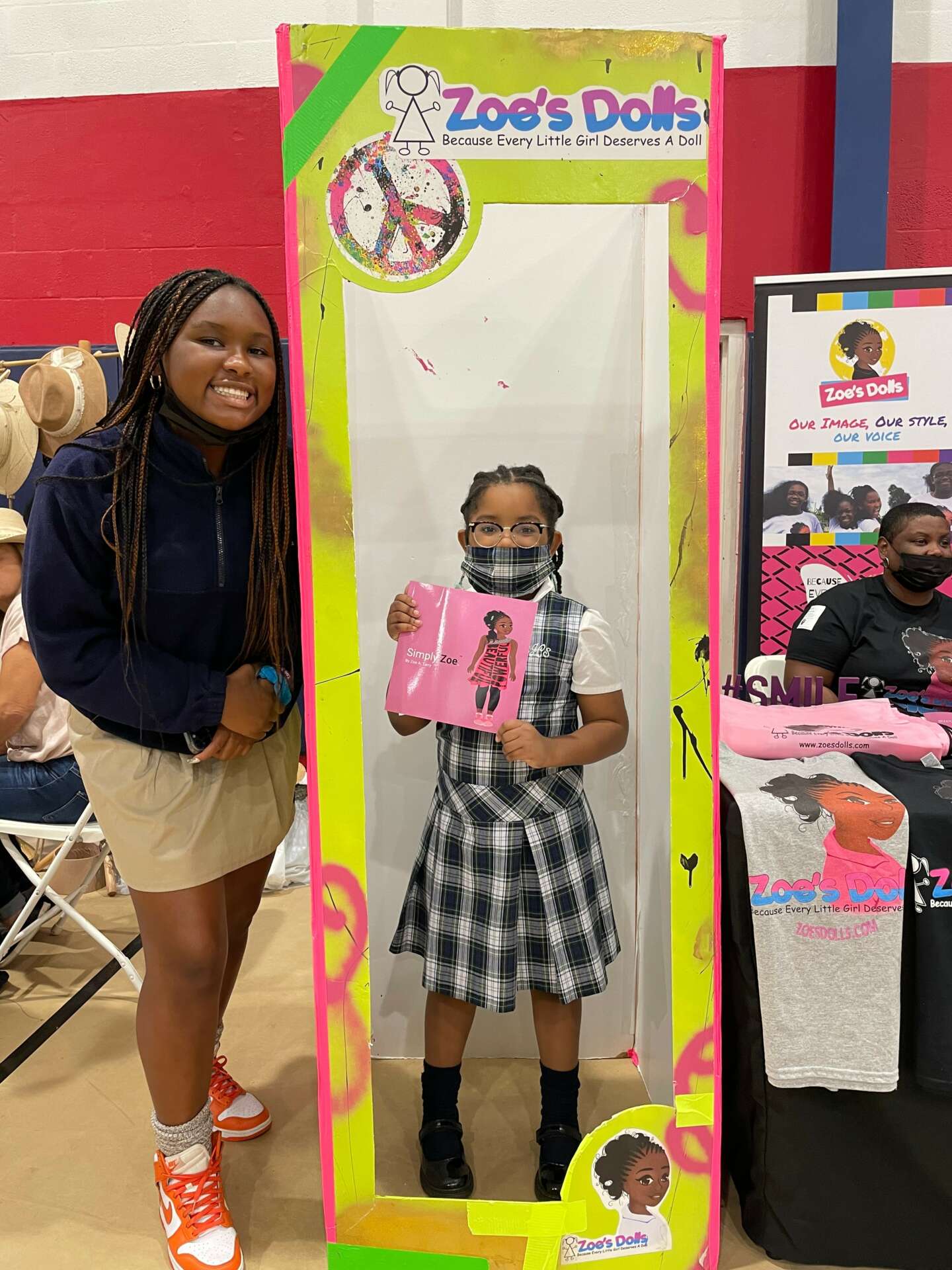 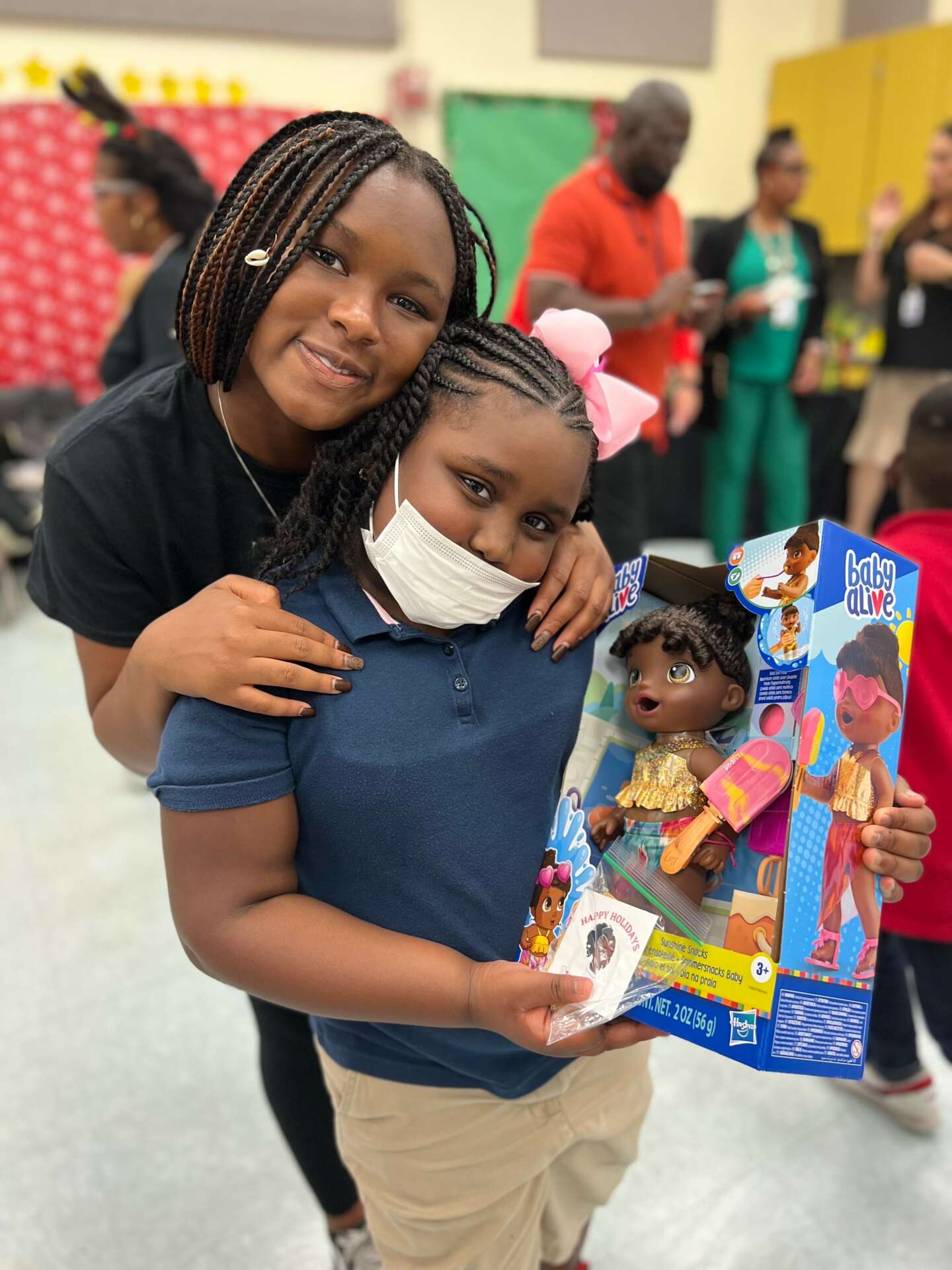 I am Zoe Terry. I am 15 years old, I am the CEO of Zoe’s Dolls, a not-for-profit organization founded in Miami, Florida. I started Zoe’s Dolls when I was just 5 years old.

To understand Zoe’s Dolls, you kinda have to have a little background history on me. When I was 2, I suffered a stroke. It left me with fine and gross motor skill difficulties, along with some speech impairment, I did not let that stop me. After hard work and intensive physical, occupational and speech therapy, I overcame most of her physical limitations.

This was the beginning of Zoe’s Dolls.

Since its inception, I have given out approximately 50,000 dolls. I have impacted the lives of over 30,000 girls in South Florida, Texas, Mississippi, Georgia, New York, Detroit, Haiti, Jamaica, The Netherlands, Cuba, Trinidad and Africa. I have chapters of Zoe’s Dolls in Mississippi, Georgia and Texas.

I didn’t just stop at dolls. My organization has developed and runs programs aimed at empowering little girls and young ladies, to let each one know that her image is beautiful. Listed below are the programs of my company.

Loving the Skin I’m In Creative Expressions Contest now in its seventh year is an annual competition open nationwide to girls 6-18 years old. The girls can submit a written or video submission on why they love the skin they are in. Winning entries are awarded cash prizes for first, second and third place and honored at a culminating formal banquet.

Love Letters to Black Girls is a program where Zoe’s Dolls solicits the community to write inspiring, empowering and inspirational letters to Black girls. These letters are then given out to girls all

Zoe’s Dolls Girl Ambassadors program allows other little girls to join in on the Zoe’s Dolls mission. Each year the program accepts 15 girls that work with Zoe throughout the year giving back through community projects, the doll giveaway and volunteering to read to little kids.

Girlpreneur Program: Girlpreneur is a program that Zoe’s Dolls debuted in January 2016. The program accepts 15 girls between the ages of 8-13 that have an interest in owning their own business. Girlpreneur works with these girls for six months, using a kid based business curriculum designed to give these girls the foundation to starting their own business. During the program girls learn how to formulate their business idea, develop a business plan, incorporate their business and design marketing plans. The girls are also paired with business owners, whom serve as mentors. At the end of the program, each girl will have incorporated and started their business. Each girl also receives funds towards the development of her business.

The Girl Fit Experience. After a reading a report with my mother about The State of Obesity, in a special report called Racial and Ethnic Disparities in Obesity, where it showed that African American girls were more obese than any other ethnic group, I decided I had to do something. The Girl Fit Experience is a fun, interactive day of fitness designed with girls in mind. I had my first Girl Fit Experience, July 2016 and more than 80 girls came out to get fit. The program has now expanded to a full out afterschool fitness program.

The Living Doll Experience (LDE) now in its seventh year is the premiere, kick-off event to Doll Season. LDE features 15 girls that are transformed into “living dolls”. They are cased in life sized doll boxes. These 15 “live” dolls represent all the beauty, grace and style that the little Black girl embodies. These “live” dolls represent the multitude of ethnicities, lifestyles and cultures of the African Diaspora. Once the show starts, an eclectic burst of fashion, music and dance will collide to bring to life the image of the powerful, beautiful and undeniable Black girl. LDE is free and open to the community. The event features live music, free food, entertainment, vendors offering free items and social service agencies.

I recently started a Zoe’s Dolls Club at my school Miami Country Day School. Zoe’s Dolls has taken me so many places! In April I will be going to India to speak about Zoe’s Dolls and give out dolls in India. I was just featured in the American Girl Book Body Image.

My philanthropic work has impacted the lives of many. I have invested over 20,000 hours of my time since starting Zoe’s Dolls. I volunteer my time to speak at different events such as OIC of South Florida Youth Summit, Urgent Inc.’s Youth Economic Development Conference, City of Miami Gardens Money Matters Conference, Annual Foster Care of Dade County Banquet, churches, schools and community events. I’ve spoken at The United Nations and I gave my first TED Talk at 9 years old.

I have been recognized and honored for my philanthropic efforts in many arenas. I graced the cover of the June 2018 Teen Boss Magazine. I was featured in the NAACP’s. quarterly magazine, TheCrisis. I appeared on Good Morning America in February 2018 during a special segment with Robin Roberts called Black Girl Magic. I was named one of Glamour Magazine’s 17 Young Women Who Created Real Change In 2017. I was featured in Bloomberg Businessweek in their Game Changer column. I was a 2017 Nickelodeon HALO (Helping And Leading Others) Award Winner, the youngest winner ever. I was one of 10 youth named as the Hasbro Community Action Hero in 2017 and was honored in New York City during the 2017 Annual Toy Show. I was given the first-ever Miami-Dade Outstanding Youth in Philanthropy Award by the Association of Fundraising Professionals. I was named the MLK 2017 Trailblazer. I was honored by the Miami Alumnae Chapter of Delta Sigma Theta Sorority, Inc. In June 2016, I was named one of The City of Miami Gardens’ Unsung Heroes by Councilman Erhabor Ighodaro and honored by the City of North Miami as Outstanding Youth in February 2016. I was named the Kohl’s Cares Regional Winner in 2015. I was also featured in the book “Why” as a Social Entrepreneur, produced by Miami Country Day School, I was a keynote speaker at the Points of Light Service Unites National Conference and a keynote speaker at the United Nations in NY during the Nexus Global Summit.

I am the author of the book Simply Zoe and I have a podcast, called, P.O.V. with Zoe. I’m living my best life! I have great friends! I have a great family and I love what I do!

I think my whole journey illustrates my resilience. Me overcoming bullying and still staying at the same school, I’m still there. Me overcoming my stroke. They told my mom that because of my stroke I might not be able to do other things that kids my age do. One of the things that the doctors mention was swimming. They said I might not be able to do things like swimming or riding a bike. Well, I can ride a bike. I’ve been on my school’s swimming team for five years and I won the coach’s award my first year on the swim team and I couldn’t even swim when I joined.

They said I would always have like a lisp or slurred speech. I given a TED Talk and spoke at the United Nations! I have a something that I like to say. “Sometimes I fail, but I put commas and keep going.” 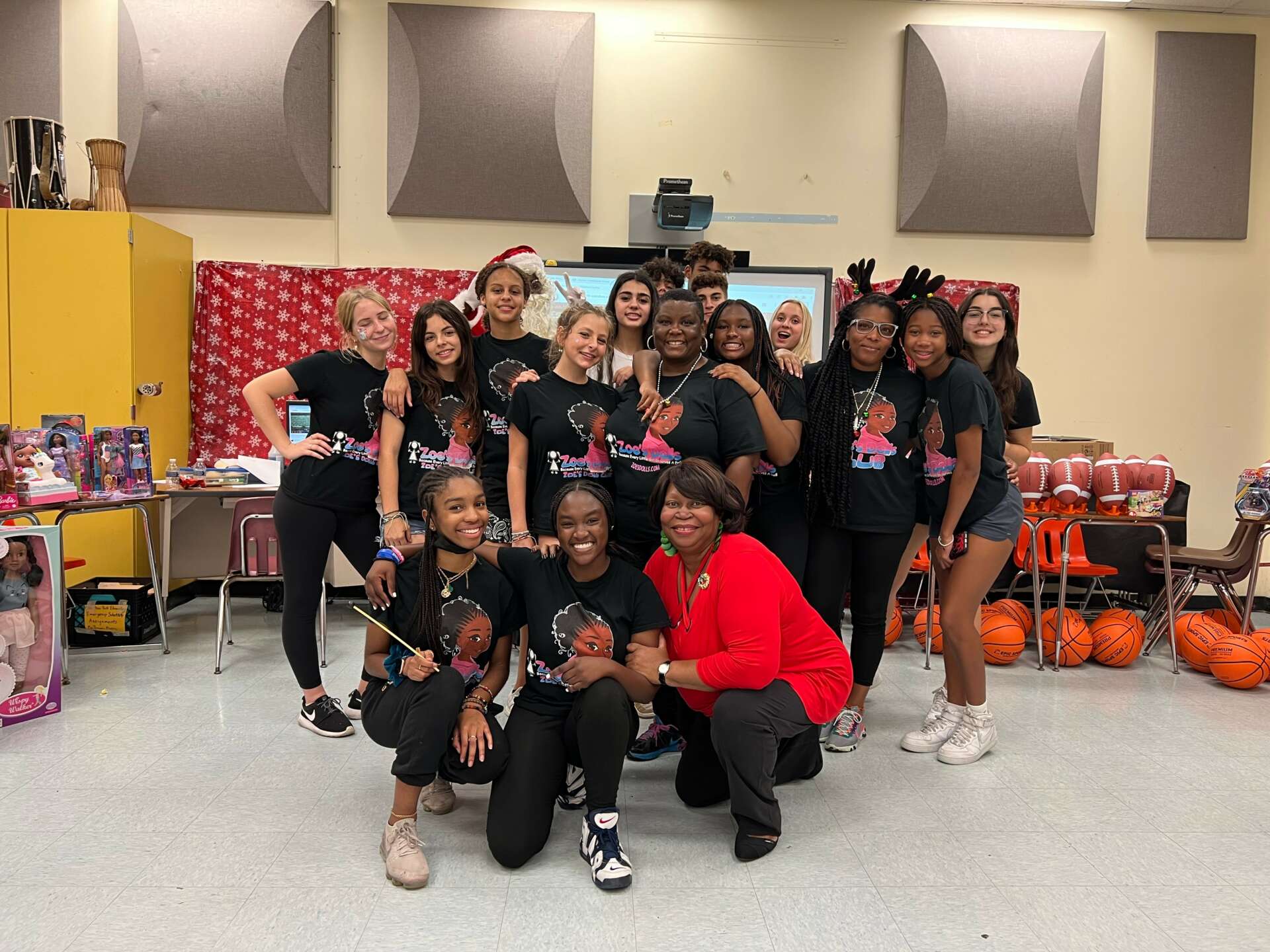 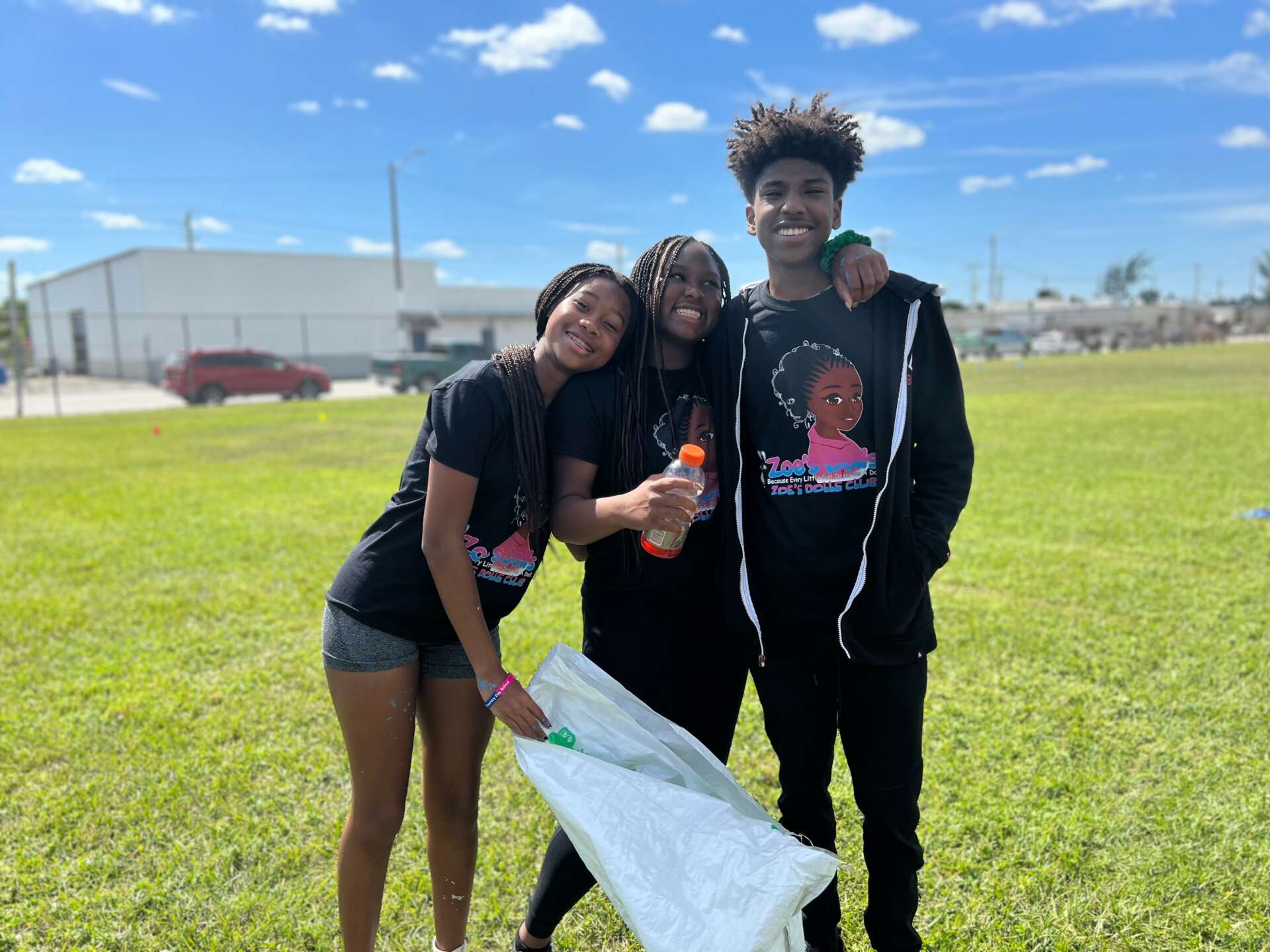 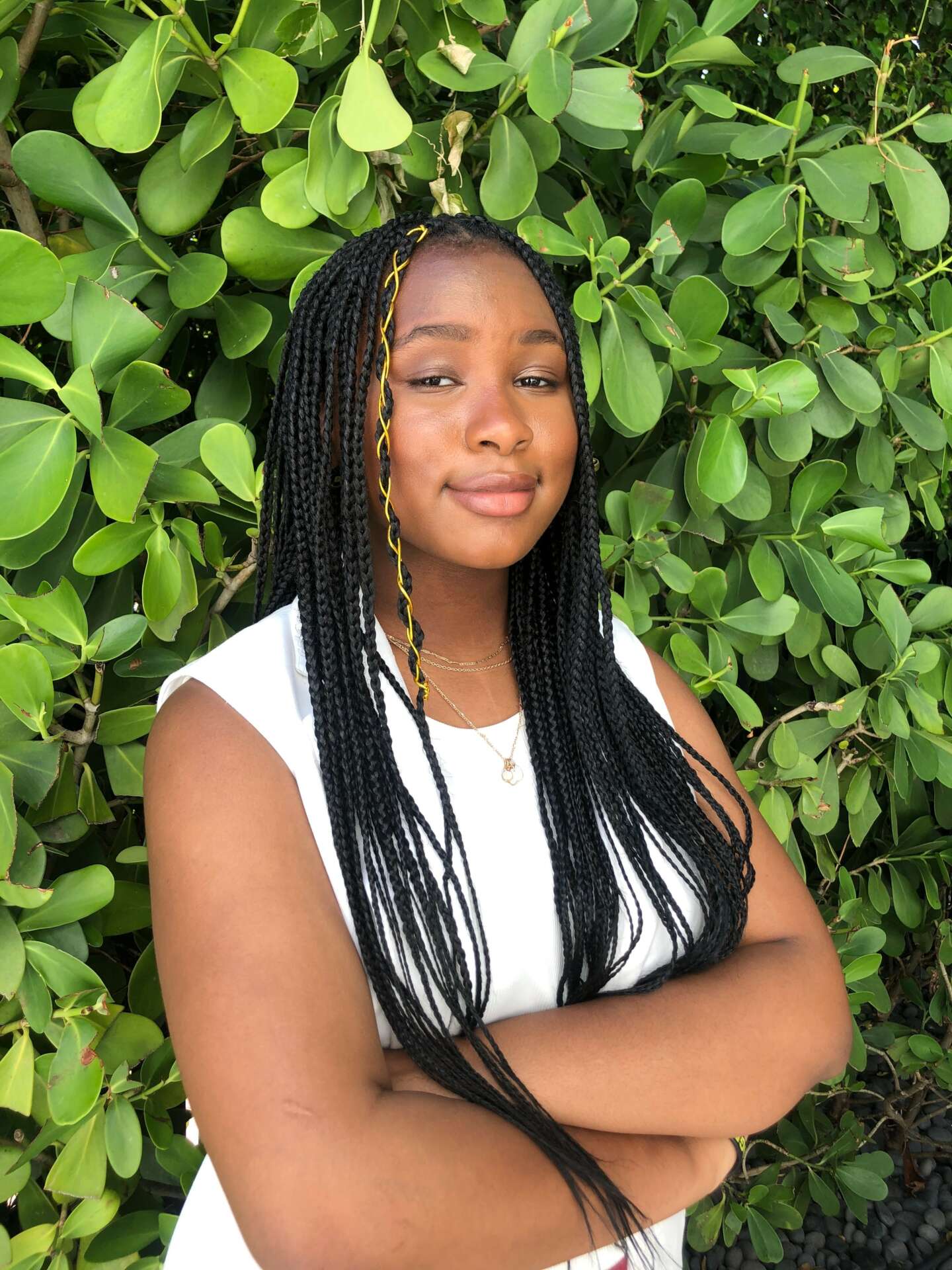 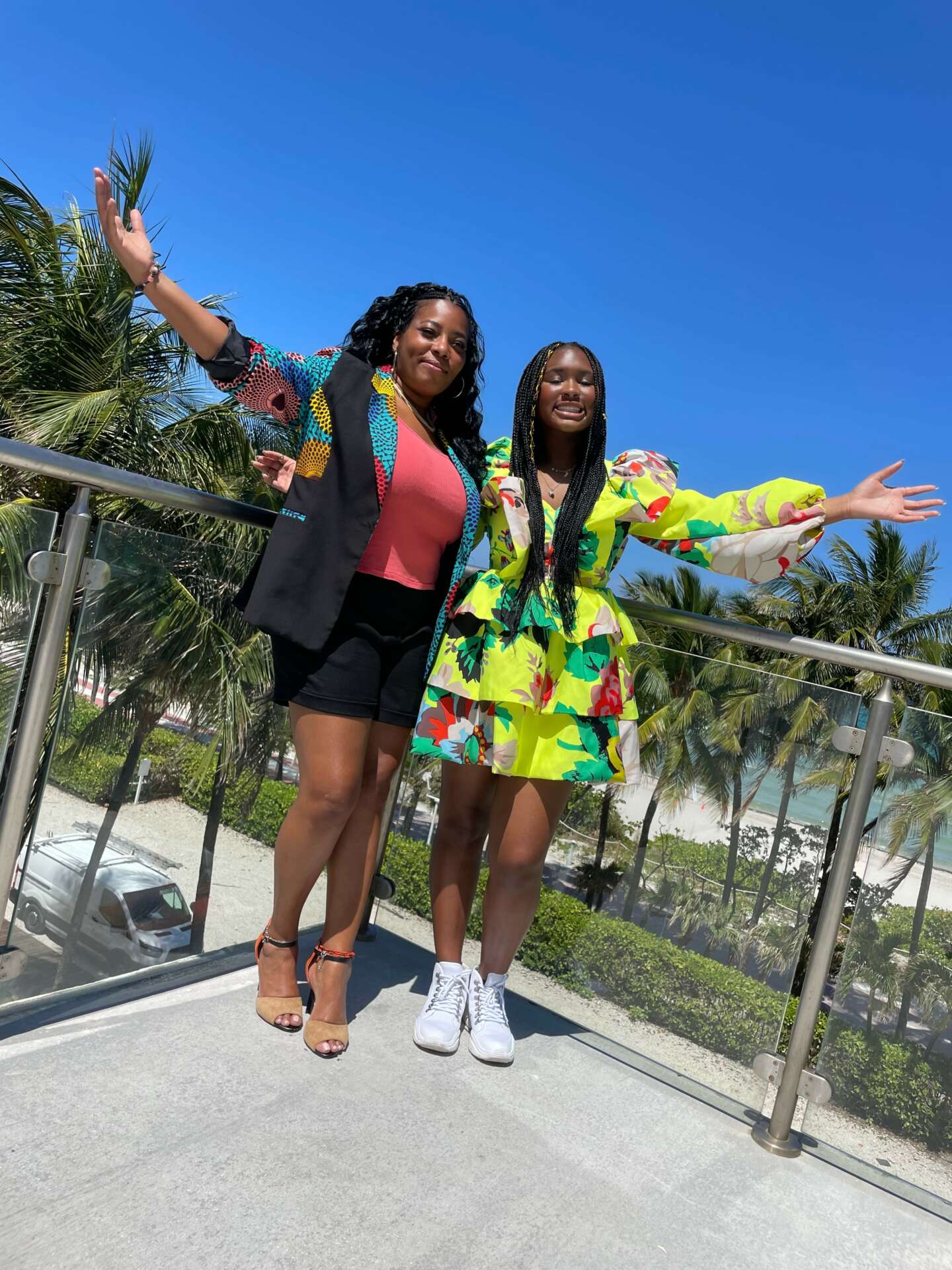 I would say a lesson I had to unlearn was that it doesn’t matter how young you are or how small you are. You have the power to still make a difference and an impact. You can do it in a major way!