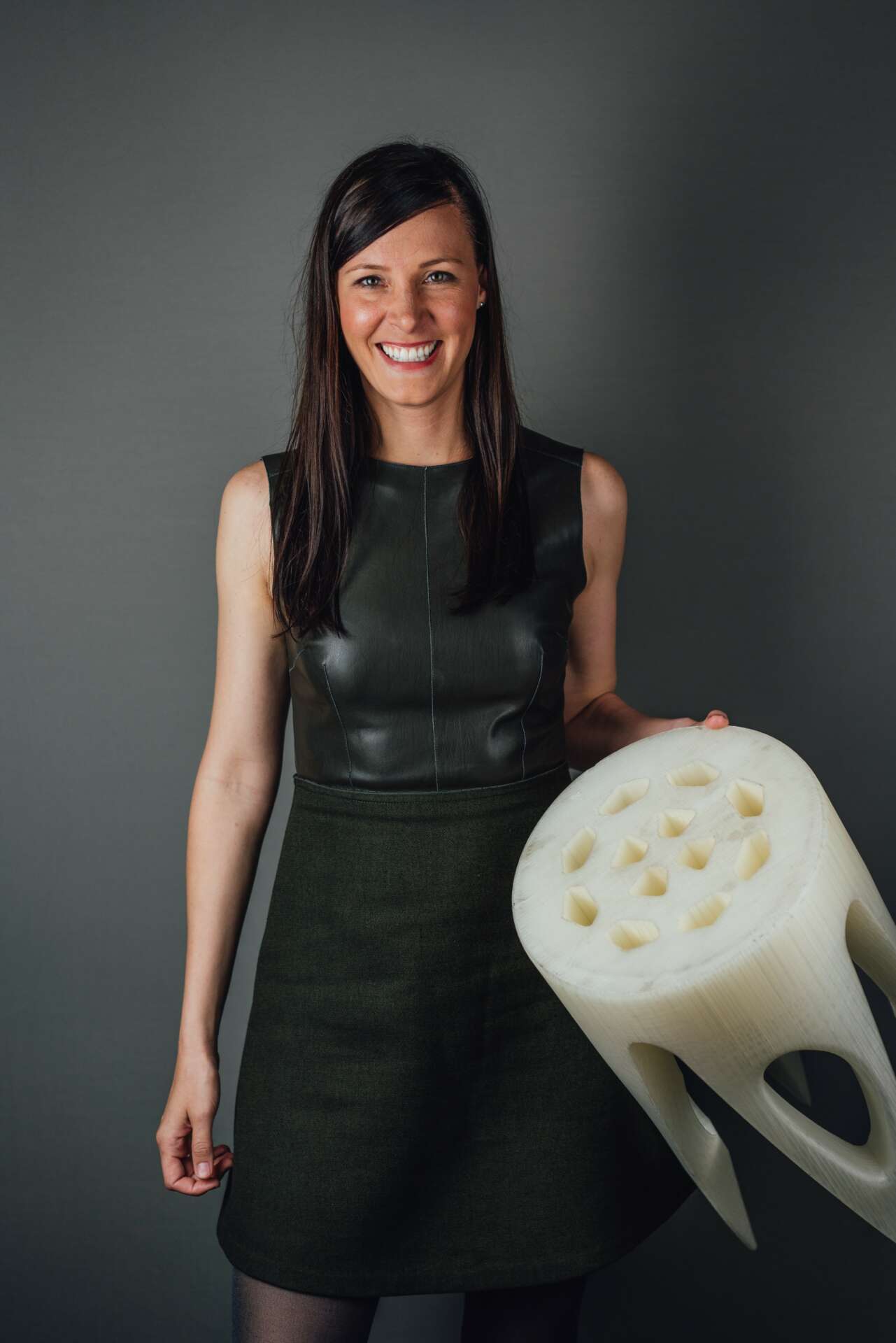 We recently connected with Samantha Snabes and have shared our conversation below.

Alright, Samantha thanks for taking the time to share your stories and insights with us today. Alright, so we’d love to hear about how you got your first client or customer. What’s the story?

After submitting to the Independence Challenge with Instructables, we heard about Start-Up Chile, an initiative that identifies and supports customer-validated and scalable companies that will leave a lasting impact on the Latin American ecosystem. The program provides equity-free startup funds, as well as access to investors, training and mentors. It seemed like the perfect incubator to submit our idea. The next thing we knew, we received a letter stating we were being awarded $40,000 to start a company, and I was moving to Santiago. Start-Up Chile made it seem like it was really a business. It became very real to me and Matthew.
Both of us quit their jobs to work full time on the company we called re:3D in 2013, and I moved to Chile in January for seven months. We didn’t have any other funding or a prototype. I showed up in Santiago with just an idea in my head.
Back in Texas, another hotbed for innovation was approaching in March: the South By Southwest festival in Austin. I knew we could have a chance at a tremendous startup impact if we could get a prototype to SXSW in time. After hearing that Start-up Chile would have a large booth in the SXSW Exhibit hall, we worked out a deal to show off the prototype if Matthew could make it in time, and I could work out the details to launch it on Kickstarter from the booth live. We were dubious it could be done in time, just eight weeks away.
At his home in Houston, Fiedler created the first version of the Gigabot, which would provide industrial-strength, large-format 3-D printing at an affordable price point. There was just one problem: The prototype was too big to fit through his living room door. So, he had to disassemble it, transport it to Austin and reassemble it live on the carpet of the SXSW exhibit hall. But it was done and set up at the booth in time for the opening of the festival. Simultaneously, I was in Santiago putting together a Kickstarter campaign aimed to launch at the same time the Gigabot made its world debut in Austin.It was like the perfect storm. We timed it so that the campaign started right when the booth opened at South By Southwest.

It was a hit. The Kickstarter campaign was funded to its $40,000 goal within 27 hours, quickly surpassing that goal and eventually raising more than a quarter of a million dollars. A story in TechCrunch helped get the word out about the new technology, and suddenly, re:3D was a major player, with orders coming in from throughout the world.
We went really quickly from idea to product, selling globally. We were suddenly in 20+ countries, selling to strangers.

In August 2017 we launched a presence in Puerto Rico as part of the Parallel 18 accelerator. Unbeknownst to us, we moved to Puerto Rico two months before three Hurricanes would impact our team directly (and while I was deployed for a month to Korea)! In addition to Irma and Maria, Hurricane Harvey hit our factory first in Houston. So the Houston team experienced a hurricane firsthand, and then our Puerto Rican team and office were hit by Irma and Maria. As I was on the island, I was activated to support the response while our company was in crisis.
Despite the chaos, we were able to work with our customers and community to communicate delays and tried to be transparent in our needs for our team & company.
In the process, we were committed to trying to support our friends impacted by the devastation in TX and PR. We offered 3D printing for free for a period of time to support response and recovery for locals, and we learned a lot in that process. You can view some stories from the experience at https://re3d.org/stories.
What’s interesting is we always had a vision to 3D print from plastic waste, and with no recycling for the all the waste water bottles in Puerto Rico, we’re committed to piloting 3D printing from plastic bottle waste with the Puerto Rican Science and Research Trust. And we’re also talking to a lot of manufacturing companies on the island, because we’re learning that even more than water bottles, a lot of waste comes from big brands manufacturing goods, so we’re looking for ways to use that waste from the factories either for internal needs or to create new jobs for others to use it.

Matthew & I met when working at Johnson in 2009, but they shared another interest. We both were interested in international development work and had volunteered with the Johnson Space Center Chapter of nonprofit Engineers Without Borders. We, along with other friends at Johnson and in their volunteer community, began musing about the similar challenges faced by astronauts out of reach of a supply chain and communities in the developing world. The team wanted to make it possible for groups in developing countries, whether aid agencies, small businesses, or schools, to buy and use large-scale 3D printers—the company calls the printers human scale alluding to the idea that they can print full-size, functional objects as opposed to miniaturized prototypes.
The idea was to enable someone to own their own personal factory and ultimately control their supply chain so they could print solutions locally, which we thought would have been an asset for some of our peers when we volunteered at Engineers Without Borders
But we couldn’t find an affordable, industrial large-scale 3D printer to incorporate into their business model. Big printers came with big price tags, around $100,000, and they weren’t built to be portable.
So Matthew decided we could build our own. He traces his background to mechanical, industrial, biomedical, and biomechanical engineering, says he started building things as a kid and kept right on doing it. At NASA, he used and expanded those skills in the human research program at Johnson, in the neuroscience lab.
“We were primarily interested in mitigating the effects of microgravity for the astronaut crew,” Fiedler says, and to that end, “we not only worked with a lot of software and hardware, but we created devices and machines that would test the astronauts.
“So I would work with programming machines that would simulate motion environments for the astronauts. It translates a lot from the hardware/software side, directly into creating a machine that moves like the 3D printer,” he says.
All that experience, from his childhood tinkering days to the high-tech work he was doing at NASA, paid off. Fiedler went into his garage workshop with a blank piece of paper and some aluminum for the frame, and “from there I figured out how to put everything together to make it strong and simple, and simple to manufacture.”
In parallel, I started polling NGOs, asking what people would make if they had a 3D printer. People wanted to produce prosthetics and tools, larger objects than what small consumer printers could accommodate, and they wanted a printer with a smaller price tag. Originally the team thought they would make a non profit to bring the designs for an open-source, 3D printer to the community. The team applied to several maker & non-profit challenges online, occasionally being named finalists. However it was once accepted into Start-Up Chile that solidified our confidence that we might be better suited to help others as a sustainable social enterprise.

Matthew began working nights and weekends in his garage and in eight weeks produced what would become the Gigabot, a large-format 3D printer the size of a chest of drawers (or as I say, “toilet-sized”). In 2013, we debuted our newly created Gigabot on Kickstarter and at SXSW, where it caught the attention of TechCrunch. It was on TechCrunch literally within an hour or two of going live and we hit our funding goal in 27 hours!