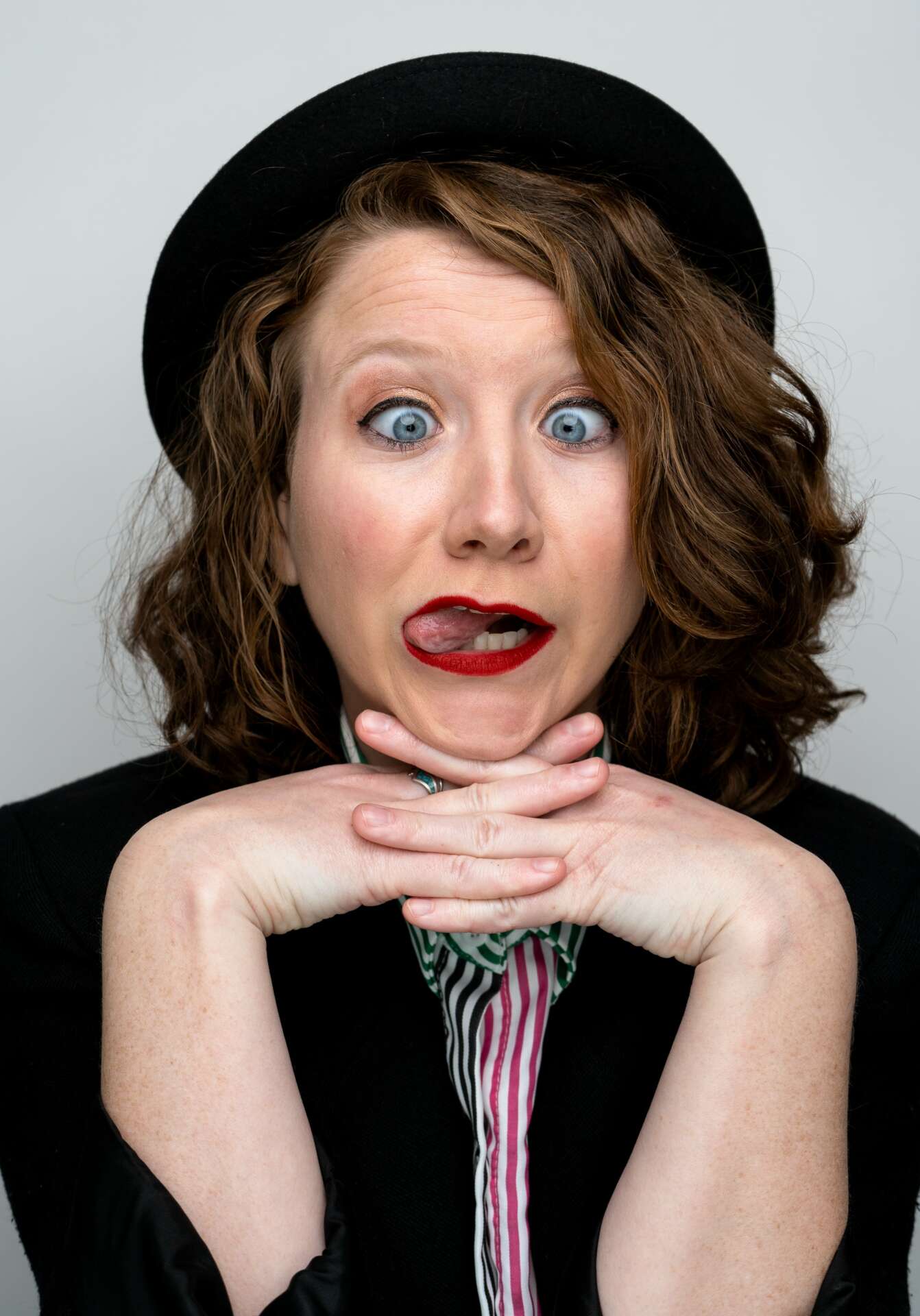 We’re excited to introduce you to the always interesting and insightful Mimi Hayes. We hope you’ll enjoy our conversation with Mimi below.

Alright, Mimi thanks for taking the time to share your stories and insights with us today. It’s always helpful to hear about times when someone’s had to take a risk – how did they think through the decision, why did they take the risk, and what ended up happening. We’d love to hear about a risk you’ve taken.

In 2017 I quit my job as a high school history teacher to move to New York City to become a standup comedian. This sentence alone gave both of my parents a heart attack (figuratively). For context, becoming a teacher almost killed me (literally). 5 days into my first job I had a brain hemorrhage. They say teaching isn’t for the “weak of heart” but they never said anything about brains!

While I survived brain surgery and worked hard to regain my motor skills, I picked up something new in recovery as well: a really dark sense of humor. Nobody else thought it was funny that my head exploded, but I did. So much so that I started doing standup comedy on weekends whenever I wasn’t grading my student’s papers. I started performing at clubs, telling jokes about having a catheter and using a wheelchair as a 20-something.

After 2 years of moonlighting my comedy (and writing a book) while teaching during the day, I felt an incredible pull to do something crazy. I’d leave my classroom of chaos and swap it out for something even more insane: The Big Apple!

I moved with 2 bags, no job, and no credentials whatsoever. Just blind confidence and a set of noise-canceling headphones for the subway.

While there, I published my first book and performed comedy all around New York…and even the world! I debuted a one-woman show at the Edinburgh Fringe Festival and even did a TED talk.

Moving to New York isn’t like you see it in the movies, you see. I had no money, no job security, and every single day was an uphill battle. And for me, being there with an invisible disability made it even more challenging. And I thought my classroom was loud! Subway screeches and sirens and hustle and bustle and people everywhere. New York was the hardest thing I’d ever done before…well, minus relearning how to walk! And I did it all with my amazing and resilient brain.

The night before I uprooted my life and moved to New York City I cried. Like that really guttural and ugly kind of cry. I was so incredibly scared. Of the unknown. Of failure. Of blowing through all my money and ending up back in my parent’s basement.

I did end up back in my parent’s basement 3 years later by the way…but only because of a global pandemic! And yet in that short period of time, I made quite the splash. I changed my whole life while I was there and I don’t have a single regret.

I recently uprooted my life again. Not back to NYC but this time to LA!

While I was busy hustling in New York I adapted my first book into a TV pilot. And I figured maybe it’s time to tackle Hollywood!

Who knows? Maybe you’ll see me on the big screen next. 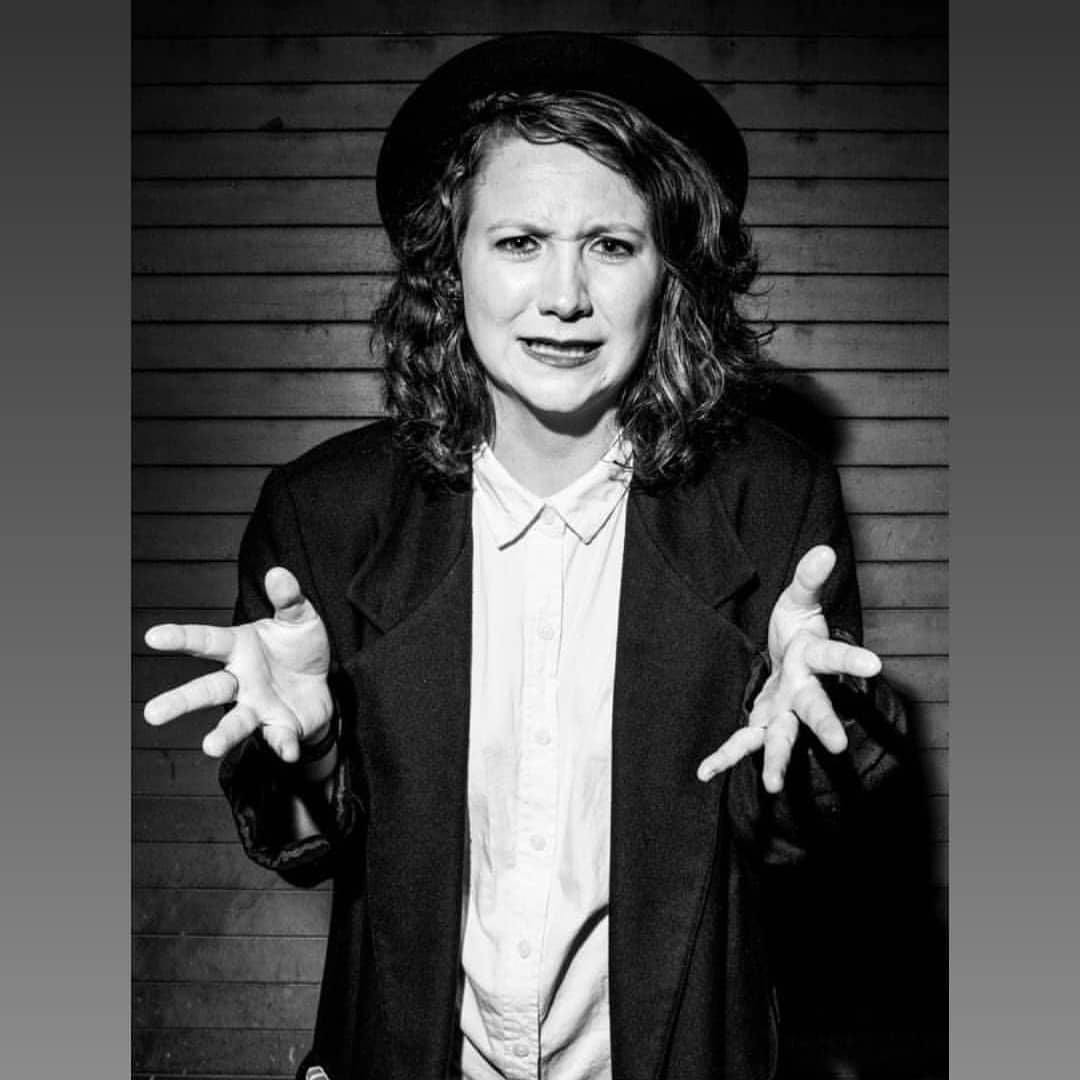 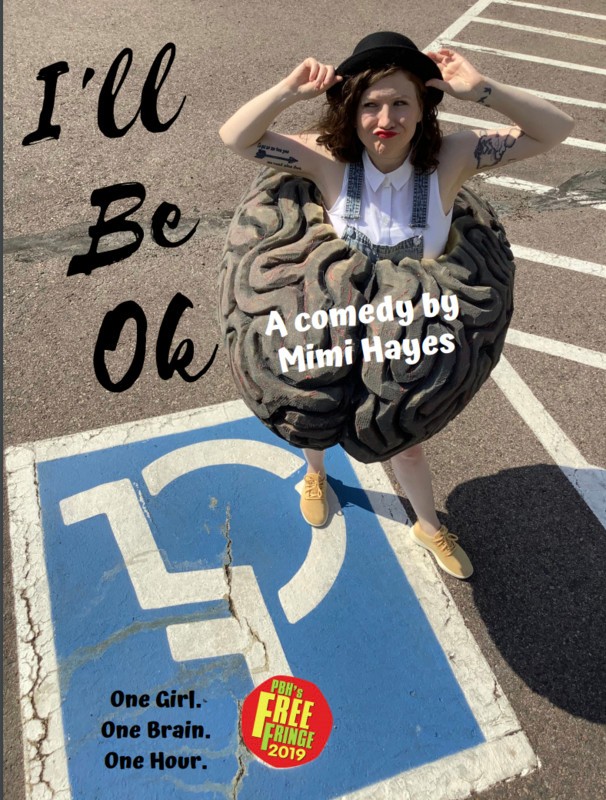 Mimi, love having you share your insights with us. Before we ask you more questions, maybe you can take a moment to introduce yourself to our readers who might have missed our earlier conversations?

I’m a brain-injured comedian and writer which I came into by what I now call my “happy accident.”

After I had a brain hemorrhage just a few days into my first career as a high school teacher, my friend told me I should “write a book” about it. To tell you the truth, I thought I was dying and I oddly wanted to leave behind something for everyone to read about.

I started writing throughout my diagnosis and recovery, documenting all the weird stuff that happened in the hospital and how I felt about my illness. It was raw and real and very cathartic.

As I healed and got “back to real life” as a teacher, I tried to write whenever I could. The book was starting to feel less like a war diary and more like a memoir. I also started doing standup comedy because WHY NOT. I mean what’s funnier than your history teacher forgetting where she put the answer key to the final exam?

Pretty soon I couldn’t juggle my creative pursuits with my career, so I quit and moved to New York City (see last prompt).

Truly, my art is my community. I didn’t know I had one until my brain injury. But it turns out there are thousands upon thousands of young stroke survivors out there, and they think I’m a damn riot! I get so much joy from making people laugh, really I do. I think I always was a performer, but becoming a comedian and telling dark jokes about my near-death really sealed the deal.

In addition to my standup and my writing, I’m a public speaker now. I’ve traveled the world talking to people about mental health, my journey, and the importance of laughter. I even did a whole TED talk about it! Isn’t that awesome?!

I’m currently in LA shopping my TV pilot, which is an adaptation of my first book “I’ll Be OK, It’s Just a Hole in My Head.” It’s a comedy/drama and it’s going to showcase the first-ever young stroke survivor as a LEAD CHARACTER!

I also coach aspiring writers and help other people explore their trauma through writing.

What I want people to know is that it’s OK to not be OK. And that sometimes laughing at yourself makes you feel just a little bit better.

Hands down, we need to stop telling little artist children that they need to grow up and get “real jobs.” As kids, we want to play and we want to create. But for all of us, there comes a time, maybe around 8 or 9, when someone tells us that we need to be realistic.

For me, that conversation came after I saw The Christmas Carol when I was 9 and saw kids on stage. I didn’t even know that was an option! After the performance, I had stars in my eyes. I knew what I wanted to be. I wanted to be an actor!

As gently as they could, my parents explained to me that acting wasn’t a job, but actually a hobby. They encouraged me to act in school plays, but that was going to be the extent of it. Actors were waitresses, they said, rushing around loud tables and hoping for their “big break” that would never come.

This crushed me as a child (and it’s something I’m still working through as an adult), but the truth is I’m not unique. Every single day an adult unknowingly crushes a kid’s hopes and dreams of becoming an artist, a musician, an athlete—simply because they are creative paths that don’t always have clear trajectories. But guess what? The world needs artists more than any other job (OK, teachers and healthcare workers are up there too).

Without art we wouldn’t have TV shows to binge or music to listen to on our morning run or paintings to decorate our homes with or podcasts to educate us or beautiful furniture to sit in or intestine clothing to wear—EVERYTHING is art. And don’t you want to encourage a young kid to make something amazing?

Also if you could pay artists, that would be great. 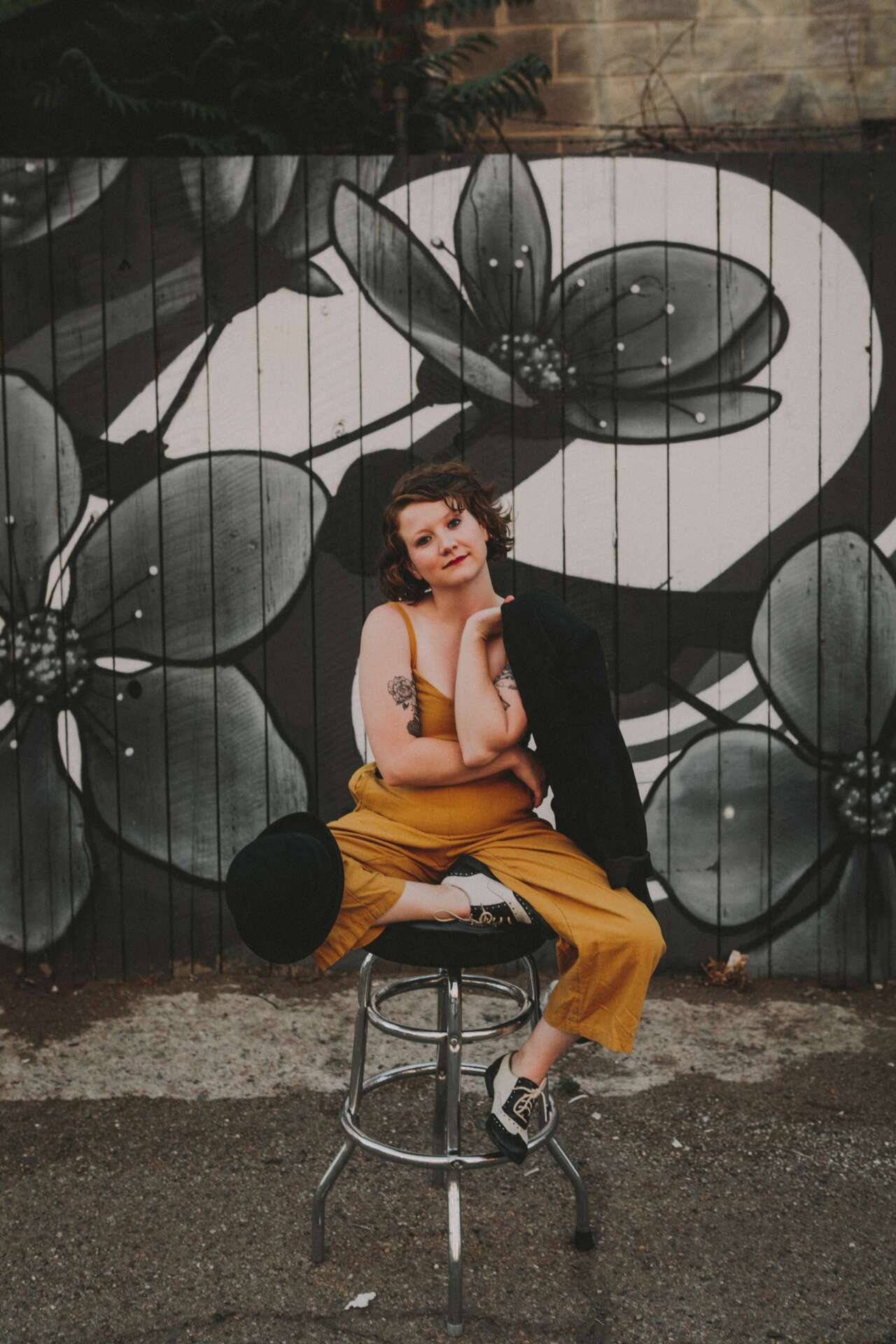 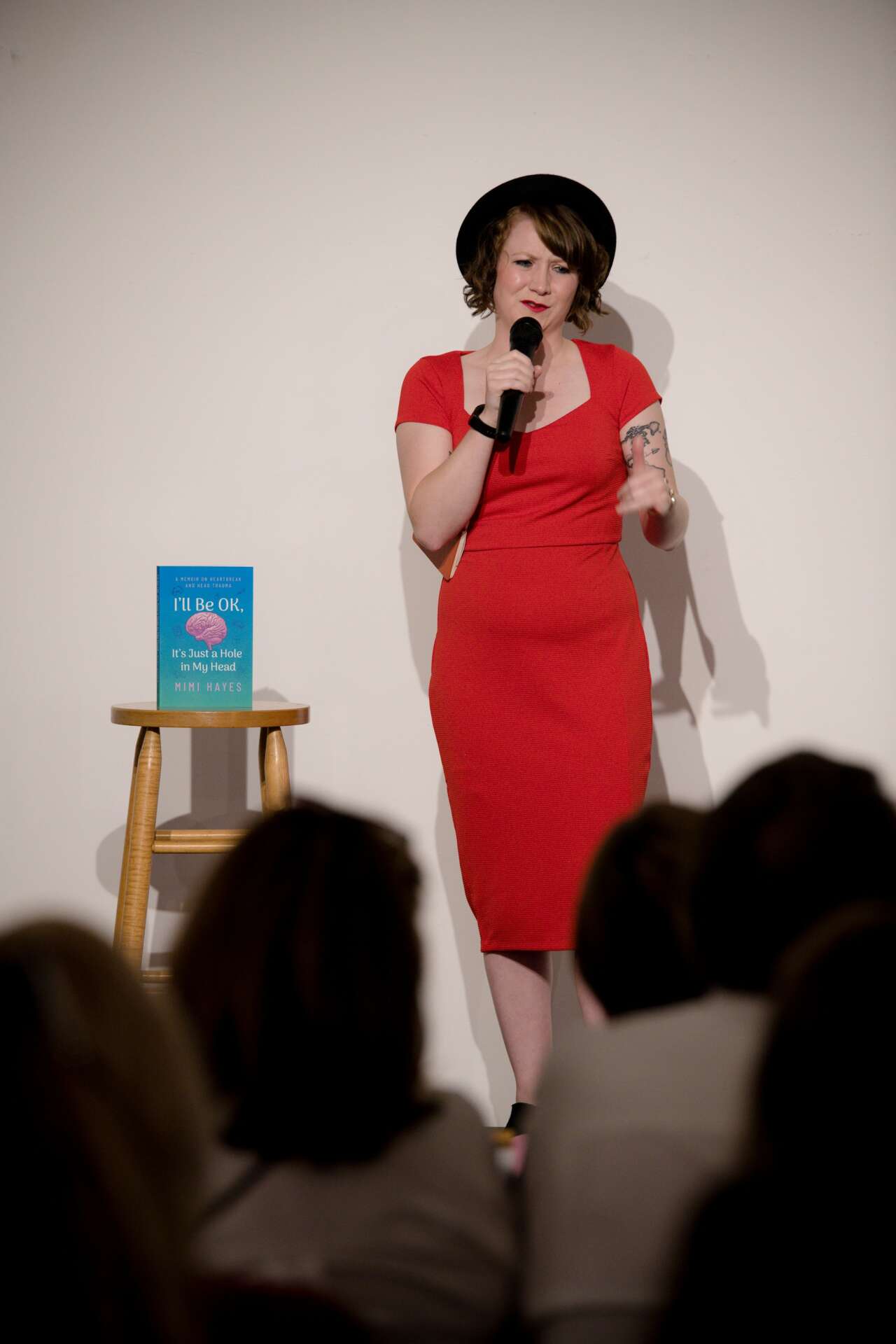 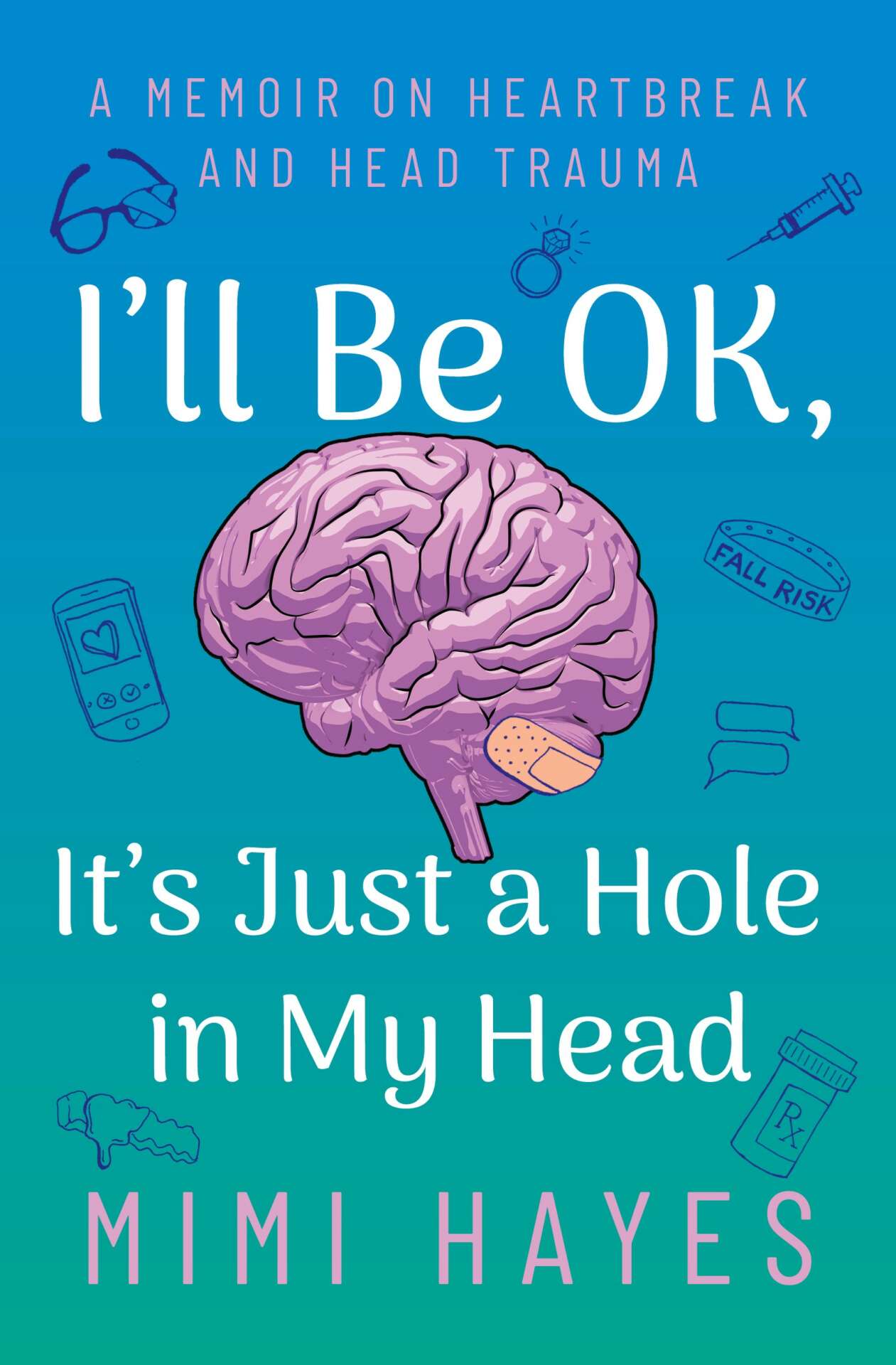 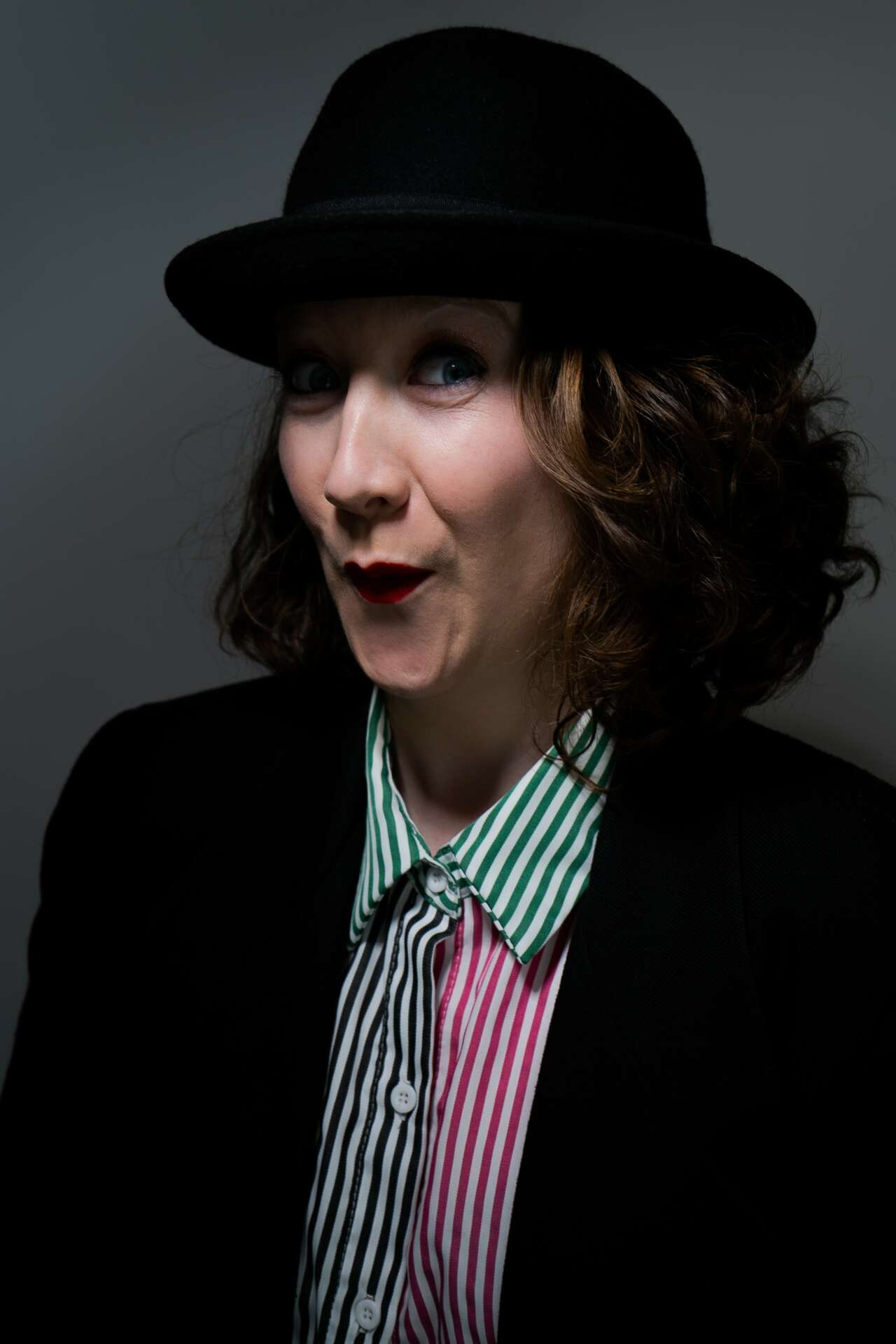 Well, I relearned how to walk in 2 weeks…how’s that?

I don’t know if I want to pick a single story so much as a general grit I’ve developed since having a brain injury. Something kind of changes in you when you’re confronted with death, and I think that whole perspective has helped me build more resilience in my life.

I took what I guess could have been a sad story and turned it into a brand and a philosophy: I’m going to laugh at this if it kills me!

And I’m not talking about that toxic positivity either, I’m talking about using humor as triage for trauma. And believe me when I say: that’s all that it is, triage. I didn’t fix my bleeding brain by making jokes. It took hospitals full of professionals, hours of physical therapy, lots of crying, a few walkers and wheelchairs, and a really attractive neurosurgeon to put me back together.

I’ll tell you this quick story though.

When I got out of brain surgery they were going to send me home (I know, I know). A very special OT in the hospital recommended I go to an intensive rehab center. Do not ask me why, but I interpreted the word “rehab” to mean “day spa.” I guess I have Hollywood stars to thank for that.

So we rolled up to REHAB and I was quite literally expecting some nice face masks and maybe a massage or two. Nope. It was a HOSPITAL. They rolled my wheelchair into my ROOM THAT WAS NOT A SPA and I started weeping. Where was my massage table? And why is this room lit with blinding fluorescent lights and not candles?

When it came time for my first therapy appointments I met with my new OT, Jenn. The very first thing she did when she met me was to kneel down in front of my wheelchair and tell me that I was brave. Then I REALLY cried! I didn’t feel brave at all. I actually felt pretty stupid. Not just about the whole day spa misunderstanding, but also because I was 22 and I didn’t know how to walk anymore. I couldn’t take a shower or go to the bathroom on my own. I was literally helpless. How could a helpless person be “brave?”

But alas, Jenn was right. I was brave. I am brave. My brain tried to break me and it failed. There’s absolutely nothing I can’t get through. Plus I’ll do it all while making really inappropriate jokes. What else can you possibly ask for in this short life?