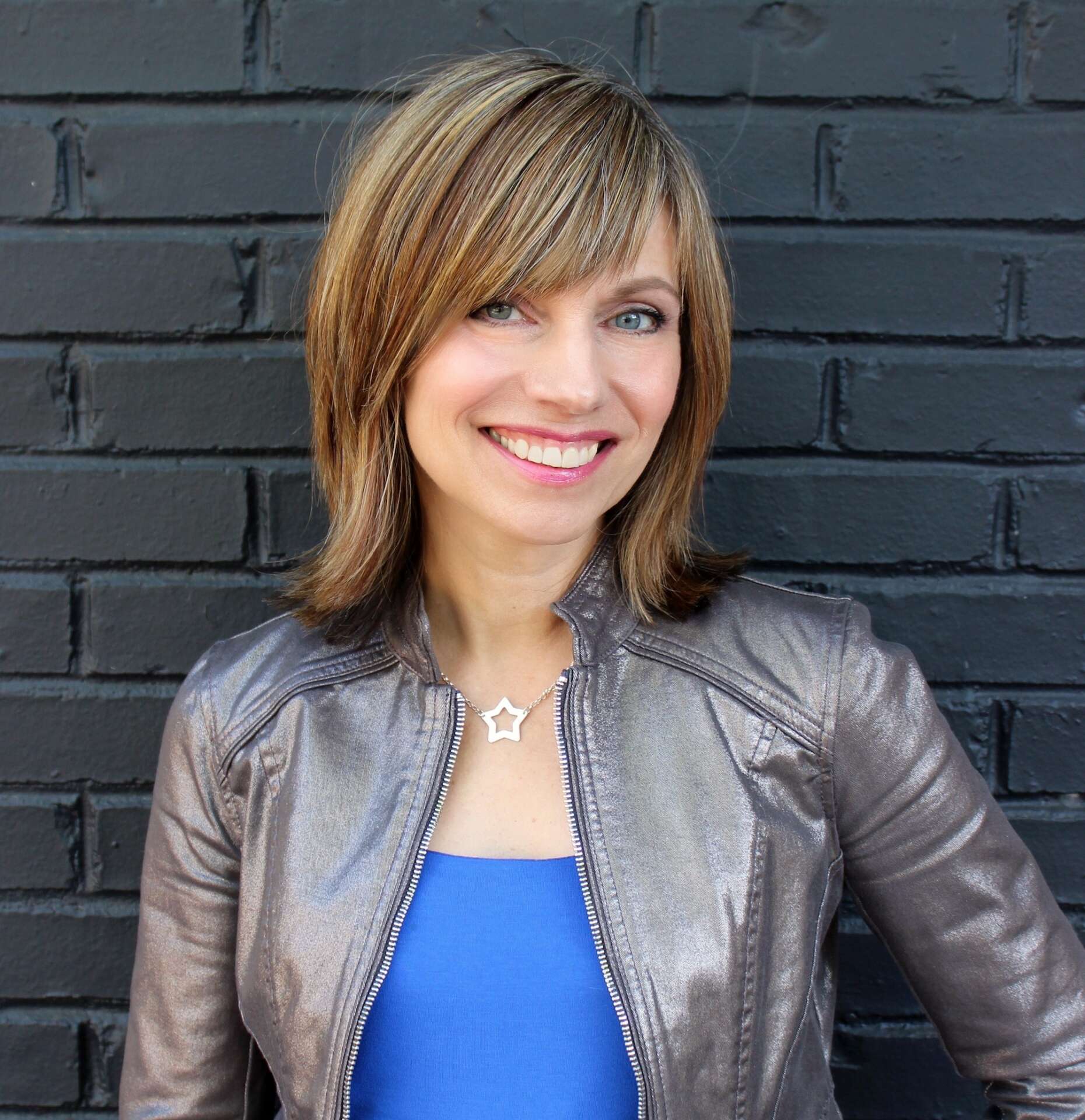 We caught up with the brilliant and insightful Lisa Yaszek a few weeks ago and have shared our conversation below.

Lisa, looking forward to hearing all of your stories today. We’d love to hear about a project that you’ve worked on that’s meant a lot to you.

The most meaningful project I’ve worked on is my Future is Female! (FIF) anthology series. I edit this series for the Library of America, a non-profit organization dedicated to preserving and disseminating the best American literature across genres—in short, this is the organization that determines what you read in your high school and college American literature classes. The first volume in the FIF series, The Future is Female! 25 Classic Science Fiction Stories by Women, from Pulp Pioneers to Ursula K. Le Guin (2018) explores how women writing science fiction in the early and middle parts of the twentieth century imagined a range of futures in which they took front and center stage in roles ranging from domestic engineers to lady astronauts and from alien queens to housewife heroines. The second book in this series, The Future is Female! More Classic Science Fiction Stories by Women, Volume 2: The 1970s, just came out in October. This new collection celebrates the rise of feminist science fiction as a unique mode of storytelling in the 1970s, complete with its own artists, editors, fans, cons, publishing venues, and awards. I think FIF2 is particularly cool because authors of this era were the first to imagine that girls and women at every stage of life—from mutant girls who inherit the postapocalyptic Earth to teens whose first periods literally stop the universe to menopausal aliens seeking sainthood to old women leading lunar revolutions–could be citizens of the future. It’s also one of the only Library of America collections to include artwork, and we’ve reproduced some amazing illustrations by both professional and amateur feminist science fiction artists of the time.

The FIF project is important to me as a feminist science fiction scholar for two reasons. First, it can double your science fiction fun! We live in a moment where we enjoy many critically acclaimed women writers of speculative fiction, including Science Fiction Grand Master and National Book foundation Medal award-winner Ursula K. Le Guin, McArthur “Genius Grant” recipient Octavia E. Butler, and N.K. Jemisin, the first author of any race or gender to win science fiction’s prestigious Hugo award for best novel three times in a row. And then of course, outside the world of the printed word, there are film directors such as Ava du Vernay and the Wachowski sisters and game designers including Kim Swift and Brianna Wu. Anthologies like the FIF series show us where all the mind-blowing, award-winning women artists we enjoy today came from, providing context for their aesthetic achievements and reminding us that women have always contributed to our visions of the future.

Second, the FIF series is dear to me because it is hopeful about the future. It’s common to hear that we live in a moment of unprecedented historical flux and that we have no guides for negotiating such rapid and widespread change. But as a window into cultural history, science fiction reminds us that we are not alone; that other people in other times and places have also grappled with monumental kinds of scientific and social change, including environmental decay, political crises, rapidly shifting demographics, and even global pandemics! Reading stories from the past can be comforting because they show us how other people have imagined surviving radical change, all while giving us templates for action in the present that might help us build new and better futures for all. 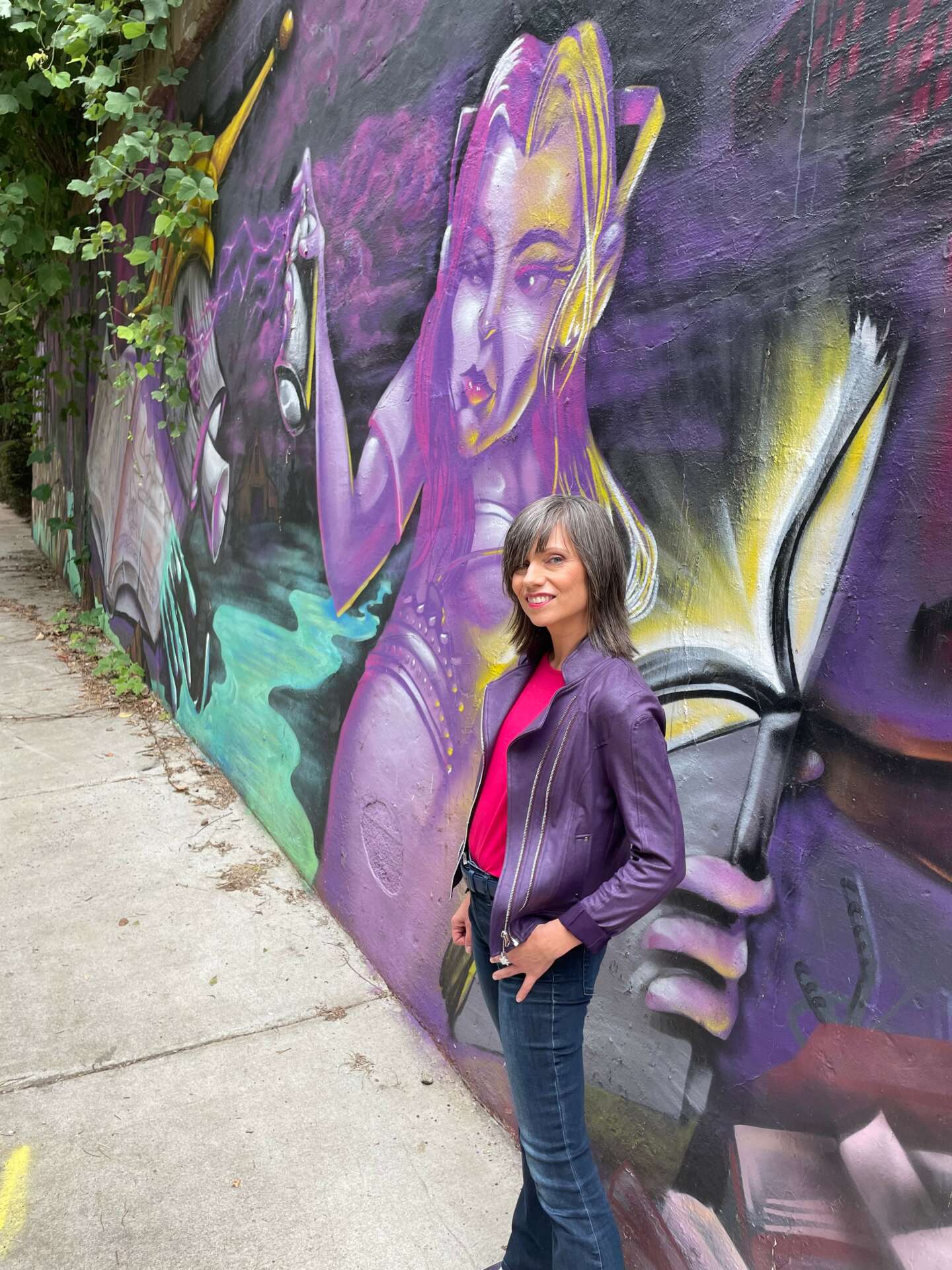 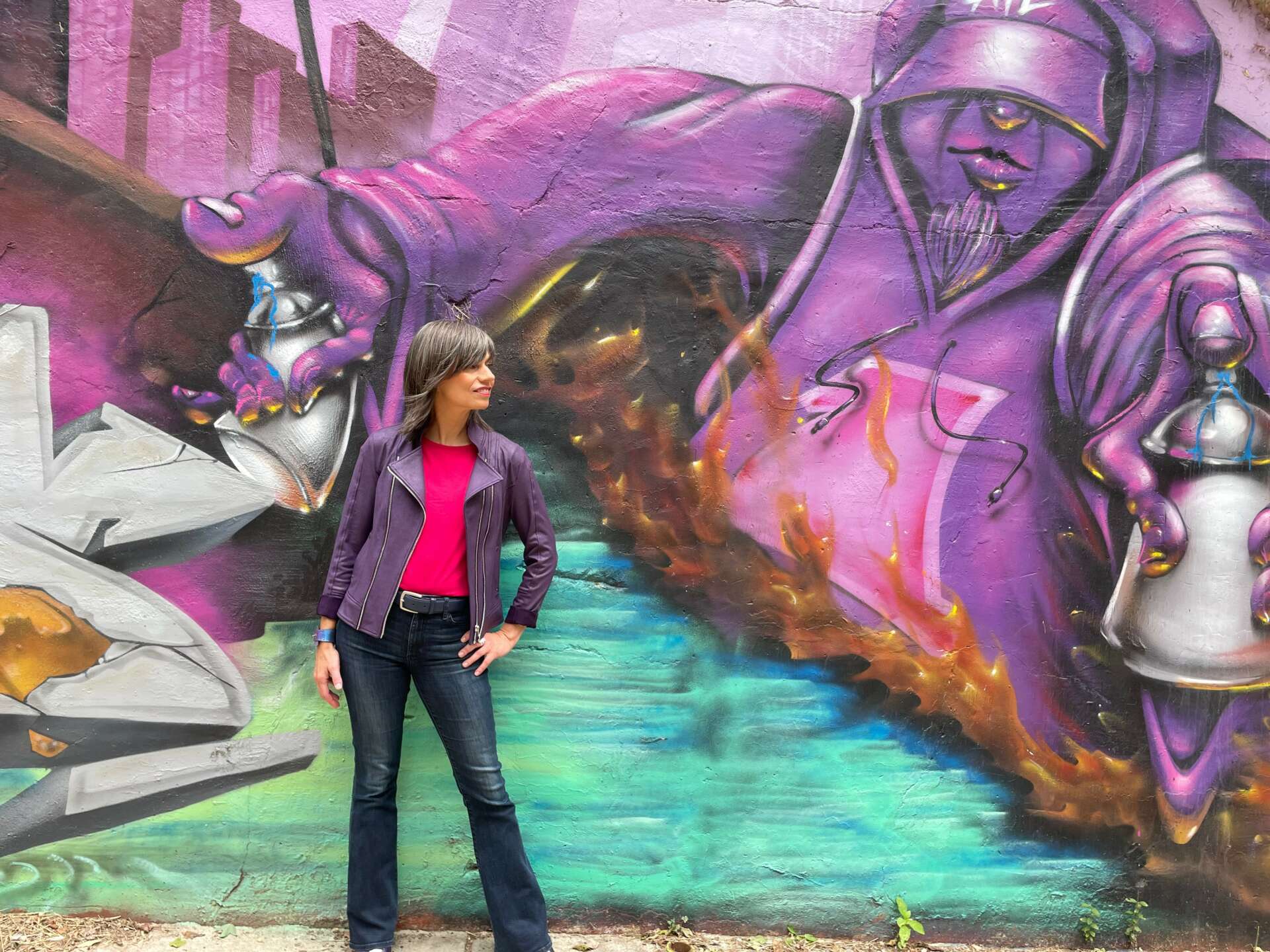 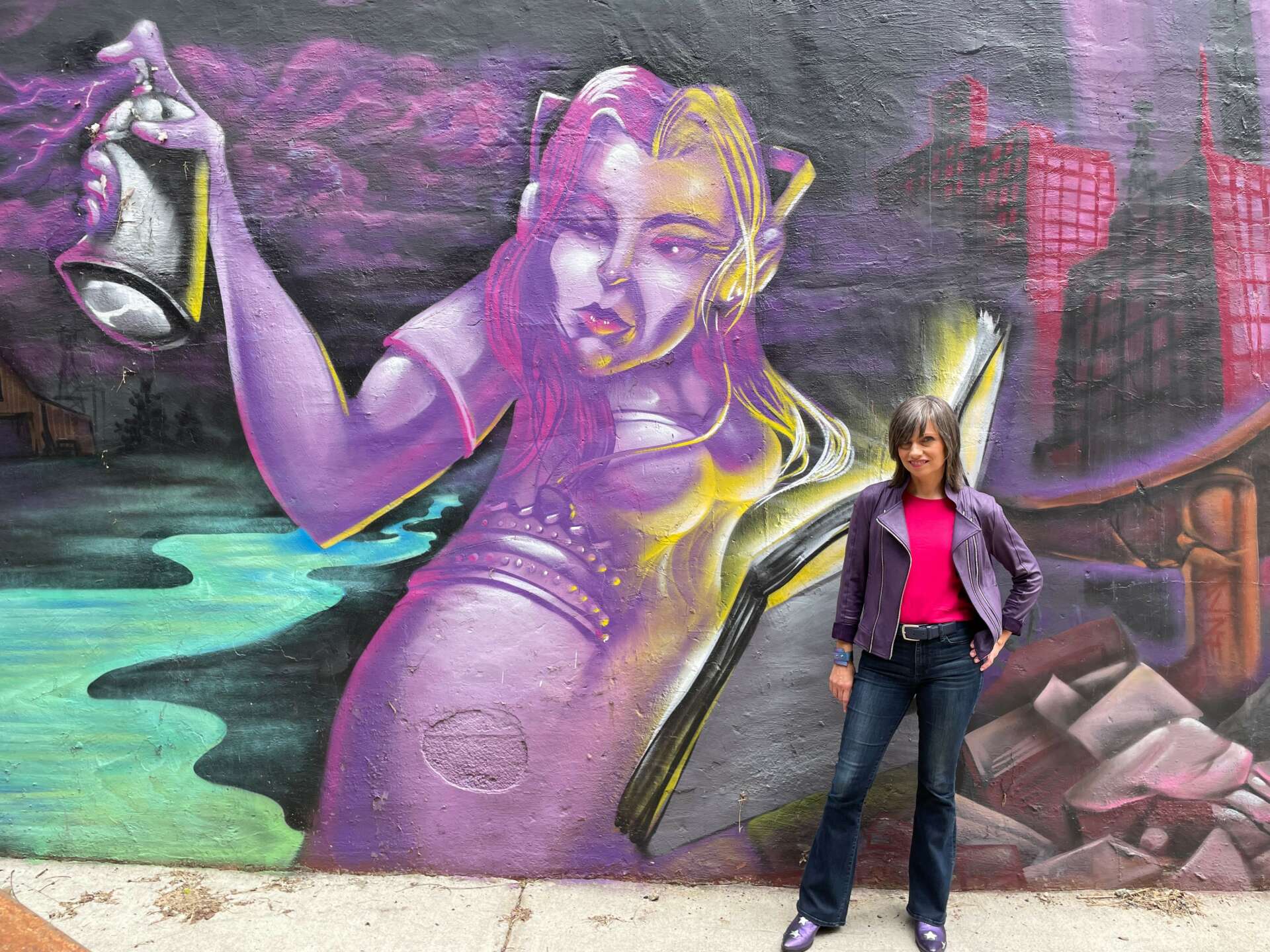 I’m a Regents’ Professor of Science Fiction Studies in the School of Literature, Media, and Communication at Georgia Tech, where I explore science fiction as a global language that allows us to share our ideas about science, technology, and the future with each other across centuries, continents, and cultures. I’m particularly interested in the recovery of lost voices in science fiction and the discovery of new ones. In academia, I’m best known for my work recovering the long history of women, Black authors, and scientists who helped develop science fiction as the premiere story form of modernity. As a public intellectual who talks about science fiction in the mass media and who provides arts and entertainment consulting, I treat science fiction more generally as a window into cultural history. We tend to think about science fiction as exploring other worlds and times, but more often than not, speculative stories are like funhouse mirrors that reflect back to us our present-day hopes and fears about everything from nuclear weapons and new reproductive technologies to high-tech fashion and the international spice trade! It’s exciting to help people see how the stories they enjoy for fun also connect them to the larger world in intellectually and socially meaningful ways.
One thing that sets me apart from many other literary scholars is my work as a public intellectual. Like most scholars, I publish books with academic presses and teach everything from introductory to graduate-level classes. But science fiction is truly a living genre that fascinates people around the globe, and so I also get to host events that connect the Atlanta-area academic and artistic communities and share my ideas about science, society, and science fiction with members of the national and international press. In terms of the former, I’ve been the academic partner for locally based science fiction events including BlacktastiCon! and the Atlanta Science Fiction Film Festival, and I am a founding juror for the Eugie Foster Memorial Award for Short Speculative Fiction, which is announced at DragonCon (hosted in Atlanta over Labor Day weekend) each year. In terms of the latter, I’ve had the opportunity to share my ideas about science, technology, and science fiction in The Washington Post, Food and Wine Magazine, and USA Today, and I’ve appeared on CBS Sunday Morning, the BBC4, Turner Classic Movies, and in the AMC miniseries James Cameron’s Story of Science Fiction. I do regular commentary for the Wired podcast, Geek’s Guide to the Galaxy and the Lithuanian art and design website, Bored Panda.

The goal of my writing and my teaching is twofold: I want to get people excited about reading fiction, and I want to get them asking questions about the way our world works. Ideally, science fiction does both! People tend to dismiss fiction—especially when it’s about other worlds and times—as mere escapism, but I think those people are missing the point. Reading science fiction is indeed escapism, but it’s escapism with a purpose. At its best, science fiction takes us to strange new worlds that refresh and release our minds, allowing us to wonder, why is this story world this way? Because it’s science fiction, we know that over the course of the story we indeed learn why the fictional world is different than our own—and that difference will feel interesting and plausible because it’s explained in reasonable, if not downright scientific, terms that correspond to those of our own world. And then ideally, in the very best science fiction, we get so used to the secondary story world that when we return to reality, all of the sudden *that* looks strange and we start asking ourselves—hey, why is *our* world the way it is? Can we change it the way people do in these stories? Do we want to do so? It’s fun to see our own world with fresh eyes, and sometimes the new perspectives we bring with us from science fiction can help us take real steps toward building the kinds of futures we want to inhabit. 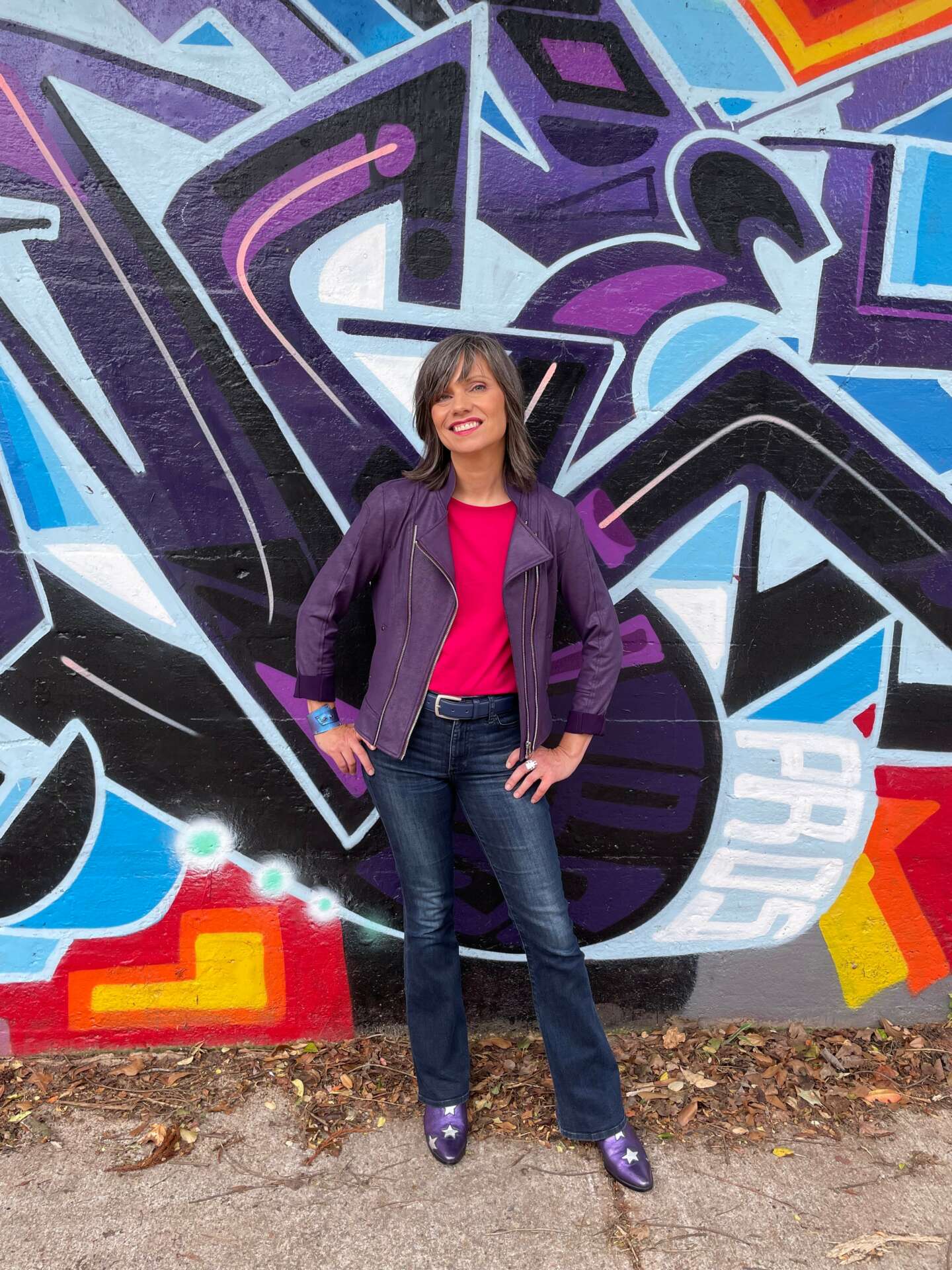 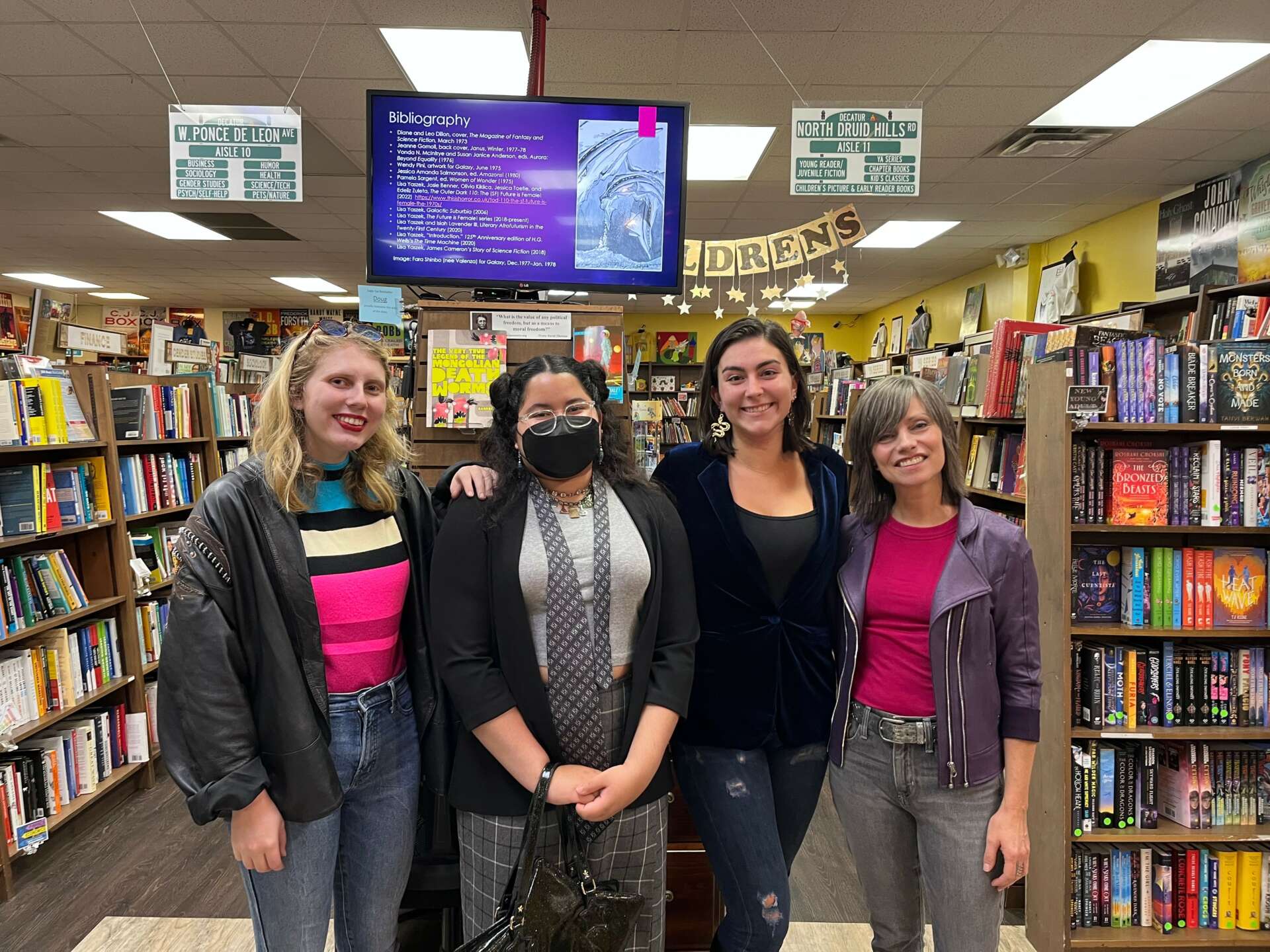 The most rewarding part of my work as a science fiction scholar and editor of the FIF series has been connecting with both the pioneering women I study and the young people I teach. The women who helped build science fiction as a distinct modern genre in the first half of the twentieth century have all started their journeys amongst the stars, but I’ve had the pleasure of meeting some of their children and grandchildren, many of whom have marvelous anecdotes about where their mothers got their story ideas. for instance, this is how I learned that Leslie F. Stone’s 1929 utopian tale “A Letter of the Twenty Fourth Century,” which imagines a future where politics, art, education, religion, and commerce move online to prevent pandemics, was inspired both by her commissioning editor’s early experiments with radio and television broadcasting as well as her own childhood experience living through the Spanish flu pandemic of 1918! I love to share this story with my students, who typically begin class intellectually impressed with Stone’s ability to predict Internet culture based on her experience with early radio and tv experiments and end up emotionally connected to her as a young woman whose teenage experiences of pandemic a century ago are more like their own experiences with the Covid-19 pandemic than they ever could have imagined.

By way of contrast, many of authors and artists featured in the second FIF volume are still alive, and it’s been an honor and a pleasure getting to know them! I’ve been especially thrilled to work with Pamela Sargent, one of the first feminist science fiction authors and editors. Sargent’s “Women of Wonder” anthology series was the first to collect science fiction stories by women across time and space and is very much the inspiration for the FIF series. It’s also been exciting to connect with other authors I’ve been reading for years, such as Marta Randall, first female president of the Science Fiction Writers of America, and artists I’ve admired including Fara Shimbo (who published science fiction art as Anji Valenza) and Wendy Pini.

Working on the FIF series has also allowed me to connect with young peoples in meaningful ways beyond our usual classroom interactions. I’m listed as the sole editor for the FIF series, but it really does take a village to produce these volumes. My commissioning editor and I wanted to make sure the FIF volumes ended up in the hands of the young people who are literally building our futures on the ground today and we thought the best way to do this was to create student research and design teams to help with story selection and volume production. To that end, I’d like to thank Miranda Fyfe, Kaitlin Shea, and Cody Trawick, who did the biographical research for FIF1; “DJ Baker, who designed a special variant of the Library of America logo for the FIF series; and Josie Baker, Kate Heffner, Olivia Kiklica, Jessica Taetle, and Edeliz Zuleta, who ranked stories, wrote biographies, and selected artwork for FIF2. If you’d like to hear this latter group talk about what it means to be young women reading old feminist SF in an era when stories of better futures are more important than ever, I hope you will check them out on the Outer Dark #110, “The [SF] Future is Female!” at  https://www.thisishorror.co.uk/tod-110-the-sf-future-is-female-the-1970s/. These young folk are the real People of Wonder who are building better futures for us right here and now. 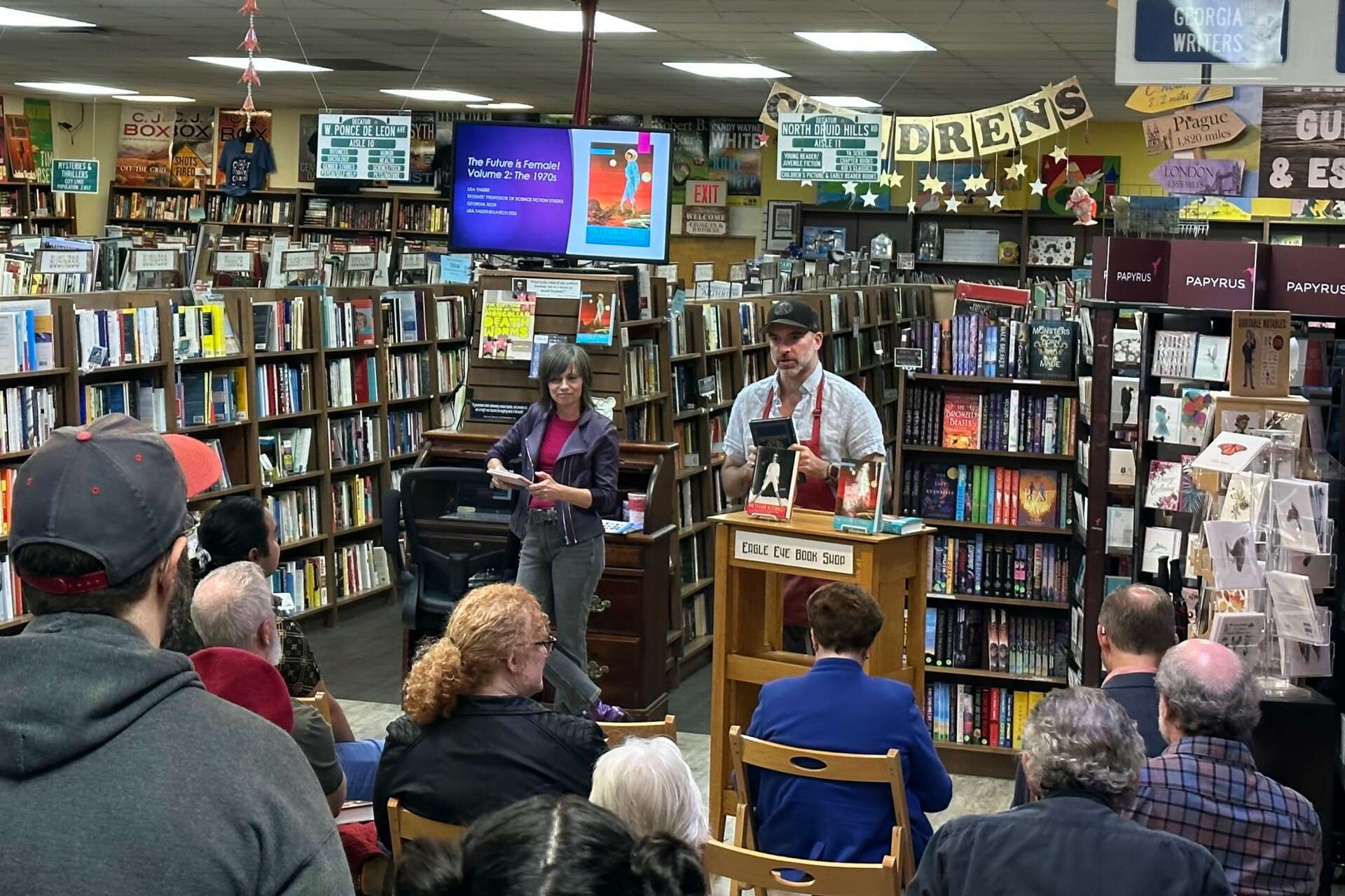 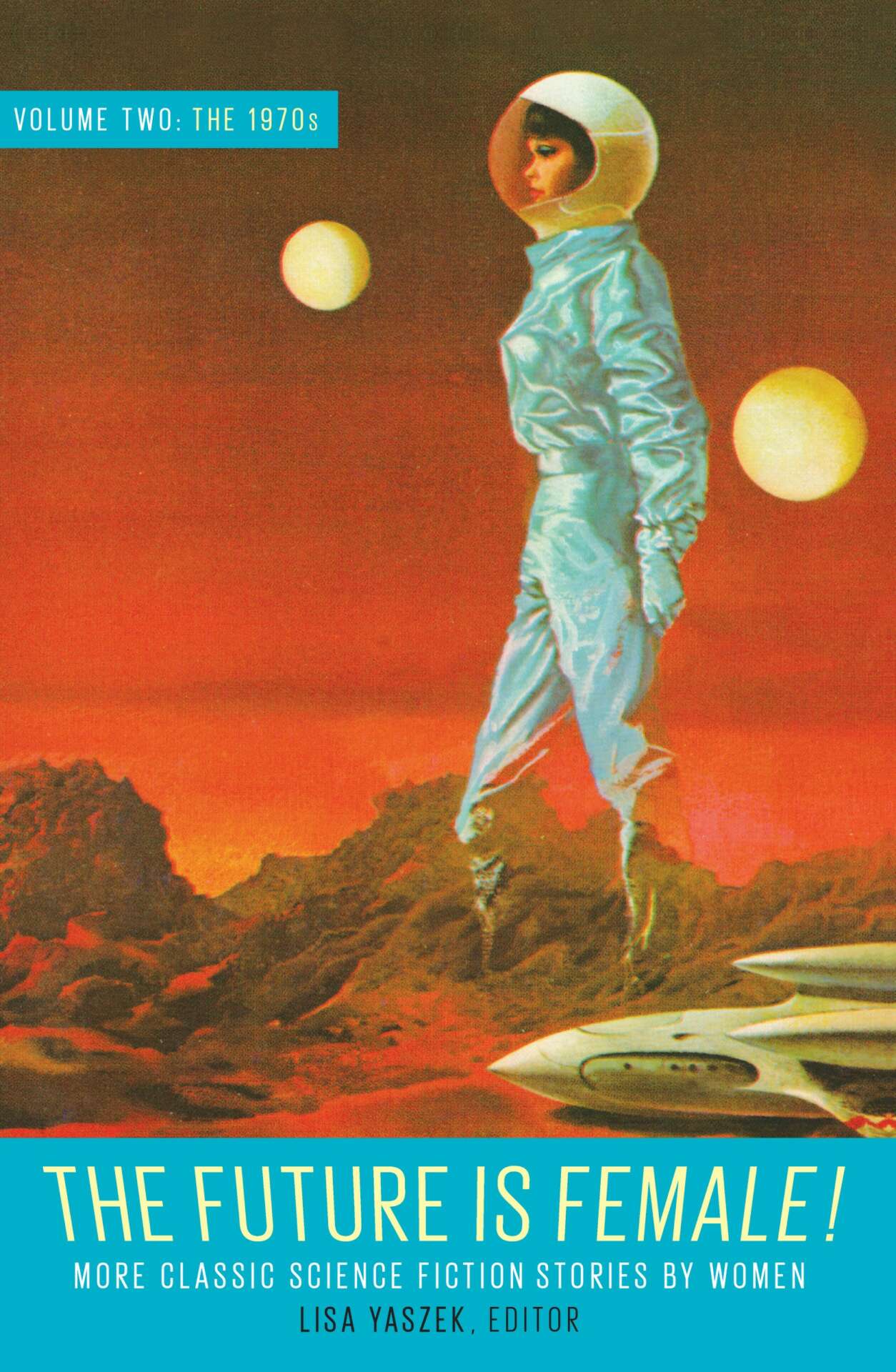 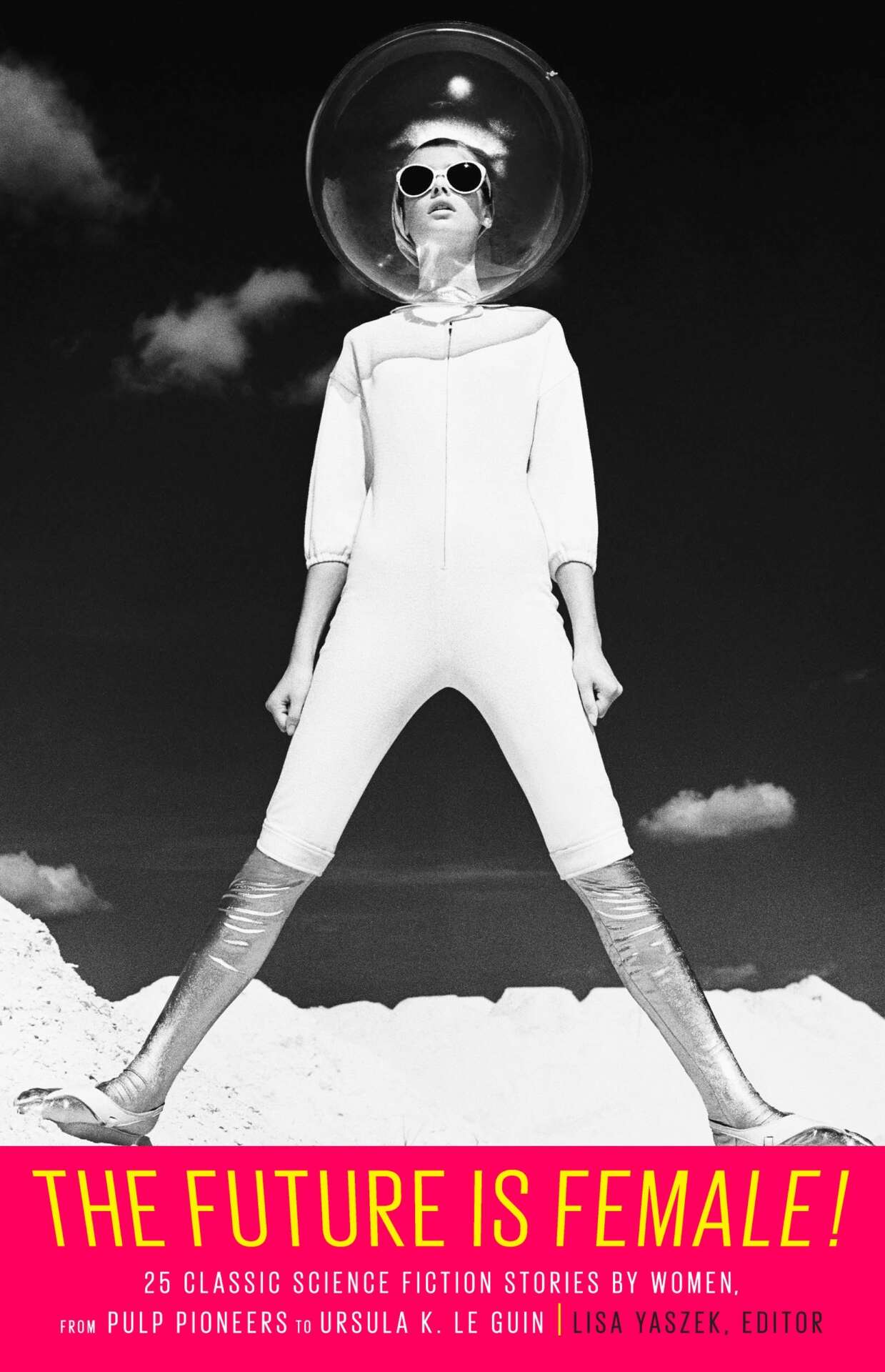