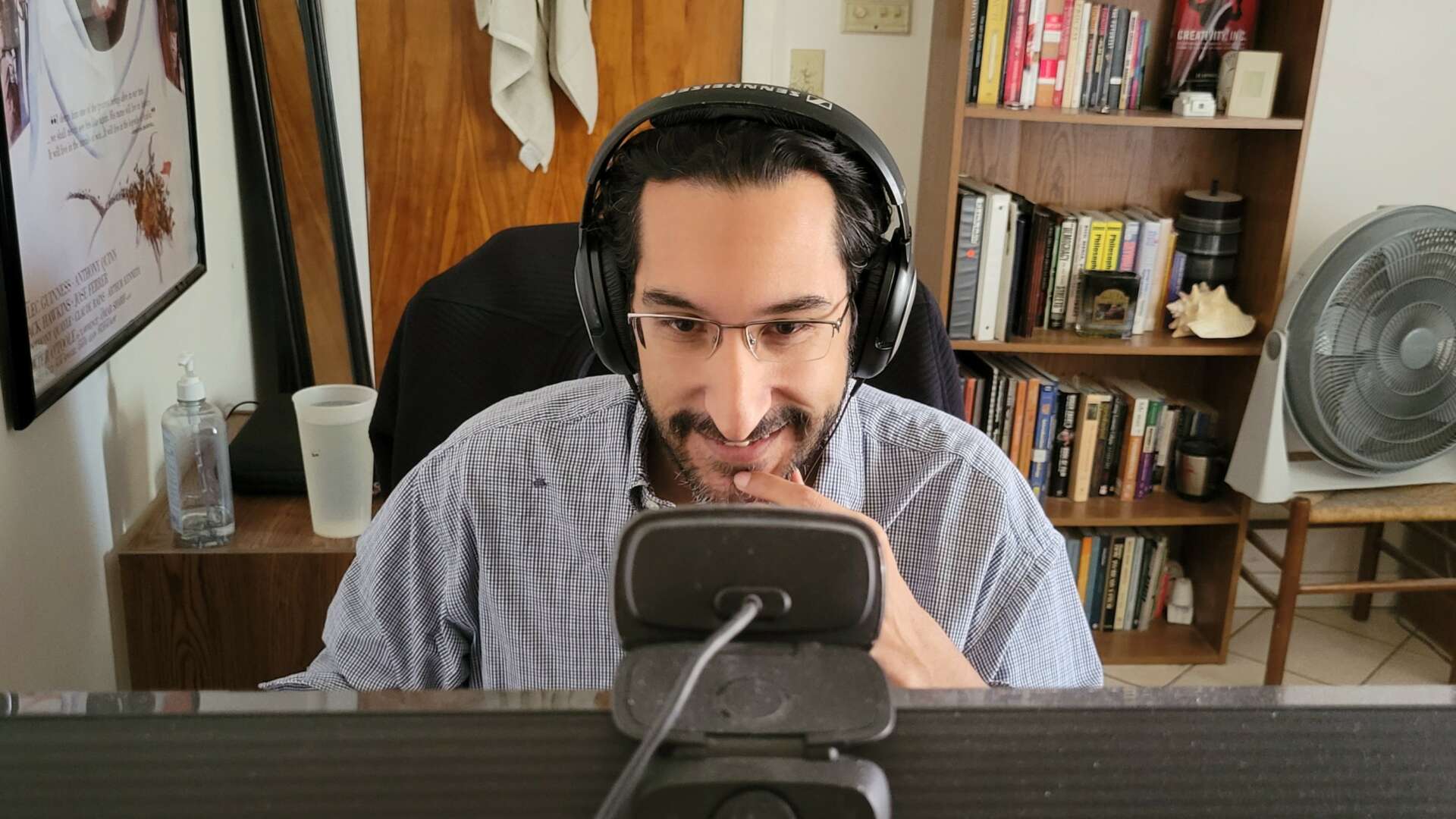 We caught up with the brilliant and insightful Gabriel Rhenals a few weeks ago and have shared our conversation below.

Gabriel, thanks for taking the time to share your stories with us today What’s the kindest thing anyone has ever done for you?

Between July 31st and August 29th of last year, I spent a total of 28 hours working with one Andrew J. Garcia over video call using both Zoom and Skype. However, we weren’t convening at such length in service of some interchangeable company to determine the course of any variety of banal corporate directives. Quite the contrary, we were creatively collaborating on my second and most ambitious feature film to date, State v. Unknown. Andrew, an experienced stage and improv actor, was cast in the lead role of Cal Modesto on the film. Three years ago, he acted in a one-scene supporting role on my debut feature film, For My Sister. Quite the generous promotion!

For nearly every day of production, Andrew was required to memorize and perform up to ten pages of dialogue. I was initially wary about asking so much of Andrew, despite being as well-versed as he was in acting, but my uneasiness would quickly be laid to rest. On the first day of production, Andrew showed up to bat with all of his ten pages’ worth of lines memorized. To so great an extent was his familiarity with the text that we were able to nail our daily scene quota without the slightest bit of lag. He would engage that same degree of preparation on every single day of work on the film.

For someone who’d never carried an entire feature film before, Andrew demonstrated an unreal amount of discipline, resolve and focus. It was certainly a win-win scenario but Andrew bringing those qualities to bear on the production of my humble feature film project was the kindest thing anyone has ever done for me and I’ll never forget it. Thank you, Andrew! 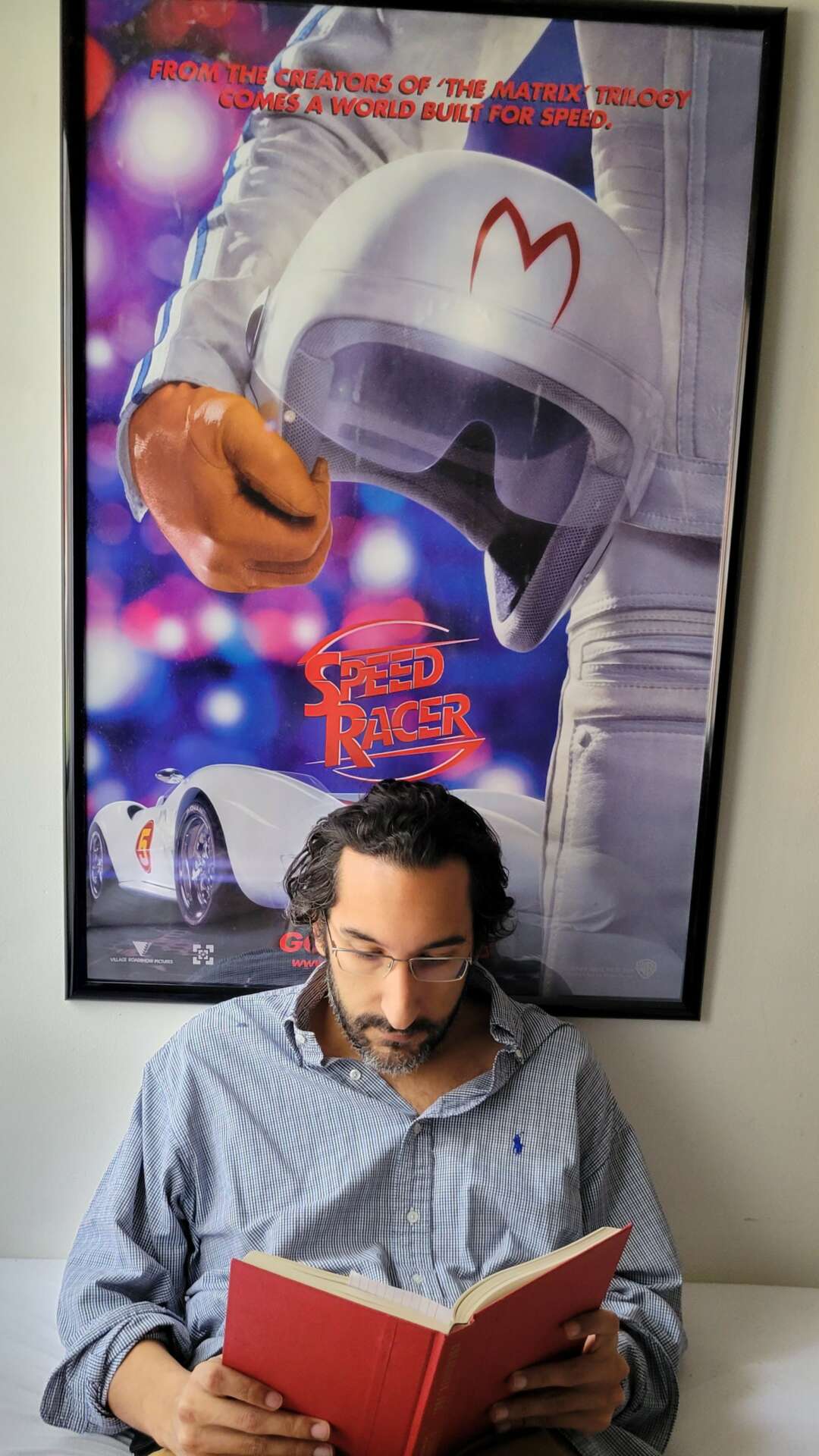 I’m an award-winning, Miami-based filmmaker. My debut feature film, For My Sister, was completed in 2019 and is now available to stream on Amazon, YouTube, Tubi and Roku.

I began my career making short films when I was 16 using my dad’s digital video camcorder. Since then, I’ve written, produced, directed, shot and edited 16 short films. My work has been exhibited at various film festivals, both domestic and international, and in 2018 I was featured nationally on the National Endowment for the Arts-funded PBS television show, film-maker.

Operating as an independent artist, I’m now squarely involved in the practice of making feature-length films for general audiences. Up to now, all of my projects have been self-funded but I am interested in seeking outside resources and funding for future projects.

I believe what sets me apart from most other independent filmmakers is that I am very much a one-man band. My twenty years’ worth of experience in filmmaking has equipped me with a technical and aesthetic aptitude that allows me to operate nimbly and effectively on my own – even on the scale of feature-length films. But despite my hopeless auteurist leanings, I still routinely depend on the collaboration of various actors and actresses as well as my go-to music composer, Dr. Ben Morris. And I’m always glad to do so!

Lastly, I would like to properly introduce my second and latest feature film, State v. Unknown. The film presents an account of one of the most shocking abuses of civil society in the City of Verity Falls’ history. It’s a drama/comedy and features an amazing principal cast (Andrew J. Garcia, Lorean Mapp, Mia Scornavacca, Florencia Barletta and Juan Iglesias) in addition to a sizable supporting one. The making of the film was pandemic-proof as it was able to be executed completely remotely amid the ebb and flow of the ongoing coronavirus pandemic. State v. Unknown is currently in post-production but it will see public exhibition later this year (and hopefully festival exhibition as well)!

The most dramatic pivot in my movie-making career was deciding to completely abandon a conventional pictorial approach to filmmaking on my latest feature, State v. Unknown. This dramatic pivot was set in motion, unsurprisingly, by the pandemic which saw me cancelling production of a script I was finishing just as the world was ramping up its lockdown and social distancing measures. With production of that script proving an impossibility in the foreseeable future, I weighed my options. Consequently, I decided to shelve that earlier script and adapt to the changes occurring in my environment by crafting a film idea more suited to these unprecedented circumstances. This new script could be accomplished using webcam technology exclusively. It was an exciting prospect but one which would require a major sacrifice.

With State v. Unknown, I wouldn’t be relying on particular staging, lighting, composition or editing in the manner expected of the traditional approach to filmmaking. Indeed, I would have to jettison my nearly two decades’ worth of cinematic design experience and understanding; instead, embracing the idea of employing shoulder-up recordings of acting talent as the dominant filmic element.

State v. Unknown is the greatest gambit of my artistic career but I believe a true artist should avoid repeating their successes or those of others and advance into uncharted territory as often as they can. Regardless of how the film is ultimately received, I rest somewhat comfortably knowing I took a substantial risk as a filmmaker and tried something new and different. 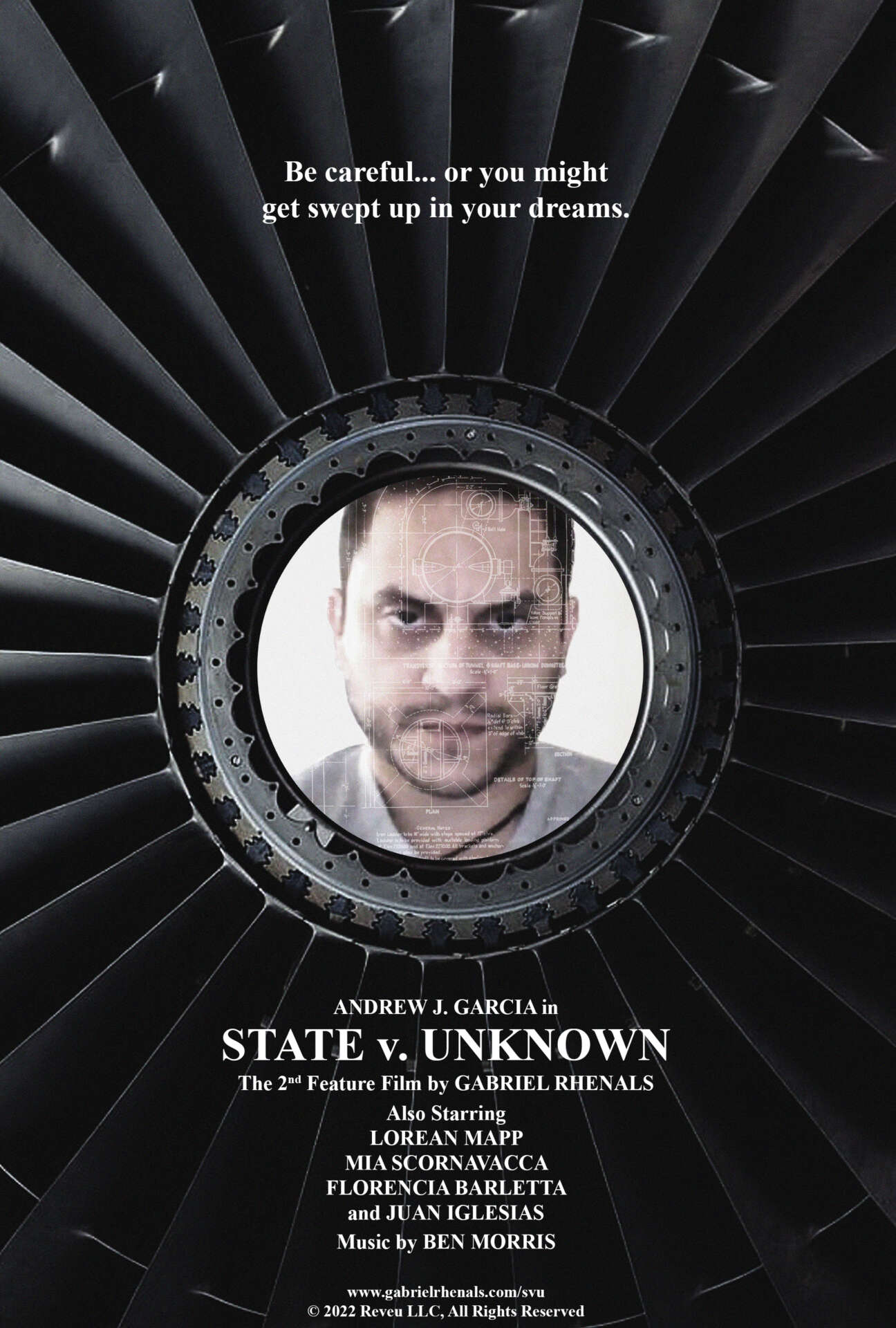 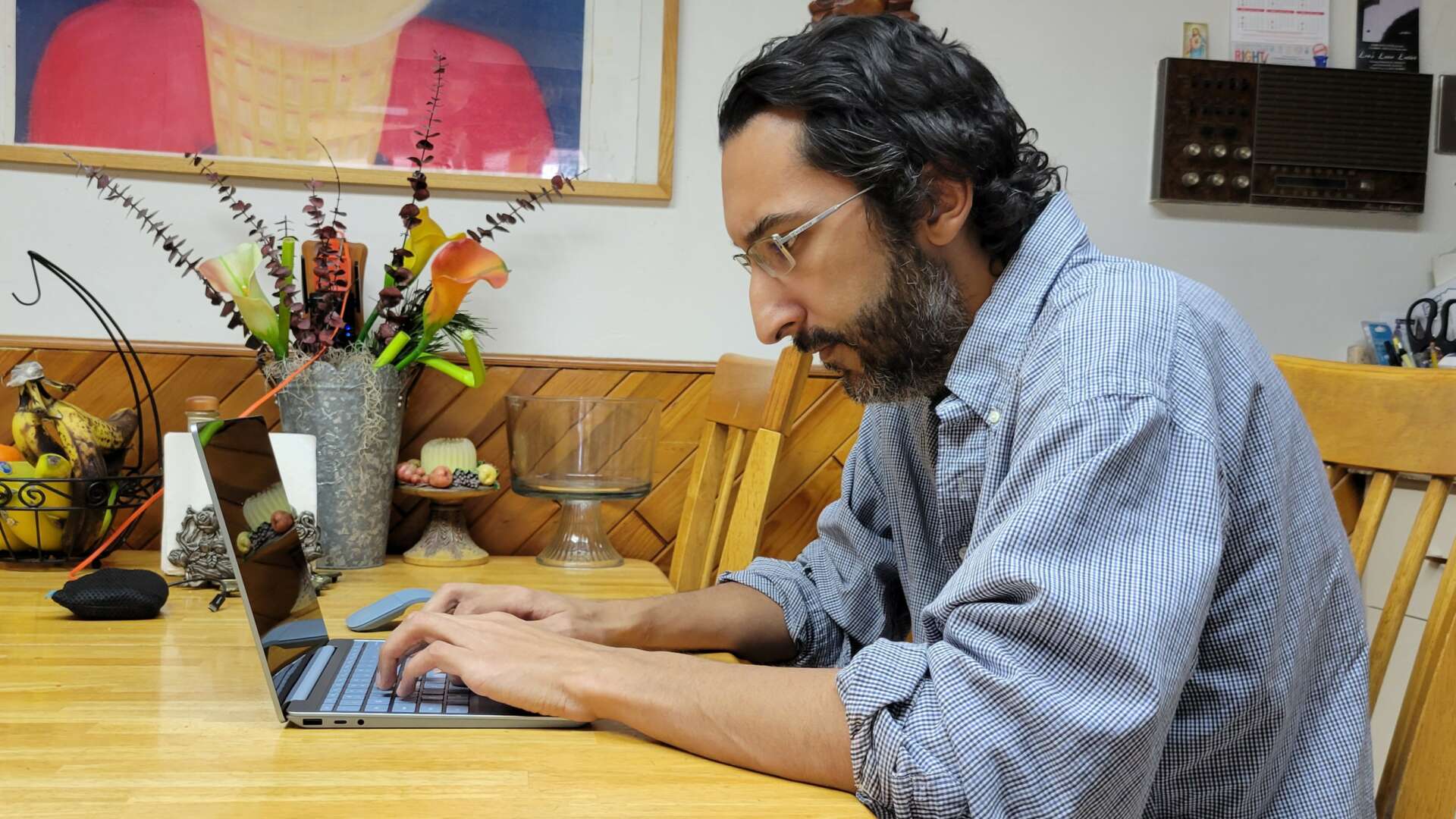 I’ve actually been on a major reading kick since the start of the pandemic! Quite obviously as a result of greater solitude engendered by the pandemic, I’ve kept up a habit of leaping from one book to the next in an unbroken chain since the coronavirus first reared its ugly head. With topics ranging from psychology to philosophy to biography to classical literature, the simple act of ravenously seeking out books on topics of great personal interest is an activity I waited too long to so raptly adopt. And the selected titles have certainly influenced me in many respects.

Among the books I’ve read as part of said journey, I will say that Solitude: A Return to the Self by Anthony Storr revealed to me the scientifically-backed value of alone time and its critical importance in the lives of creative individuals. How to Win Friends and Influence People by Dale Carnegie exposed me to a series of great interpersonal habits to cultivate based on timeless moral principles. And lastly, Creativity, Inc. by Dr. Ed Catmull presents an unsparingly candid look at the unique workplace culture and management style of Pixar Animation Studios.

What I’ve said about these particular books is of course just the tip of the iceberg in terms of the sheer quantity of knowledge and wisdom they have to offer. More important than any book or encapsulated description of them is the value of simply opening oneself to the experiences and teachings of others who’ve made the uncommon effort to gather their thoughts clearly and cogently in the form of a book. It’s a constantly rewarding gift which not only continues to shape my artistic work but also general experiences in life.

As a particular quartet of dried fruit from the West Coast would say, “Books… check ‘em out!”