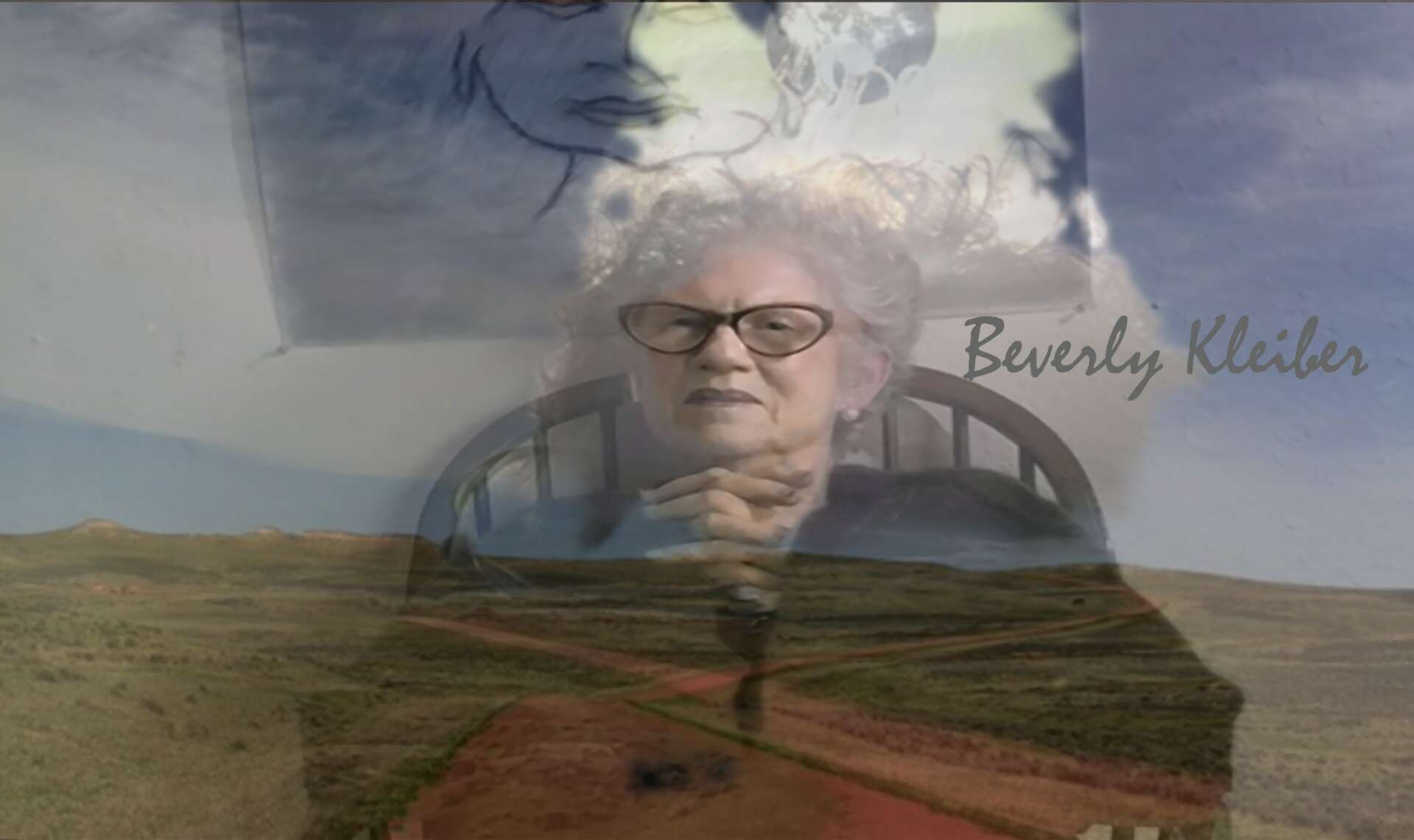 We were lucky to catch up with Beverly Kleiber recently and have shared our conversation below.

Beverly, looking forward to hearing all of your stories today. What’s been the most meaningful project you’ve worked on?

I would say the stained-glass window called “Birth, Growth and Return” seems my most meaningful project given the span of years and umbrella of its message. Over 40 years ago an architect named Jim Ishimaru commissioned me to do a large stained-glass window for his office. I called it “Birth, Growth, and Return.” The design starts on the upper left with a tightly woven funnel-like form in deep jewel colors. As the form advances around the corner, it begins to loosen. It passes through a circular form which in Zen painting is called an Enso. The Enso can refer to the reaching for perfection in an imperfect world. As the streamers pass through the Enso they loosen, and the colors become brighter. In the last third the streamers become elongated and earth-like in tone and disappear into the ground.

When Jim sold the building he couldn’t part with the window, which, by the way was 7.5 “H X 19” W, so he crated it up and saved it for the last 40 years. Now it looks like he has found a home for it at last. Since its not settled yet I can’t say where, except to say it’s the most appropriate place I can imagine. 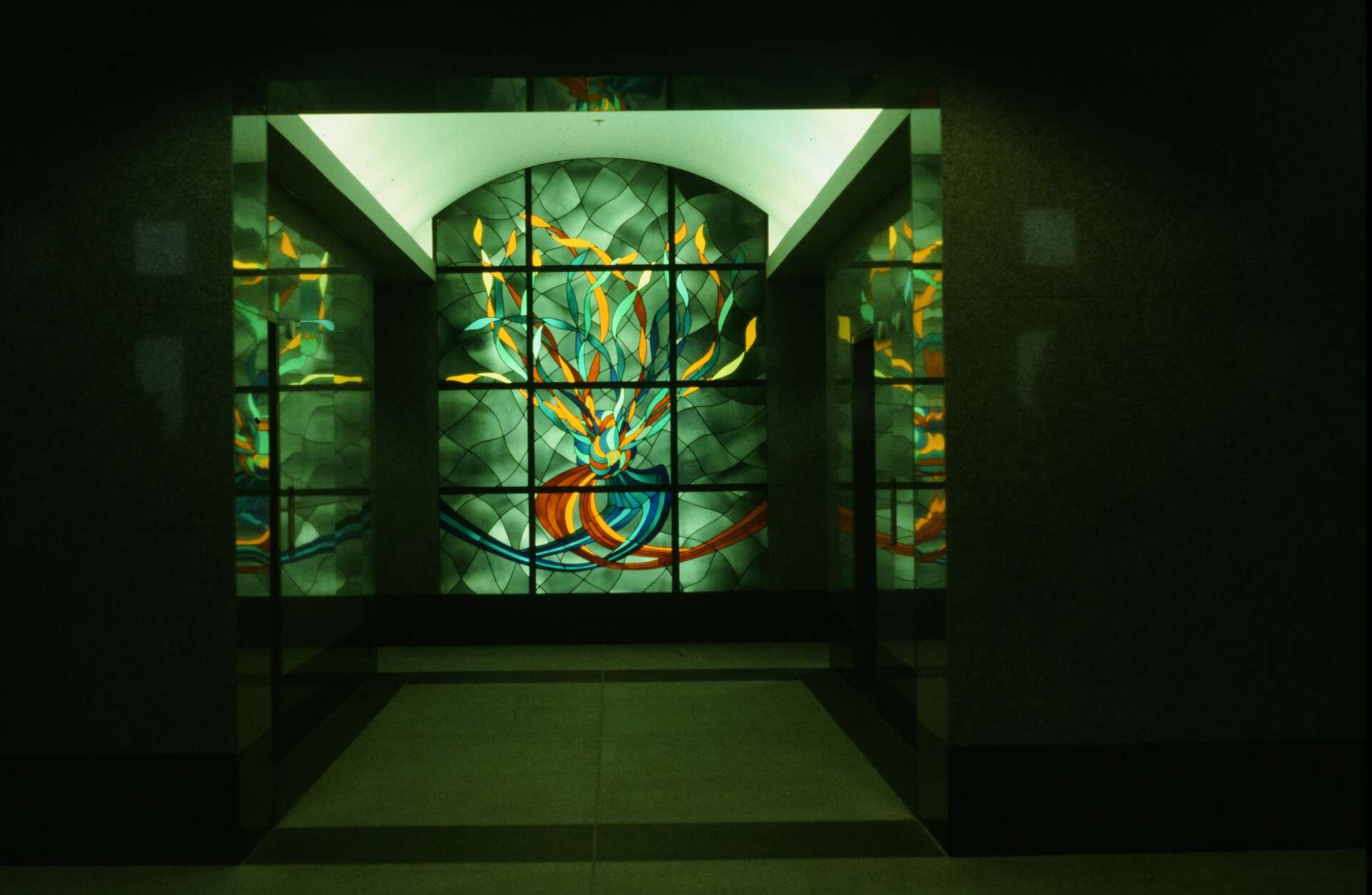 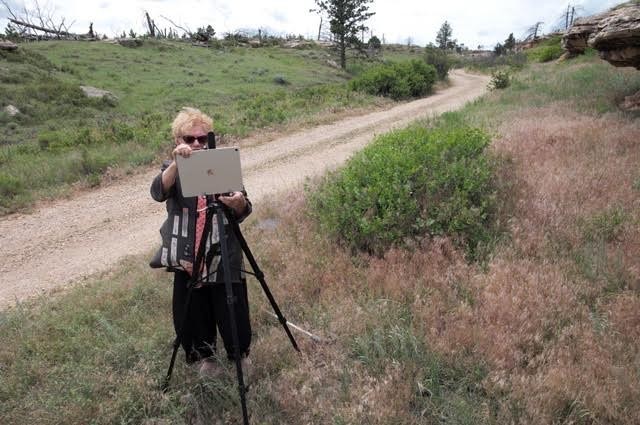 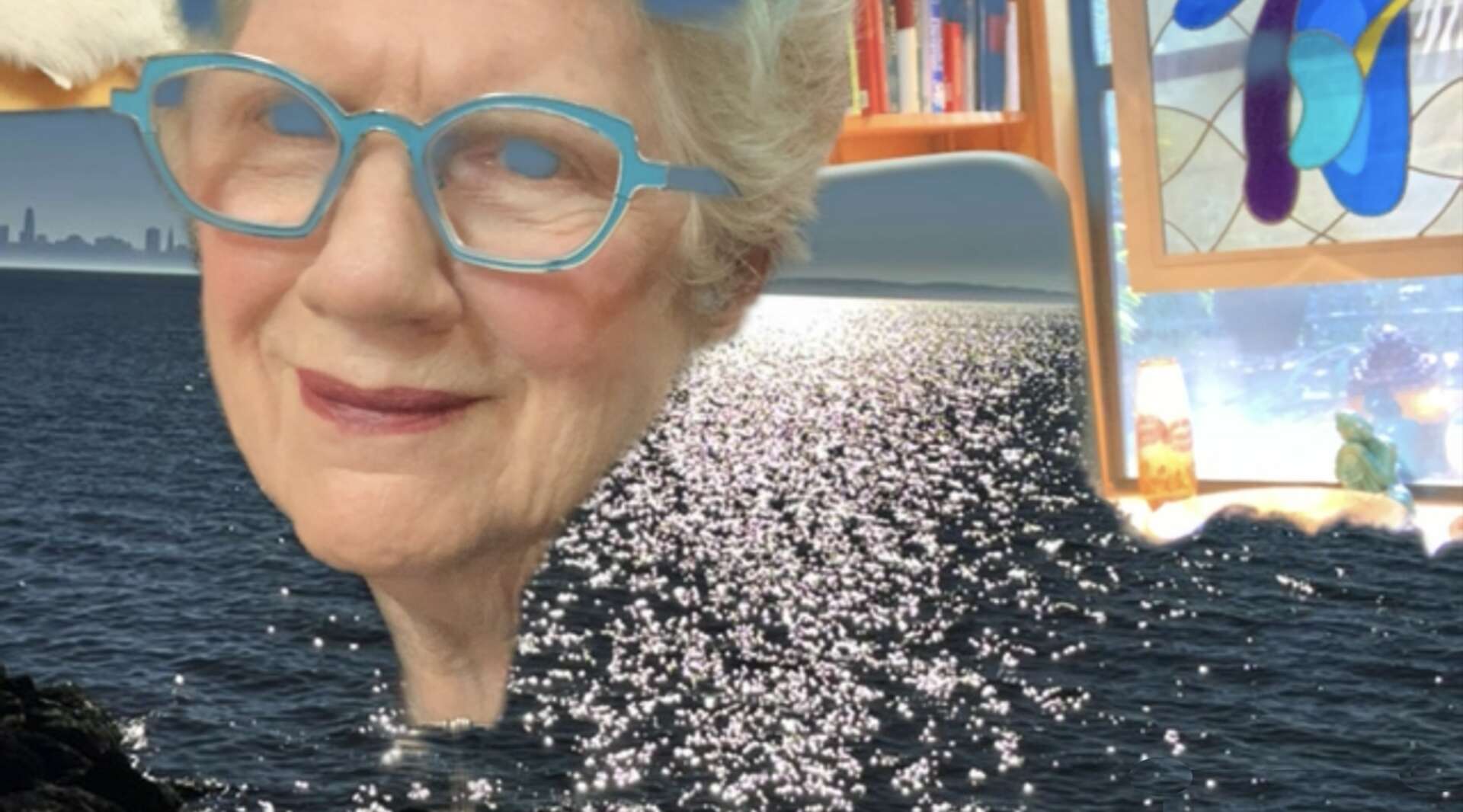 Beverly, before we move on to more of these sorts of questions, can you take some time to bring our readers up to speed on you and what you do?

Enraptured by the mythos of the American West, My grandfather Hans Kleiber struck out for the Wyoming Wilderness. After years of mapping glaciers, fighting forest fires, and surveying The Medicine Wheel, he became a “full time artist” and built a log cabin studio.

In later years, I spent many lovely nights drawing plans for my future projects in this log cabin at the foot of the Big Horns.
The austerity and majesty of this place has colored my soul.

Later, I lived in what was to become Silicon Valley and came of age as an artist in the early 1990’s when the tools for interactive multimedia became available.

I created environments with computers cobbled to video cameras and sound devices. So, in my latest body of work, “zoomhallucinations”, I’m taking yet another new tool and cajoling it into communicating my artistic statement about the human condition.

In my pictures vast landscapes of the Wilderness invade, crash into, and become one with the human face. It is this oneness of Humankind and Nature that I try to evoke.

In the “here and now” what all this filters down to is my current body of work which I’m selling both in its purely digital form or as a chromoluxe print on metal.

You asked for a story that illustrates resilience. I have one just off the top of my head. One time when I was working in stained glass, a corporation that sells Insurance for eyeglasses, etc. Asked me to do a large-scale work for their corporate headquarters. It was at the center of the lobby visible inside and out like a visual anchor for the building.
I was very excited to do this project, so I made a drawing to present to the vice-president. He looked at the drawing, seemed a bit puzzled, reached for the drawing, turned it upside down, and said “It belongs this way”.
I was stunned and devastated – momentarily, that is. Then I looked at it and thought, well, design-wise it still works upside down. It’s a different piece but still a good piece. The difference between his piece and mine was that his was more inviting and mine was more challenging. I could understand why he would choose the more inviting for his headquarters. He made the right choice for how the piece would be used in his company facility. Which may explain how he got to be the VP. 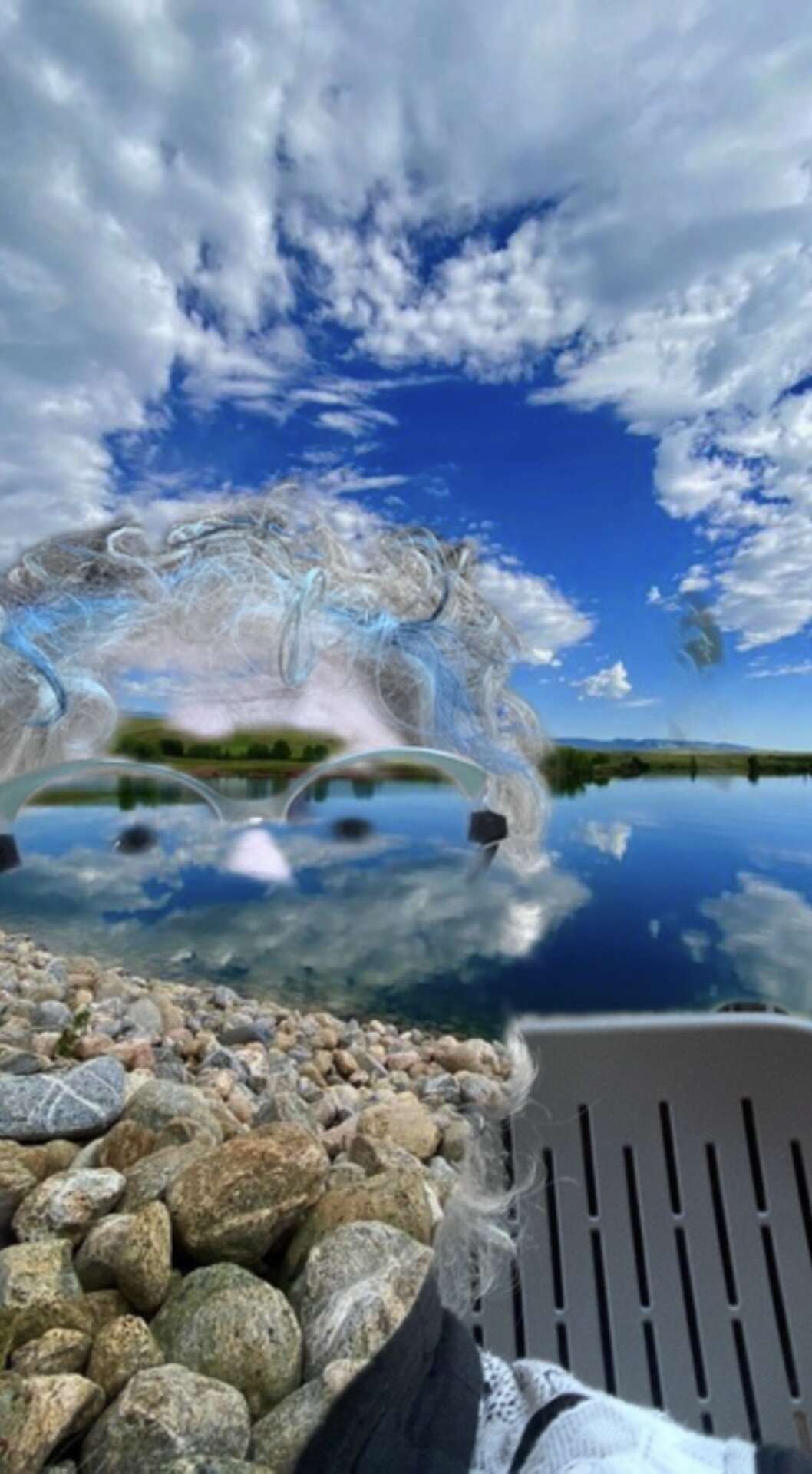 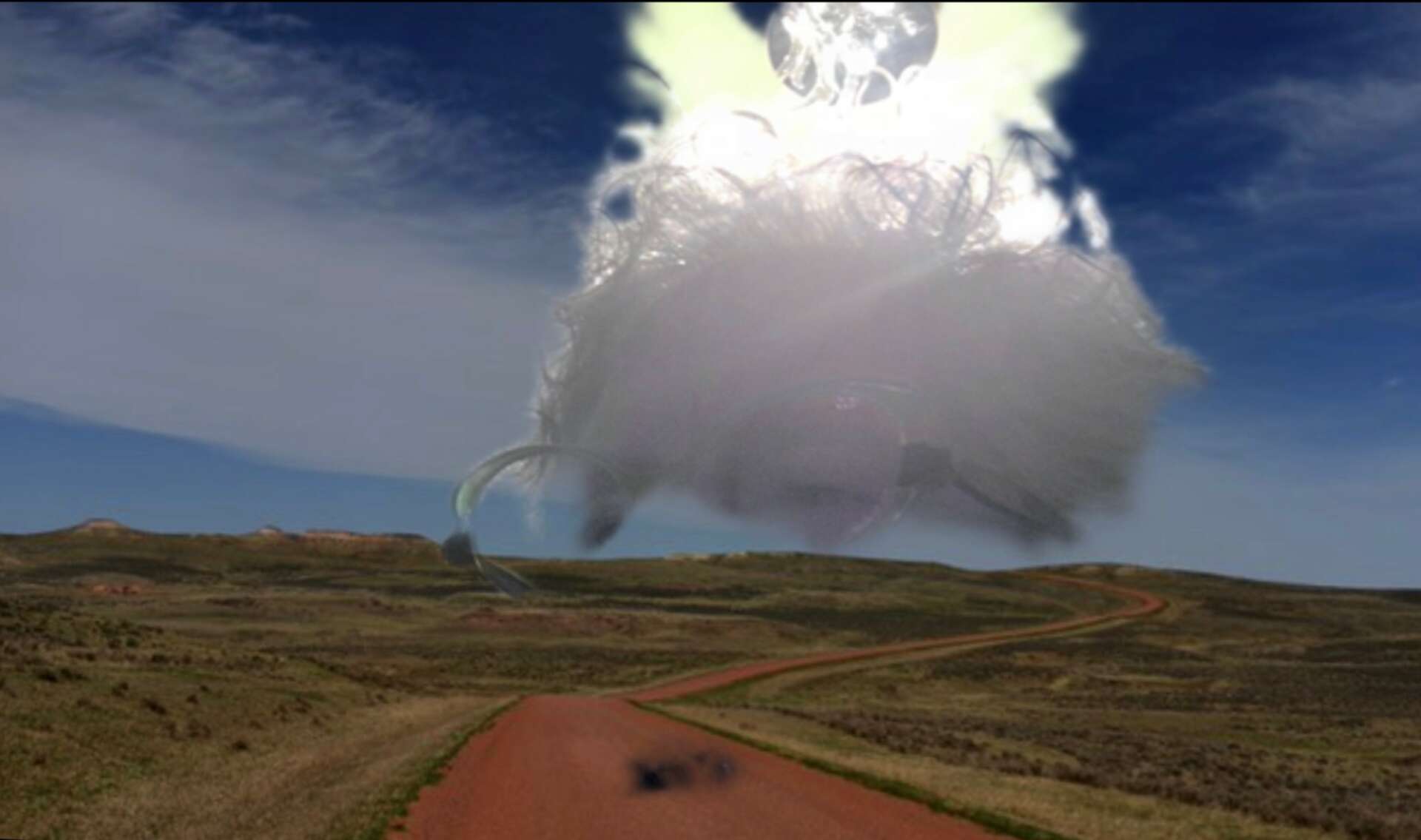 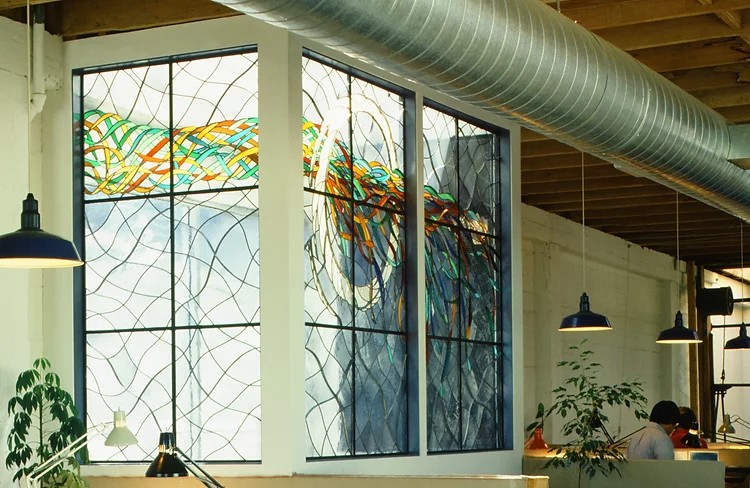 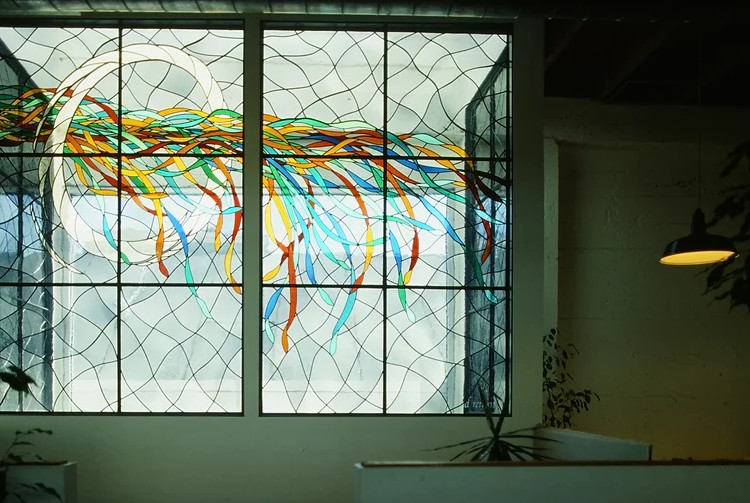 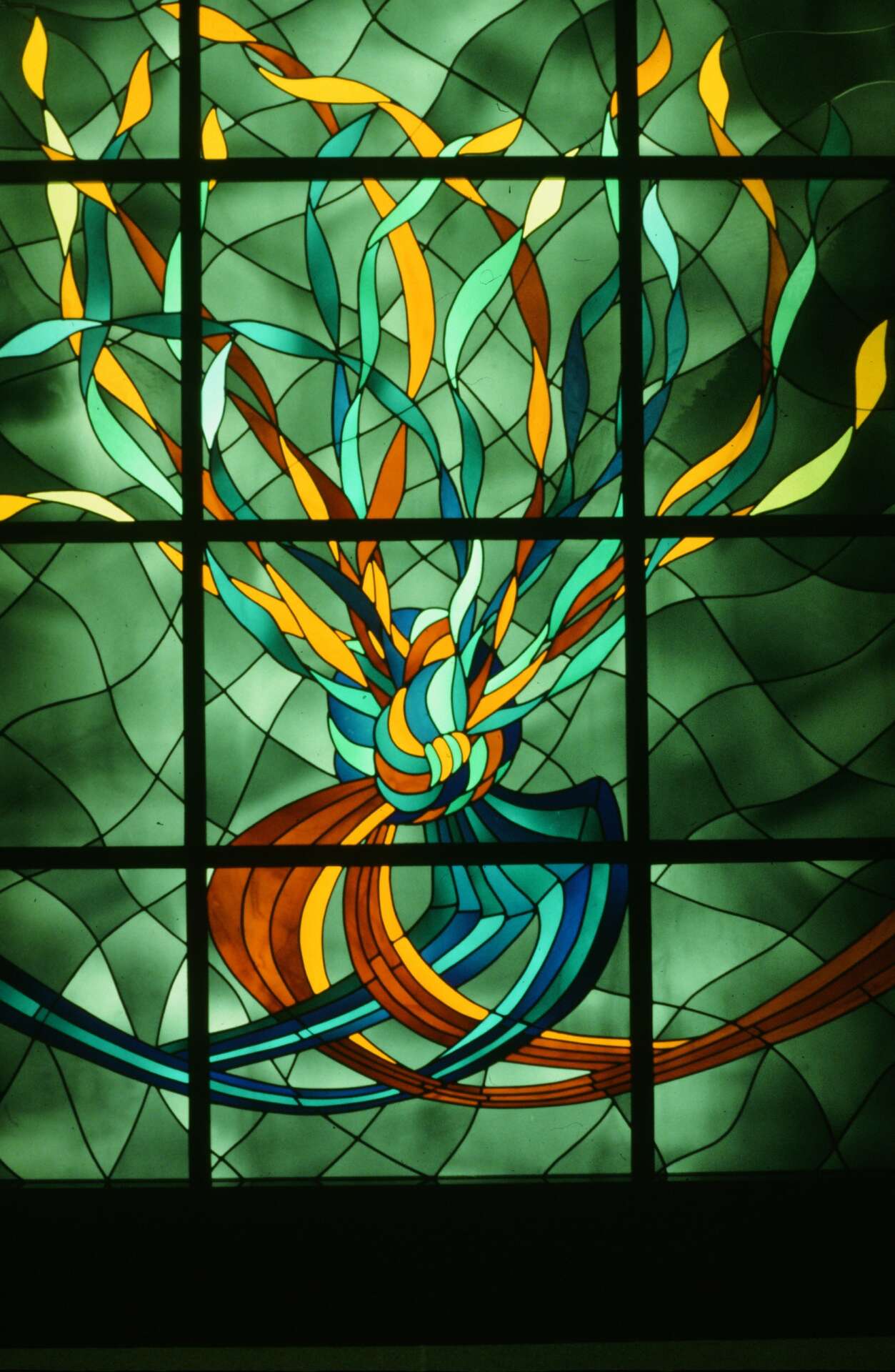 Is there a goal or a mission driving my creative journey? Am I an artist with a mission? In my early years at the dawn of interactive art I was certainly driven to create work that required the viewer to be a participant. This may not seem so extraordinary today but given the tools available in the 1990’s it was quite a reach. The New Scientist, a British journal wrote an article called: “And an Elephant Dancing” about this process or struggle depending on how you look at it. Please see pictures for this article which can also be found in the archives of the New Scientist. As for current missions I hope to promote this awareness of the “Oneness” that I have referred to earlier.